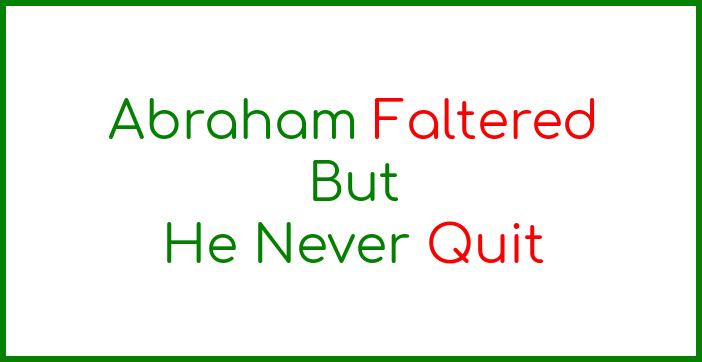 Yes, sort of. He had conjugal relations with his wife’s handmaid, Hagar, who gave birth to his first child, Ishmael. It isn’t the worst case of adultery but adultery it was. Here are the facts:

Abraham, prompted by God, moved to Canaan from Haran when he was 75 years old. A part of the enticement to move was the promise that Abraham would become, not an average nation, but a great one, a tacit promise of children.

Abraham was 86 years old when Ishmael, his first child, was born. This was anything but usual. For the previous eight generations his predecessors began having children in their early 30’s. By normal standards, Abraham’s first child was fifty plus years late.

That means Abraham’s paternal instincts were already frustrated when he left for Canaan and it was eleven years later before he had his first child, which, unfortunately, was not the child God promised.

During his first years in Canaan he had several difficult experiences in which he demonstrated either great weakness or great strength. They shed light on the underside of his relationship with Sara.

Shortly after arriving in Canaan he encountered famine and decided to leave for Egypt where he lied about Sara, saying she was his sister not his wife. He followed this strategy because he was afraid for his life, or so he said more than once.

Abraham knew that prominent kings took influential women into their harems at will, eliminating any husband that might get in the way. It was a good strategy if the “widowed” woman came with followers.

Abraham also knew that people groups would regularly exchange women who would become wives of the leaders. Diplomatic relations were maintained in that way. A prominent leader in one nation accepting a woman into his harem from another laid the foundation for peaceful relations between the two groups.

But, in light of the underlying circumstances, Abraham’s lie could have also been a veiled expression of disappointment with Sara since there were no children to prove they were husband and wife.

Pharaoh, the King of Egypt, did take Sara into his harem, but God intervened. Sara was returned to Abraham and they were all sent back to Canaan embarrassed but much wealthier. For Sara it had to be a painful experience. She was now shown to be barren publicly, on an international level.

After returning to Canaan Abraham and his nephew, Lot, had a conflict over the availability of grazing land for their herds. The situation was resolved by agreeing to separate and Abraham magnanimously allowed Lot to pick whichever area he wanted to inhabit first, taking whatever was left.

Lot eventually made his way into Sodom, which soon after was attacked by four confederate kings from the north. Four of Sodom’s sister cities were also attacked. The inhabitants were taken captive and the wealth of the cities was completely plundered.

Amazingly, Abraham with his personal militia of 318 men and two allied leaders counter attacked and retrieved all the people and stolen goods, returning them to Sodom.

After the rescue, Abraham made a point of publicly refusing any reward from Sodom, although he did give a tenth of all the goods to the local priest of God, Melchizedek.

There is an interesting set of inconsistencies in these events, which helps us understand his willingness to commit adultery. He showed great courage and faith in some ways and utter disbelief in others. He was horribly weak or incredibly strong. It doesn’t make sense.

He demonstrated great faith in traveling to Canaan but he consistently disrespects Sara. He had a hard time believing God could enable her to have children and for good reason. She had proven to be barren and her maternal mechanisms were diminishing quickly.

After acting cowardly in the face of Pharaoh, he courageously attacks and defeats an army that was easily larger than his own. Was he really a better militarist than a diplomat or was he harboring a sense of resentment toward Sara?

After placing Sara in a position of vulnerability, he was very generous to and protective of Lot. Strange that he is so forgiving, indulgent and helpful to Lot and so insensitive to Sara.

Through all of this, the one thing Abraham did well was honor God.

Since leaving Haran, Abraham had grown in wealth and prominence but his relationship with Sara was disintegrating. Still childless, he was getting exasperated and it wasn’t long till he had the chance to say so. Down deep he blamed Sara and was building a grudge against God as well.

Some time after his battle, God met with Abraham and made an interesting statement. He said . . .

“Fear not, Abram: I am your shield (protector), and your exceeding great reward (benefactor).” (Genesis 15:1)

And Abraham didn’t want to hear about it. His response shows a lot of attitude.

“O Lord GOD, what will you give me, for I continue childless, and the heir of my house is Eliezer of Damascus?…Behold, you have given me no offspring, and a member of my household will be my heir.” (Genesis 15:2-3)

The Bible doesn’t exactly say he is angry but reading between the lines you can feel the heat. Abraham wasn’t interested in protection or material wealth. He wanted children.

He also presented an interesting quandary. Was he to expect his chief servant, Eliezer, to be the anticipated heir? Was that the end of the story?

The interesting thing is, God absorbed the anger. He expected Abraham to react this way and was prepared for it. Following Abraham’s outburst God reassured him that he would, in fact, have a child of his own (out of his own loins) and provided some prophetic details about the future of his descendants.

We can learn a lesson here. Our greatest insights come during moments of frustration and anger. Our greatest vulnerability occurs during those times as well. And that brings us to Abraham’s adultery.

After this very special interchange with God, Abraham is still married to and faced with a barren and hurting wife and almost immediately following, she makes a suggestion he was in no emotional position to resist. Her idea? Take Hagar as a concubine and sire children by her.

In chapter 15 Abraham was frustrated, angry and made some outlandish suggestions. God knew he only needed reassurance and responded with patience, encouragement and insight.

In chapter 16 Sara was frustrated, angry and made an outlandish suggestion that she really didn’t want. She needed the same thing Abraham needed, reassurance and affirmation. Unfortunately, she didn’t get it.

What Sara suggested was not unusual. Having multiple wives particularly for the purpose of bearing kids was very customary in Abraham’s day. The idea ran counter to God’s original plan (one woman, one man, one lifetime) and Abraham was aware of this but after so long and so much he took the plunge.

It is actually a testament to his strength and character that he resisted this cultural trend for as long as he did.

But, what Abraham learned from this experience is that God never changes His mind or the rules. And to reinforce this point He said nothing more to Abraham for the next thirteen years.

Abraham had grown accustomed to God’s instruction in his life regularly and now there was nothing, for a very long time. The only voices were those of Sara and Hagar as they squabbled and fought over the affections of Abraham.

So, did Abraham commit adultery? Yes. Did he get away with it? Absolutely not! Can we sympathize with his dilemma? Yes.

Not only did God use a woman naturally barren, He also waited until her biological clock had stopped ticking completely before fulfilling the promise. Abraham faced a lot of problems during his life. This one was the most difficult to manage. But, the greatest source of doubt for Abraham, his barren wife, became the soil in which his faith grew the most.

Did Abraham learn his lesson? No question! If God could bring about the birth of a son by a woman who was in every way incapable of bearing children then Abraham had no problem believing God could raise that son from the dead should he be sacrificed later.

By the way, Abraham’s experience proves that adultery doesn’t have to be the death notice to a marriage. Recovery, though difficult, is possible.

It also proves that divorce is sometimes the only acceptable option. Sending Hagar away was nothing if it wasn’t divorce and it was a God-sanctioned decision. You can read about that here.

If your marriage is failing and you don’t feel loved, your problem might be more solvable than you think. In The Five Love Languages

He explains that even two good partners can easily fall out of love if they don’t learn how to love each other properly, in the right”language.” The adjustments are not difficult and the languages are universal. Many call his approach miraculous. Get the book. It’s a small price to pay to save a marriage.