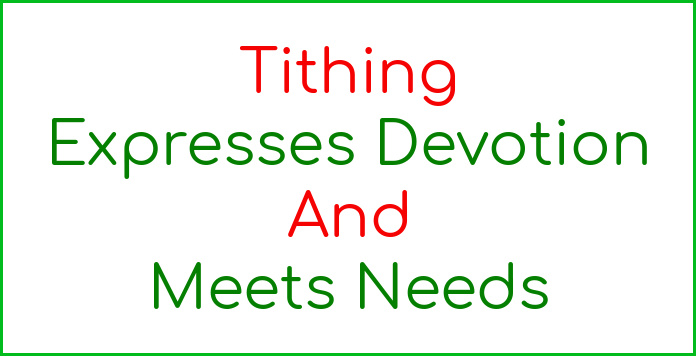 Recently on Yahoo Answers a person (we’ll call him Jerry) submitted a question about tithing:

“Does money I tithe have to be given to the church?”

The reason for the question had nothing to do with selfishness, materialism or bad financial management. His question was motivated by generosity.

The church Jerry attends was preparing to send kids to camp and there were a couple of kids who couldn’t afford to go. Diverting Jerry’s tithe to this need for three months would cover the expense and he wondered if that was legit. Would that still qualify as “tithing?”

He also made it clear that he wasn’t questioning the rationale behind tithing (devoting ten percent of your income to God). In fact, he specified that only people who believed in tithing should respond and he further qualified by requesting only “respectful” answers. I almost laughed at the request. Having been scorched a few times by anti-tithers I wanted to put on a flack jacket before reading some of the responses. He had obviously faced a few also.

And sure enough one anti-tithing respondent spewed the venom we have come to expect: calling names, restating old arguments and generally abusing those who disagree. I wont’ waste time responding.

The truth is, this is a good question. It speaks to one particular issue about tithing, “where are tithes to be offered” and it deserves a thoughtful answer.

To be clear the question here is not, should I give tithes to my church but rather must I give all my tithes only to my church. That is an important clarification. Even anti-tithing folks give money to the church they attend.

Some tithers, however, do argue that every cent of the tithe belongs to the church and they usually refer to this practice as “storehouse tithing.” The argument is based mostly on one passage, Malachi 3:10 which literally says…

“Bring all the tithe into the storehouse…”

Both ideas can be debated.

Concerning tithing, Christ’s death did render ceremonial law nonessential but principles of truth and spiritual practices embedded in the law – and established before the law – are still relevant today. Churches still teach the truth, make judgments among believers and evangelize the world – all things done in the Old Testament – and should be funded in the same way, tithing.

And Malachi’s storehouse was more than just the Temple. Every third year the tithe was to be stored in local communities to be accessed as needed by the poor (Deuteronomy 14:28).

So my answer to Jerry’s question:

We do that in our church and have provided financial assistance, with no strings attached, for people in and out of the church. Obviously subsidizing camp expenses for kids could be covered out of this fund. Do keep in mind that a suggestion like this may take time for implementation. You might even have to motivate it with sound explanations from a biblical perspective.

In the Old Testament a third of the tithe was given to the needy so there is precedent for the practice. That constitutes biblical justification for keeping a portion of your tithe aside, no more than a third, which could be used for charitable purposes.

In the Jewish communities they still practice this today.

Keeping some of the tithe to one side requires more bookkeeping but that develops skills that are useful.

That might be better than giving money away. The kids will learn from the experience and probably get more out of camp. It is better to help them with “life issues” than just give them money.

You can, of course, give your tithe directly to individuals but in that case the money can’t be claimed against your tax return. Tax deductible donations must be channeled through registered organizations such as churches or other nonprofits. So, if Jerry’s church is not agreeable to his plan or he can’t find another charity that is, he will have to weigh his decision against the loss of a tax deduction.

As a side note, this doesn’t apply in every country. Some countries exempt offerings and some don’t. For example, a few that allow exemptions are: USA, Canada, UK and New Zealand and a couple that don’t are Australia and South Africa. Of those that do allow exemptions, the tax code is structured differently from one to the next.

The bottom line is this. “Storehouse Tithing” – Giving all your tithe only to your church – does not represent an absolute. It isn’t like adultery. It is more an operational principle than a moral restriction. God is concerned about the poor and needy so allocating a portion of your tithe for such causes is very acceptable.

But, it is fair to say that a portion of your tithe should be given to your church. If you benefit from your church and the church maintains biblical ministries it is only reasonable to support it financially. Membership is synonymous with partnership and tithing is one way to express solidarity.

Obviously, if you are not happy with your church, you should find another one.

See how to Calculate The Tithe Properly

, Douglas Leblanc provides much more than a narrow discussion on a traditional issue. It isn’t the same old arguments presented the same boringly technical way.

Instead, and probably because he admits to being “no theologian or exegetical writer,” Douglas has found an intriguing way to cut to the real heart of the issue. He shares the experiences of eleven different couples and one lone Monsignor, all of whom endorse tithing for a very similar reason: selflessness.