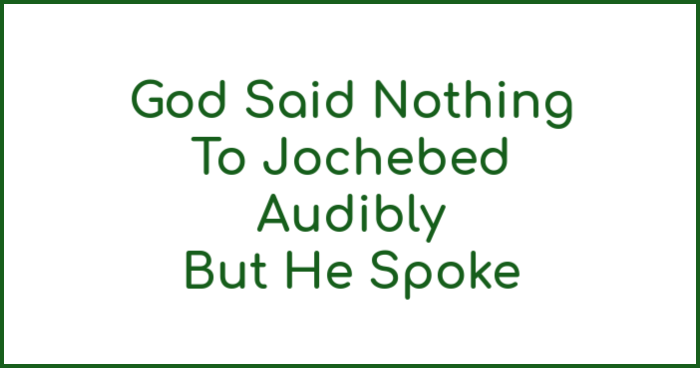 God Uses The Mundane
To Produce The Miraculous

Mention the name “Jochebed” and most people give you a blank look. But refer to Moses’ Mother and the light comes on.

Everyone knows the story of Moses. He features prominently in Exodus through Deuteronomy and, in fact, wrote all four books. There is little question that he edited the Book of Genesis also – with God’s guidance, of course.

There is also little question that Jochebed should get a lot of credit for everything Moses did.

Of the many unusual things about the life of Moses, the one that is rarely mentioned is the fact that the Bible covers his complete bio from birth to death. Very few have that distinction: Samson, Samuel, John the Baptist and Jesus to name a few. It is also interesting that the lives of these people are accompanied by miracles, at least at birth.

Unlike the others, however, Moses’ conception wasn’t miraculous. His survival immediately following birth was.

Pharaoh, the reigning monarch when Moses was born, decreed that all male born Israelites be sacrificed to the Nile. Not only did Moses survive that decree he was also protected in the safest possible place, the palace of Pharaoh.

It was a miracle, yes, but not in the normal sense of the word. This miracle required a large dose of human activity by someone with a lot of courage, tenacity and ingenuity.

Enter Jochebed, a little known figure otherwise, but one that will forever be associated with the miraculous survival of Moses. The question is, did God speak to this woman and if so, how?

There is no indication that God said anything to Jochebed audibly throughout this whole experience but she acted with conviction, as if she knew exactly what God wanted. How did she come by this knowledge? Well, I would suggest that God used many things to speak to her situation:

He Spoke Through Natural Instincts.

No mother willingly offers her child to be destroyed without a fight. Even though the government required it, and probably many fellow countrymen were allowing it, she couldn’t bring herself to throw her child into the Nile. Her natural instincts were God’s voice motivating her to take action.

He Spoke Through Common Sense

Common sense made it clear that she could effectively hide Moses in the house for only a short period of time. It must have been frightening to contemplate any other plan but fortunately, her emotional voice didn’t drown out the voice of common wisdom. Instead of waiting for the inevitable she formulated a plan. God spoke through common sense.

He Spoke Through Practical Skill And Experience

We aren’t told where or how she learned to build a basket out of reeds but it was obviously a skill she knew.

We aren’t told how she learned to make it water tight with tar but the river did feature largely in the culture so it isn’t strange that this skill was also understood.

The important thing is she drew from her experience and used the skills she had to accomplish the desired end. She did what she was able to do and didn’t chance going beyond her practical abilities. Very much like David using a sling instead of Saul’s armor. God spoke through the voice of practical skill and experience.

He spoke through sentimentalities

Everyone tends to be protective where young children are concerned but ladies tend to be particularly responsive to the needs of infants – “brooding” – and Jochebed, being a lady, understood this.

As she formulated her plan I am sure God nudged her gently to make good use of these sentimental tendencies. The strategy wouldn’t have been as likely to succeed if it was Pharaoh’s son or Pharaoh.

He spoke through superstitions

The Egyptians deified the Nile. It was like a god to them. Jochebed wouldn’t intentionally insult this superstition and she wasn’t fooled by it but she wasn’t afraid to use it to good advantage.

Finding Moses floating in the Nile would be seen as a good omen by any Egyptian, especially the daughter of Pharaoh. That, coupled with a woman’s natural brooding tendencies, would have put Moses in a very special light. And sure enough, he was afforded nothing but the best treatment even though a Hebrew. God’s voice encouraged her to make good use of these superstitions.

He spoke through existing revelation

God had previously spoken to Abraham and made predictions and promises about his descendants. Those promises are:

Jochebed was familiar with these promises and, though spoken several hundred years before they still reverberated in her heart. She also knew the timeline. Her generation was close to the point of deliverance and there was no reason to believe God wouldn’t begin raising up a leader to facilitate these promises during her life.

He spoke through logic

It would be fanciful to suggest Jochebed knew Moses was God’s chosen leader for Israel as soon as he was born. She loved her son like any mother would love a son and began doing what any mother would do to save him one step at a time.

But, as things developed she began putting two and two together. The extraordinary way in which things were happening suggested God was interested in more than just the survival of one Hebrew infant. She began visualizing the salvation of an entire nation.

An audible voice wasn’t needed to suggest it. The facts were obvious.

Reading between the lines, following is what I think actually happened:

Did God speak to Jochebed? Absolutely but He did so using very mundane devices. She never heard audibly from God but she had no problem knowing what He wanted. Using the little information she had along with basic human nature and experience she was able to follow God’s leadership through some very dangerous situations.

The question is not, did she hear God, but rather did she have the courage to follow through.

God still speaks this way. Using the Bible as basic principles to live by and circumstance as your daily guideposts you too can know the voice of God.