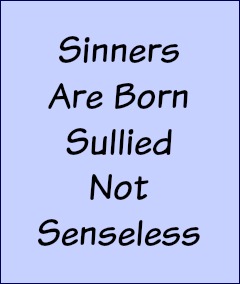 The Devil Thinks Calvinism
Is A Great Idea!

And why not? One of his tricks is to make people think they can’t get saved, so anything that encourages doubt works right into his hands.

But, even though he thinks Calvinism is a good idea he doesn’t believe it.

In case you’re not familiar with the tenets of Calvinism it is a philosophical concept – nothing theological about it, although some would argue otherwise – that says God selected certain people to be saved and consigned everyone else to hell. His choices were made in eternity past and are fixed. No appeals allowed.

Yes, if you are a thinking person the logical inference is any individual not chosen for salvation IS chosen for hell. Offensive thought, hey? Calvinists think so too and have responded with long drawn out discussions designed to camouflage the reality. They even came up with a term for it, “double election.”

Google it and read for yourself. One post admits to the offense and suggests ways to soften it, without admitting any error, of course. I won’t take time to explore it here.

But, getting back to my original thought, the Devil doesn’t buy it. Not only does he focus on EVERY person – not just the elect or non-elect – he also works to blind them all to the truth of the Gospel – a condition Calvinists suggest is already existing and is curable only by a special, mystical, enabling by God.

Instead, however, the Bible says the following:

But IF (emphasis mine) our gospel is hidden, it is hidden to them that are lost, in whom the god of this world (the Devil) has blinded the minds of them which believe not… (2 Cor. 4:3-4)

The word “IF” strongly suggests that blindness is a manufactured state. It is the result of conditioning over time. You aren’t born that way, you become that way. It is not universal. It is a developed condition, which means we are born sinners not senseless.

Additionally, a sin nature alone is not enough to blind us. The Devil wouldn’t work to blind us if the condition already existed. In fact, the above verse describes the Devil’s actions and if actions, rather than words, determine what a person really believes then based on this verse:

Obviously, if he believed certain people were irresistibly and unconditionally chosen to be saved he wouldn’t work so hard to interfere, as this verse implies. He may be deluded but he isn’t stupid. Why try blocking what cannot be altered.

When Felix trembled (Acts 24:25) and Agrippa was almost persuaded (Acts 26:28) and countless others were moved by the truth of the Gospel the Devil reacted. He didn’t assume these people were pre-chosen for hell and, worriedly, he got in the way, doing anything he could to prevent anyone hearing the Gospel in the first place and interfering with their believing it in the second.

Yes, people are blinded to the Gospel but their blindness is not due to their sinful condition. The Bible plainly says,

Not only does the Bible say the Devil causes this blindness but there is also a lot of evidence to prove this blindness is not permanent. Felix trembled, Agrippa was almost persuaded and Paul – and others – were stoned, beaten, run out of town and executed by those who heard the Gospel, not because they couldn’t understand but because they did.

Satan can prevent people from seeing the Gospel he can’t prevent them from believing it.

These are controversial ideas, yes, but please understand that “controversy” is not intended. If you believe Calvinism is true, fine but you have many questions to answer…

And these are just a few questions that come to mind.

Maybe this is one issue about which we should agree with the Devil.