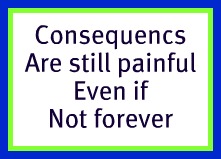 I asked a friend if he had read the book. I didn’t ask what he thought about the book but only if he’d read it.

I figured if he’d read the book he could then mention some particular arguments Rob makes in the book, which he thought were interesting, and we could talk about them. I was asking for details, observations or interesting tidbits to look out for when I got around to reading the book myself.

However, that wasn’t to be.

His immediate response was:

“Rob opens the door to universalism.”

Talking about it wasn’t allowed. Reading the book was akin to having tea with the Devil and discussion was outright blasphemy.

He never said he had or hadn’t read the book, or that he liked it or didn’t like it. His statement was a warning not to read it as if doing so would put me within the contagion range of a deadly disease. It was clearly a never-to-be-brought-up-again topic.

His remark also carried a sense of superiority. It was as if he was saying…

I can read the book and not be affected but most can’t.

That is, if he had bothered to read it at all.

Just to be clear, although universalism is a four-letter-word in conservative theology today, it has been entertained by Bible believing Christians throughout history.

Some Christian churches still teach a form of it and most non-Christian religions teach a version of it too. Ignoring it isn’t smart. The best way to answer it is to engage it and that is what I was hoping to do.

But to get on with the conversation, universalism has two extremes:

At one end you find Universalism is very existential. The only important truth or consequence is the one you perceive and it doesn’t matter anyway.

At the other end of the spectrum, truth is absolute and the eventual outcome, heaven or hell, is determined by personal choice but the opportunity to choose never ends. This version does not require the disavowal of any commonly accepted fundamental truth. Hell is still hell, sin is still sin and every person is still responsible. This is what Rob seems to teach.

What that means is, these two extremes are very different and shouldn’t be lumped together. There is a lot of character in the one and none in the other and there are many variations in between.

My friend’s use of the term universalism was very much in keeping with the party line. Any ideas associated with universalism are relegated to the wasteland of no discussion allowed. Forget about “going there,” just talking about making the trip is unforgivable.

Well, Rob went there, and once he got there, he dug up a few ideological artifacts, dusted them off and passed them around. He brought them right into the center of fundamentalism’s holy city, held them up in public and said, “hey, look what I found.”

But, in spite of this, he changed very little and in chapter 8, the shortest chapter in the book, Rob leaves us with three simple and universally accepted truths about salvation.

Rob sings the song we are all familiar with: Salvation offered by God’s grace, motivated by His love and accepted by a trust so simple a child is capable of it.

Rob begins this chapter with the story of his own salvation and his experience honors all the basics. Confession of sin, recognition of Jesus, humble request for forgiveness and all of it an expression of personal trust in God’s promises.

That prayer was a defining moment in my life. p. 194

He goes on to say that in spite of the cynicism and skepticism that would cause some to question the efficacy – or need – of such a simple expression of faith, that is exactly what is, in his words, “to be embraced.” (p. 195)

That is what we all believe.

Rob also makes the point that the moment of Salvation starts a journey during which we continue to be shaped and molded by God’s love:

Jesus invites us to become, to be drawn into this love as it shapes us and forms us and takes over every square inch of our lives. pp. 195-196

That is a part of the story that many diminish or leave out entirely. Instead of “becoming” we act more like lumps going nowhere, doing little. Rob emphasizes the character building potential that salvation brings and the actions that reflect those changes.

This is widely believed but often given nothing more than lip service.

Yes, Rob does suggest a person’s stay in hell may not be final but he isn’t glib or casual about it. He urges every person to take full advantage of whatever opportunities they have to embrace God’s love when they are presented. And he warns:

While we may get other opportunities (to get saved), we won’t get the one right in front of us again. p. 197

He clearly says there is judgment and consequence attached to these spurned opportunities. There may be options to right bad choices later but who knows where the journey will take you before your course can be righted. According to Rob…

Time does not repeat itself. Neither does life. While we continually find grace waiting to pick us up off the ground after we have fallen, there are realities to our choices. p. 197

Before making that statement Rob points out five instances of God’s judgments (pp. 196-197) all of which emphasize the fact that consequences are still painful even if they aren’t forever. Avoiding hell in the first place is still the wisest option.

He made the same point earlier in the book saying that hell is “a pointed, urgent warning,” (p. 82) so he is not taking the topic lightly or suggesting anyone should.

But, whatever your choice, God loves you and will never stop loving you. So, maybe in the end, as Rob puts it, love will win.