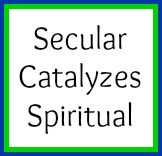 Want To Be More Spiritual?
Be Temporal More Deliberately!

The two natures of a human being, “spiritual” and “secular,” are like two sides of a coin. Remove one side and the coin no longer exists. It’s actually impossible to remove a side from a coin but even if you deface a side it is still a side.

Just like the two sides of a coin, spiritual and secular cannot be separated.

To be clear on the meanings, “secular” is usually thought of as “worldly” or the opposite of religious and connotes something negative especially when characterizing people. It’s the wayward that are worldly. It’s a “four letter word” in religious terms but that meaning doesn’t represent the word accurately.

According to Merriam-Webster “Secular” also means “temporal” as opposed to eternal, which is the way the word was understood a few hundred years back when it was first used. That, of course, means that “secular” is different to “spiritual” but not in a bad way. The two are not disconnected.

Secular speaks of normal human pursuits in this temporal life, some of which effect eternal matters in the next.

The negative connotation, and the emphasis placed on it by Christians, has the undesirable effect of pushing the non-religious even further away from spiritual issues. It grates to be referred to as “worldly,” in the pagan sense of the word, just because they don’t attend church or quote verses from the Bible, especially if they happen to be upstanding people, in some cases more so than those in church.

All of that speaks to the secular side of the coin. Now for the spiritual side.

“Spirit” refers to the non-physical side of a person and since you can’t see a spirit or touch one physically many people think of it as imperceptible. They describe it mystically and manage it in an other-worldly way.

But here’s the truth. Spirit IS intangible but it ISN’T incomprehensible. Yes, it is evidenced by abstract thought which isn’t easy to explain but it can be explained. Abstract thought is:

The ability to conceive of and analyze ideas that have no spatial representation.

“Value” is an abstract concept. “Marriage” for example – a value in many cultures – is abstract but a wedding or a home or a family is not.

All of that is to say that these two concepts are tied together. Putting too much weight on one will proportionately reduce weight in other, an imbalance. Get one out of balance either way and the other will be proportionately out of balance in the other direction. No person is mostly spiritual or mostly secular. They are naturally both, so attempting to neglect one to enlarge the other is most unnatural.

Every person should be as reliable and capable in secular pursuits as they are in spiritual and Christians should model this best.

The idea that these two natures represent separate independent options, instead of complementary counterparts, isn’t new. It shows up on the historical radar in the 6th century BC when the first Buddha, Siddharta Gautama, promoted self denial – secular interests – as a means of spiritual improvement. Doing this successfully, he claimed, enables one to purge all faults and reach a state of enlightenment, aka, nirvana. He wasn’t the only one to promote the idea or the first but with 350 million Buddhists worldwide you could say he popularized it.

The most logical extension of this thinking is the ultimate expression of self denial, extricating oneself from normal living routines and concerns or in a word “Monasticism.” What better way to transcend this world than to have nothing to do with it.

That has become popular but is it really the answer.

Unfortunately, neither the Old nor New Testaments support the idea. In fact, both warn against it. The Old Testament specifically prohibits trying to connect with departed spirits, which isn’t exactly the same thing but it isn’t too far removed either. There isn’t much difference between trying to conjure up a spirit and trying to elevate oneself to the realm of the spirit. If you manage to rise to that level – if such a thing could really be done – you might find yourself faced with those who are permanently there. More frightening than enlightening.

The fact that no details are given on the practices associated with trying to separate the two may mean that it really can’t be done. It’s bogus, a waste of time, a distraction not to be entertained. If Nirvana isn’t really achievable, if we can’t really become absorbed spiritually to the exclusion of the secular, what are we missing out on by trying to get there?

Spiritual practices, because they are associated with redemption and are understandably thought of as better, not only receive far more attention – overemphasized – but have also become the escape route from secular realities. The thinking is, if one becomes more spiritual, they can be less responsible in the secular sense of the word and still become quite healthy, wealthy and wise. Religious people wouldn’t admit to that statement but they endorse it in practice every time they claim Jesus alone made them successful.

If David were here today he would disagree. He was the one who lamented:

In spite of being responsible both spiritually and in secular matters David was hurting while the less spiritual were advancing. It didn’t seem right. 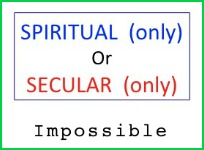 While some believers may tolerate the super spiritual thinking, unbelievers see it as nonsense. The Bible, of course, doesn’t support the idea but religious people don’t say much to deny it, so what choice do atheistic/agnostic types have but to balk when religious folks claim success on spiritual grounds alone. Many people succeed without religion and many religious people don’t succeed so they respond to the harping by trying to eliminate religion completely.

Unfortunately for them, that isn’t any more possible than trying to opt only for the spiritual.

The Bible is Secular

Religious people may not talk about it much but the Bible actually has a lot to say about everyday, normal, mundane, secular issues. I’ve listed several below.

And more. Parents mold children without frustrating them (Ephesians 6:4), 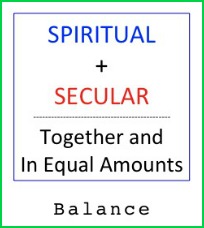 employees render reliable service to their employers (Colossians 3:22), orphans and widows should be assisted (James 1:27) and you must love our neighbor as yourself (Mark 12:31). All of these are commands, have a spiritual impact and very much a part of daily life in this world.

Even in the beginning, before parenting, employers and neighbors were common concepts, God told Adam and Eve to keep the garden. Some say that is spiritual, but spiritual or not, it is definitely ordinary. Maybe to be spiritual we must do something physical.

Heaven is for Real

is a bio of a “near death” experience (NDE) but without all the “weird” and “sketchy” images that usually accompany such stories.

Colton’s report is as accurate as any retelling of an event can be. And since heaven is not only real but very close we shouldn’t be surprised when it bleeds through occasionally.

The story is different in that it doesn’t focus on “long tunnels with lights at the end” or the sensation of watching medical personnel feverishly operate from a hovering out-of-body perspective. It is a matter of fact story shared from the perspective of an almost four-year-old child who had no preconceived ideas beforehand and explains everything casually. To him it wasn’t strange.