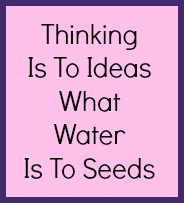 As the story goes Sir Isaac Newton sat in his mother’s garden and observed an apple fall from one of her trees.

Legend says the apple fell on his head. We can’t verify that with certainty but there is good reason to think it might be true.

Apples had fallen from his mother’s tree many times before so this wasn’t new but on this occasion the apple really caught his attention and it stimulated a life long pursuit.

In light of his response, a hit on the head seems likely.

Newton was puzzled. The experience provoked many questions and being the curious person he was, he did what all inquisitive people tend to do.

He immediately pulled out his MacBook Pro, connected to the internet and Googled the question:

What makes apples fall from trees? What does it mean when they do?

When he didn’t find an answer there he searched Amazon for books that could explain the phenomenon.

And when he couldn’t find an answer there he decided to figure it out himself.

Obviously, none of that happened except the last part – he figured it out himself. There was no MacBook, internet or Google so they didn’t enter the picture.

He was curious, though, so he made use of what he had. The computer in his head.

Others had considered some of the same ideas but he was familiar enough with the research to know he would have to answer the questions himself if he wanted to take the research further. Even if he could Google his queries there were no answers to find.

But the big point is this. He didn’t wait – like so many of us – assuming the answer would come only from someone smarter than he.

Newton wasn’t crippled with the idea that someone else could understand things better. He wasn’t afraid to think or to share his findings. The public’s inability to absorb new ideas didn’t get in the way of his thinking.

It’s a good thing, too, because through his research he developed the foundational ideas – gravity, physics, calculus – that enabled modern science to catapult men to the moon and bring them back safely several times.

The question, however, is not “How did he find his answers?” That’s obvious. He thought about the issues deeply, making observations and calculations, and experimenting with his ideas until he found the evidence to prove the theories.

The real question is what enabled him to overcome the fears associated with thinking up new ideas and stating them publicly? We all have ideas we don’t always share them publicly or pursue them energetically. Why? Fear! There are several that stifle the free flow of ideas. Consider the following:

Fear of Being Wrong

Which is closely associated with the fear of being ridiculed. Thinkers like Newton venture into unmapped territory and try to chart the way. It is very easy to get the new map wrong and it is inevitable that snipers will look closely for flaws and megaphone them once found.

Remember that being wrong conceptually is like failing in any other way. It’s a stepping stone in the pursuit of truth. Don’t let it stop you from thinking. Newton may have been afraid but he overcame his fears and published his findings.

Newton didn’t just locate the errors in previous thinking and offer corrective theories only in writing. He built physical models to try his theories in the lab and even more models to demonstrate his findings to peers.

Fear of Offending Others

Newton and Descartes didn’t agree on the specifics of gravity and that isn’t unusual. Disagreements happen a lot between reputable scientists and thinkers, and disagreements, along with resultant offenses, are to be expected.

“Cutting Edge” research attracts many theories and it’s no surprise that the proponents of these theories hold them dearly. They invest a lot of time, effort and resources in trying to prove these pet ideas and their credibility rides on it so they don’t take kindly to people proving them wrong.

And even among scientist – the ones we consider most reasonable – rationale gets lost in hot tempered debate.

No one enjoys being proven wrong, which essentially must happen if one theory is proven correct. You stand a chance of offending others but don’t stop thinking. You may be right.

Even when the whole community accepts one theory as right there is a lot of competition to find the proof and a lot of friction over who found it first and proved it best. Newton experienced this with calculus (Gottfried Leibniz) and gravity (Robert Hooke). There were others who claimed to have reached the finish line first but Newton won the race, mostly.

Competition is wholesome so don’t let it, or the associated aggro, frighten you away from you thoughts.

It’s sad but Gottfried Leibniz used religion as a tool to discredit Newton. These two men argued over who was the first to discover calculus and Newton was winning the battle for recognition. In an effort to gain ascendancy Gottfried used Newton’s insatiable appetite to investigate every thing, even traditional theology, against him – implying he was heretic.

It was a frightening situation since heresy was a serious accusation in those days but it didn’t work. Newton defended himself acceptably and forged ahead, although I’m sure he learned to tread carefully.

It can be dangerous but thinking is what we were made to do and Newton epitomizes this truth as well as anyone. Don’t be afraid. Water your ideas with thought.