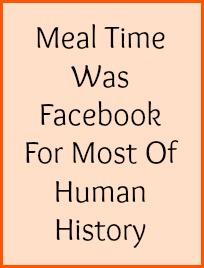 The Lord’s Supper
Nourishes Relationships Too

The Lord’s Supper is usually mentioned and often observed during the Easter season and there is good reason for that. It acknowledges elements of the resurrection story, the shed blood and broken body of Jesus. It makes sense.

The observance is patterned after the Last supper Jesus enjoyed before His arrest and trial. You could say it was His last moment of sanity before everything fell apart. His last quiet time before the storm.

Our church always observes the Lord’s Supper during Easter but not the stripped down version. We try to create a meal-like atmosphere. Not a full blown meal but as close as we can get during a service.

It was during a meal that Jesus instituted the symbolism of wine-to-blood and bread-to-body so there is nothing in a meal that diminishes that truth. In fact, the history of meal-time adds richness to the idea.

Unfortunately, the sense of “meal” is no longer the foundation for this memorial and the names we give it don’t help much either – communion, holy communion, Eucharist, sacrament, ordinance. In keeping with the overly religious names we give it, the observance has become more like a ceremony than a meal. And, as with all ceremonies of the religious type it is more restrictive than affirming.

It isn’t uncommon for humans to turn meal time joy into an exhibition of decorum but religion has taken that trend a step further. Participants must be members of the church and morally upright. The observance is so heavily draped in restriction that celebration is only a shadow if it is there at all.

For some the meal is a confessional. For others it is a type of mystical cleansing but there are at least three good reasons to rethink our approach.

The Last Supper Was A Supper Not A Ceremony

When you leave out the meal, communion becomes nothing more than “ceremony” and ceremony, while not bad, can be deadening. In this case especially so:

You get the impression one must qualify to commemorate these important truths when, in fact, the symbolism points to what Jesus did because we couldn’t qualify.

Taking “meal” out of the Lord’s Supper turns the observance into “fast food” and changes the spirit of the story. Let’s not do that.

The Bible doesn’t specifically say “Meals make us more spiritual” but judging by the part meals have played in conveying and emphasizing truth you would have to rank them very high on the spiritual “to do” list. Generally speaking:

And there were many significant truths conveyed or celebrated through meals:

We don’t see it so much today. Animals are processed (sacrificed) out of sight at the abattoir and we buy pieces conveniently prepackaged at the shops. For us, the imagery is lost. But for the people in antiquity it was vivid.

From an Old Testament perspective you really can’t separate “meal-time” from “God-time.”

Eating Together Was Facebook For Most Of Human History

Food wasn’t so easy to come by in antiquity so sharing food was referred to as a Covenant of Salt. Eating together was like sending someone a friend invite but in the case of the Old Testament it promised more than friendship. It was an act of generosity, but more than that, it was a contract of loyalty.

Sharing a meal together was a way to say “I have your back.”

That’s why Judas is known as the worst kind of traitor. He ate the meal of friendship with Jesus and then betrayed Him. Today, food is inexpensive and plentiful, so sharing it by comparison, is cheap. But that is a reason to include it in the Lord’s Supper, not exclude it.

There is a personal observation here too.

We all know that families are paying a high price because meal times are interfered with by all kinds of distractions. We don’t eat together. We watch TV together while we eat. The TV does the talking and thinking for us. Relationships and the skills needed to develop them are dwarfed.

Parents don’t attend to kids, kids don’t mind parents and neither knows how to talk to the other. Meal time is the bridge for that gap. Even just one or two undistracted meals a week could make a difference.

We go to church, park in the same spot, sit in the same pew, follow the same dress code, model the same Bible-carrying-offering-giving image, nod affirmation at the same ideas spoken by the same person and repeat the same catch phrases meeting after meeting and through that never get to know our fellow parishioners.

Which means when there is a problem, we are too relationally stunted to care intelligently. We care but we don’t know people well enough to know how to show it.

Historically, meal time was the school for developing particular relationships and the added benefit was developing skills associated with managing relationships. Nothing has changed. People learn how to relate by relating and there is no better time to do that than around a meal, especially one the Lord instituted.

Yes, it takes more time and effort to organize a meal and busy schedules along with personal outside interests get in the way but organizational substance is based on relationship. Every church needs that, so we should make it happen. Incorporate a meal-like atmosphere for your next Lord’s Supper.