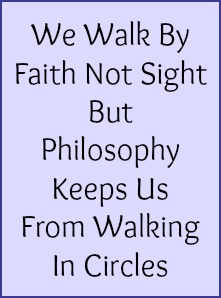 Dogma Tells Us
What To Do
Philosophy Tells Us Why

I frequently take a philosophical approach to the Bible. I wasn’t taught to do this, it just came naturally, but it isn’t thought of as the right approach so some take offense.

I’ve been called both liberal and unbelieving but there are many reasons why philosophy can be very useful in Bible interpretation. I’ve listed several below.

And I’m philosophical about it.

After a philosophical discussion of sorts, one person told me, “you’ve changed,” as if change is the hallmark of heresy but I’m not sure that’s a valid accusation. Even religion has a long history of change.

There was a time when church folks didn’t have music in church because their “belief” system didn’t allow it. It was only after long heated discussions that a quiet hymn was allowed to be sung at the close of a service. Since then, many more musical changes have followed, as you may have noticed.

The point, of course, is that little change was arrived at philosophically because there is no direct statement in the Bible to solve the argument. No “Thou shalt have or not have music in church” could be found. The eventual answer was arrived at using logical arguments – the philosophical method.

And there is good reason to continue honing our philosophical skills. Change is the norm. It is to be expected. It is so universal Bob Dylan wrote a famous song about it.

The truth is only a perfect understanding or perfect perspective doesn’t need to change and God is the only one who can claim those qualities.

Change is the one thing humans can do, which God can’t. Let that sink in. We have an ability that God doesn’t have. God never changes because He cannot change and we change because we can’t do otherwise.

Change Must Be Intentional And Intelligent Or In Other Words Philosophical

What makes humans different from the rest of creation is we can take change by the horns and give it direction. It will happen with or without our involvement but our action or inaction influences the outcome. Philosophically we refer to that as self determinism.

What that means is, philosophically speaking, within reason humans CAN happen to circumstance.

But enough of that. For the record, my basic beliefs are still in tact. Jesus is still the Savior and the Bible is still true. Neither change nor philosophy is synonymous with heresy.

So back to philosophy. I’m not sure you can fully understand the Bible or any particular truth without venturing into the philosophical realm. Let me explain why.

The Bible is not a book of conclusions. It is a very thorough framework of clues (some will take issue with that description) and it provides a lot of evidence to guide in the formulation of theories but clues and evidence are not absolute. Answers they are not.

As Christians we act on what we believe not on what we can prove. We walk by faith not by sight.

By the way, “Theory” is another bad word but until you can prove God absolutely, like in a lab, there is a theoretical side to your belief. That’s why we call it faith.

But don’t overreact. I believe in God completely and readily admit that the evidence for His existence is overwhelming. What every believer must admit, however, is all that evidence lumped together and presented in an organized logical format is still circumstantial. It can’t be ignored but it doesn’t constitute absolute proof and if that bothers you, then you just aren’t thinking properly.

I believe every word of the Bible is inspired, yes, and it does give us answers to some questions – not all – but it isn’t a catalog of conclusions. Even the very few conclusions you do find can be further expanded philosophically.

Let me throw in a bit more insight about philosophy.

Philosophy Isn’t Offensive Even When Philosophers Are

Philosophy is not well spoken of in religious circles. It isn’t discussed as a concept or taught as a method of interpretation. “Apologetics,” which is nothing more than philosophy in action, is as close as we get to the idea.

The word “philosophy” is treated more like an expletive than an academic pursuit but it infuses the discussion in every commentary. Every step you take in interpreting Scripture involves the tools of philosophy.

Every time you ask why, what, how in regard to the Bible text you are engaging belief on a philosophical level.

The reason philosophy gets a bad name is many recognized philosophers, who speak-teach-write only in philosophical terms, will often say things contrary to the Bible. They don’t believe in God or don’t believe one can be sure about God or have taken a decidedly opposing position to the Bible. Everything they say stems from that base and argues to prove their premise.

Their approach is philosophical, which isn’t offensive or immoral, but their conclusions offend. Philosophy, however, isn’t the problem. Their starting point, the premise is. They come to different conclusions because they begin with a different idea – there is no God – so everything they say insults and philosophy gets tagged as a thing of the devil.

Philosophy Is More Convincing Than Dogma

We can’t really draw conclusions based only on a verse or two (the dogmatic approach) and expect to be clear and convincing.

Explanation: Dogma is a summary statement of truth usually expressed in the form of Do’s and Don’ts (do go to church – don’t lie), or as an absolute truth (God is love). Philosophy explains why lying is wrong in most cases, how it hurts and when it is acceptable (remember Rahab). Dogma simply repeats what God says (Thou shalt not kill). Philosophy tries to figure out the difference between one type of killing (murder) and another (self defense).

Philosophy is a method or approach to thinking. It helps one expand and apply ideas. It adds richness to the beliefs we embrace. A bare faced statement of truth, e.g., a verse of Scripture, can be made more clear and relevant when exercised philosophically.

People are by nature philosophical. When they fail to exercise this natural tendency it is usually because someone browbeat them with dogma. Don’t misunderstand. Dogma isn’t bad because it dogma but it is easier to comply with dogma when you understand why. Getting to the “why” is philosophical.

In fact, many of our conclusions about some verse of Scripture are heavily influenced by the philosophies instilled by experience and culture. We are, to some degree, the philosophical products of our upbringing.

There is a reason Republicans breed Republicans and Democrats, Democrats. Like it or not we are all philosophical at the core and much of our philosophy was imposed on us.

All I’m trying to do – and you should too – is be cerebral about my philosophical core. Why not focus on it, think about it, analyze it and call it what it is. It’s there anyway we might as well engage it.

Let me explain how it works in a Bible situation. You have to start with a particular issue. Philosophy works best when it is focused rather than aimless.

I’ve had many discussions with people about eternal security and the conversations often migrate to “what-if” questions, the philosophical nuggets that get thrown in after all the verses have been dissected without reaching a resolution.

That’s what usually happens. Verses are batted back and forth, each one supposedly representing the final nail in the coffin of the opposing idea, with neither side accepting the others conclusions in the end.

Once all relevant verses are exhausted, the philosophizing starts. “What if this” or “What if that” or “How about this other thing?” That’s where the discussion really begins.

The Bible Tacitly Commands Us To Be Philosophical

Two Scriptures are relevant to this discussion. Paul said:

I am set for the defense of the Gospel. Philippians 1:17

And Jude said all of us are:

To contend for the faith. Jude 1:3

“Defend” and “contend” sound perilously close to fighting words and that’s often how they are read. But should swords and rifles characterize believers? Are we to shoot Bible burners and run through blasphemers with swords? Is this really a call to military arms? Are we to quote Bible verses as if throwing stones at the enemy?

Or were Paul and Jude echoing the instructions God gave Joshua in the Old Testament?

Meditation is the kind of thinking that penetrates. We call it meditation because it is done without distraction but it is still philosophical. There’s nothing mindless about meditation.

The best way to make an appeal for the truth is to make an argument and you can’t do that without getting a bit philosophical.