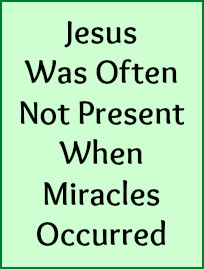 Would A Visible Jesus
Be Easier To Believe?

I know some of the places Jesus traveled and the roads He walked on but I’ve never walked those roads with Him.

I know He traveled by foot and the roads were dusty, but I’ve never observed Him washing the feet of others.

I know Jesus ate fish, honeycomb, figs, olives, bread and lamb, among other things, but I’ve never shared a meal with Him. I’ve never observed Him while He ate.

I know what Jesus taught and what He said in prayer but I’ve never heard the sound of His voice.

I know He had face to face conversations with individuals but I’ve never had the benefit of reading the approval, the concern or the frustration in His eyes.

I have no visuals of Jesus. I don’t know the shape of His beard or the length of His hair. I can only guess at how tall He was or how much He might have weighed.

I’m guessing He wasn’t overweight but I have no visual to prove that.

A limited number have claimed to have seen and conversed with Jesus on earth following His ascension. Some claim His healing powers are just as active today as they ever were.

I know it may seem negative to say it but I’m skeptical about those claims. Before you criticize me too sharply I would qualify my skepticism by saying I’m not cynical.

I have no doubt that Jesus could do all the things I’ve mentioned – walk with us, talk with us, eat with us – and I don’t blame people for wanting that to happen.

I just can’t figure out why He would do these things so sparingly now, when He was so generous with His presence or powers in the first century.

I also think His physical appearance may not be as much of a boon for Gospel as many think.

It would be easier to believe if Jesus would just show Himself to us! If He walked with us and talked with us, belief would be automatic! How could we deny Him in the face of His physical presence?

But there are several reasons I’m skeptical about that too.

A Physically Present Jesus Is Difficult To Verify

If someone mysteriously appeared – let’s face it, His appearing would require a very miraculous event – and claimed to be Jesus, how would you verify that? A driver’s license? A passport? Would you need a letter of reference?

Even if this mysterious person was a male, and had scars in his hands and feet, how could you be certain? There is no guarantee.

You might argue that Jesus, being God, could make it clear that He is who He says He is. I would argue that He did that in the first century and people still doubted, even His disciples. Why would things be different now?

Miraculous Touch Is Difficult To Prove

And what about miracles? If a miraculous healing happened before your eyes, how could you prove Jesus was or was not responsible?

Would miracles be any easier to prove if He was physically present? Are people wanting or needing His physical presence to help them believe? Does God really need close physical proximity to heal?

Jesus didn’t use physical presence as proof. He was often not present or physically involved when healing occurred in the New Testament.

And further. How can you be certain He doesn’t help even when we use medicine? Must it be absolutely either/or? Must we rely only on good medicine or only on Jesus?

Is it unthinkable to believe an unseen Jesus would use a combination of medicinal power and natural power, as well as spiritual power to heal?

In whatever manner a healing occurs, it is still a matter of faith as to whether Jesus was involved or not.

Would His being physically present really prove anything? Many denied Him in spite of His miracles in the New Testament. Would that change if He were here now?

This is one of my favorites.

If Jesus prevented a tragedy, how could you know that? How can anyone know a tragedy has been prevented if it never happened? Obviously, you can’t.

In the same vein, how does anyone know tragedies haven’t been prevented?

Would it be easier to determine if Jesus were standing before us? Exactly what would we expect to see Him do, if He stopped a tragedy before it started? Deep intense concentration? Clenched fists? Grimacing and looking up to heaven? Groans, moans or other noises?

Not sure, right? We don’t really know the answer.

Would God need to wait for a tragedy to begin developing before preventing it? Wouldn’t He know ahead of time?

Even then, how could we prove Jesus did the reversing? Just because we can see Him, it doesn’t mean we can see His hand literally holding off the tragedy.

A visible Jesus isn’t the answer to our doubts and it isn’t His method of choice to save the world.

His physical presence wasn’t well received. The more visible He was the more opposition there was. That opposition added no value and was an unnecessary distraction for those trying to think through eternal implications.

Not only that, celebrities draw crowds. People looking to make a heart felt connection with a Savior would be blocked and eventually put off by crowds.

Jesus drew crowds often in the New Testament but on one occasion the crowd was so great the only way one man got to Jesus was through the roof of the house in which Jesus taught (Mark 2:1-12). He was a cripple and needed the help of four friends to lower him through the roof.

A physically present Jesus would be difficult to access. A spiritual Jesus is always close.

The idea that people would be more likely to believe if Jesus were the guest speaker in our next church service is not substantiated by reason, logic or anything in the New Testament, even if His identity could be verified.

The opposition to Jesus, by the way, wasn’t an expression of unbelief but disbelief. The opposers couldn’t deny Jesus but they wouldn’t commit to Him either.