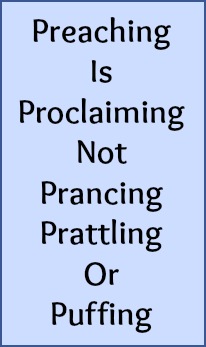 Even the blind and deaf have the means and skills to write out their thoughts, and technology makes it possible for them to communicate those ideas easily.

For most of human history that wasn’t true.

Writing has been around for a long time but the earliest format, engraving on stone, was restrictive to say the least. Just ten commandments required two stone tablets. Tom Clancy’s latest book would require a mountain of rock.

Even when lighter materials like papyrus became popular, copies could only be reproduced by hand making it very difficult to circulate documents widely.

If you are of the opinion that following the old paths means eschewing technology, you’ll need a truck to carry your Bible to church each Sunday. You’ll struggle to flip to the book of Psalms too.

Not to worry, though. Since reading wasn’t as widespread in the Old and New Testaments as it is now, reproduction and circulation weren’t issues.

But, these facts do raise an obvious question. If written documents couldn’t be shared easily, and many couldn’t read or write anyway, how were community-relevant ideas communicated.

The answer to that question is quite primitive. The most popular form of communication throughout most of human history was the spoken word and the best way to spread important news quickly and widely was through public proclamations.

These proclamations were made by specially designated people in high-traffic locations like the city gates or the courthouse steps. The people appointed for the task were known as the Town or Public Criers and they were clad in special clothing to single them out. It was all very official.

Even as far back as the time of Esther (5th century BC) the King’s official proclamations were communicated to 127 provinces by couriers and criers. It took several months to get the message out but considering the geographical constraints and the lack of technology, that’s not bad.

Criers were the interface between governments and the communities they governed. When information needed sharing, criers would ring a loud bell and cry “hear ye, hear ye” – or something similar. Once they had everyone’s attention the crier would then state or read the announcement.

Education, democracy and technology have made criers obsolete. Education makes reading, writing and thinking skills common. Democracy encourages the sharing of ideas publicly. Technology makes it possible for those ideas to spread quickly.

There’s really no comparison between the media of the New Testament and the media of today. Resonant penetrating criers of yesteryear are easily drowned out by today’s most mild mannered tweets.

This brings me to the topic of this post: Preaching.

At its root the word means to officially proclaim, herald, announce or declare important information, and that is exactly what public criers did. They preached.

Preach Is A Secular Word

You read that right. Preaching is a secular word. There’s nothing mystical or miraculous about it. And it was borrowed, not coined, by the church. At it’s root, there is nothing particularly spiritual about the act of preaching.

You might be thinking that I am now going to say that with all the technology available today, preaching is obsolete. Not so.

My point is that preaching, as it is done today, is not the preaching of the past.

When a crier rung his bell everyone stopped and listened. Something important was about to be said. They couldn’t afford to miss it.

Today ministers don’t ring bells and when they speak they aren’t always well received. Preaching (proclaiming) is no longer afforded the same attention. There’s a reason for this.

Although preaching was once a respected occupation and proclaimers were clear spoken, reliable people, that doesn’t follow suit today.

Preaching is now associated with negative terms: haranguing, harping, finger pointing, condescending, condemning, lecturing and worse. One way to insult someone is to refer to them as preachy.

Why I mention this is because “church” has become a synonym for a “preaching” service. If there’s no preaching it isn’t church. In fact, preaching has taken over.

And I don’t mean preaching in the sense of well articulated thought, clearly enunciated. I’m talking about prattling, which is sometimes too low to hear and sometimes too loud to bear.

That isn’t how church is defined and if you asked, few would agree that “church” and “preaching” are the same but whenever church happens, you get preaching.

Whatever the meeting format (dinners, fellowships, special days, reward ceremonies), when church folks get together, one or more people usually make some kind of point publicly for all the rest. The point is usually about salvation. Even weddings are used to reiterate these truths.

I’m not saying it is wrong to share the Gospel. There is a place for teaching, learning and hearing new stuff. Whatever we know about anything, we learned and there is plenty to learn about God.

The question is, must everything be anointed with a public proclamation? Should public announcements define every meeting?

It is true that the Bible says that one method God chose to spread the Gospel was preaching, but we need to ask why before we make it the ringtone for every public gathering wherever that may happen.

We also need to ask why the Bible refers to preaching as foolishness. What makes it foolish?

Must it be dishonorable, sloppy and ill prepared? Are we to intentionally do something to make it foolish or is it intrinsically foolish by nature?

Obviously, the content is not meant to be foolish. That’s the Gospel and if the job is done properly it will be accurately represented and clearly argued. There’s nothing foolish about that.

The manner shouldn’t be foolish either. In fact, the delivery should be practiced. Otherwise we are in danger of becoming Paul’s noisy gong or clanging cymbal (1 Cor. 13). Poor delivery only makes things more foolish.

Maybe preaching is foolish because it is the least reliable method of transmission. It’s word of mouth, restated repeatedly.

Proclamations were originally reserved for new information. Every preaching moment should, therefore, be infused with well thought-out information. If the information isn’t new, the perspective should at least be fresh.

Preaching Was A Necessity Not A Requirement

As they say, necessity is the mother of invention. The Gospel needed spreading and the best way to spread it was public proclamation. They could and did write out the relevant bits but reproduction and circulation were cumbersome.

The Gospel was preached because there was no other way to spread the message.

Spreading Truth Was The Mandate, Not Preaching

Church should be defined by the Gospel, the truth, and the qualities engendered by that message.

Church should be associated with the news, which in this case is the Gospel, not the means of sharing it. The news is significant. The method used to disseminate it isn’t. In fact, nothing good or bad is added to the news by the messenger or the method.

Preaching Is A Method, Not A Ceremony

Yes, God did allow preaching (public proclamation) as the initial means of getting the message out but why wouldn’t He? What other options were available? It was the accepted means of public communication.

In the first century no one had to be told what preaching was or trained how to do it. No one had to justify or defend preaching as a method. It was the done thing.

It wasn’t just a method, it was the method. God allowing it to be used didn’t make it an inspired right. It was temporarily allowed until something better could develop.

God could have skywritten the Gospel for all to see but I doubt it would have been better received if He had.

Preaching Was A Temporary Measure, Not A Religious Rule

Let’s face it, there was always the possibility that the news, whatever it was, could be skewed quickly. We’ve all played Broken Telephone. It doesn’t take long for a message to go astray.

God used preaching because it was the only method of the day. If news was to be shared, that was the way it was done.

While first century leaders were preaching, however, God was making sure the message was recorded in writing for later generations. These later generations would have the skills to read, write, think, discuss and even debate the issues.

They would also have the tools to graphically and creatively (meaning memorably) share the message with countless numbers of people at one time.

Preaching Is A First Step, Not An End

We don’t just preach to unbelievers. We also love them, forgive them, encourage them, support them, understand them and even side with them when we can.

The job isn’t finished when you’re done preaching. It’s just starting. Preaching is most effective when it is followed by life.