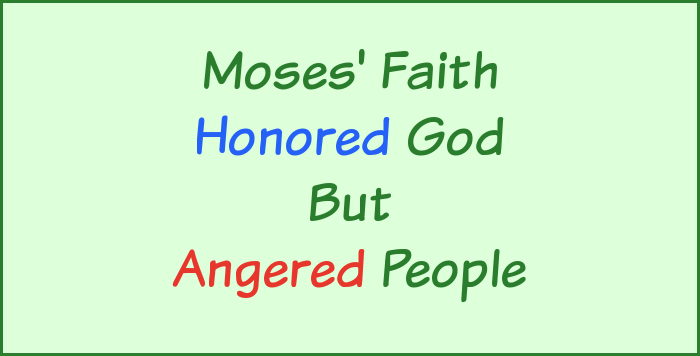 Moses Breaks
All The Molds

Moses is the guy that intrigues us all but I don’t know of anyone who wants to trade places with him. King David, yes, but not Moses.

Moses accomplished more in his life than any other Bible figure and he wore many pairs of shoes in the process: statesman, historian, judge, commander, prophet, author, teacher, and intercessor, but that doesn’t make him appealing.

Interesting, maybe, but not appealing.

I’ve never aspired to lead a nation, and can’t understand why anyone would, but Moses didn’t just lead a nation. He did something much more complicated. He built one.

People who read Moses respond in two ways. They love God or accuse Him. Let’s talk about it.

The life of Moses is divided into three stages that make it easy to analyze.

Significant events in the first two stages shaped Moses in ways that prepared him for God’s ultimate purpose. The high points are:

Moses Gets No Credit For His Accomplishments In Stage One

Sorry if that upsets anyone but we just can’t give Moses credit here. The Bible doesn’t recognize his faith until he moves into stage two.

The person who gets the credit for stage one was Jochebed, the mother of Moses. She exhibited the greatest faith.

It was her actions that saved Moses from destruction. It was her strategy that got him placed in a position of enormous advantage.

Some might argue that Moses gets credit for taking advantage of his opportunities – great education, military training, accomplishments.

But I’m not so sure.

Any child in Pharaoh’s house would have been surrounded by tutors, assistants and counselors whose job it was to make sure he or she learned. The mentors would also be responsible for bolstering the confidence of their charge.

It would be more difficult to fail in those circumstances than succeed.

In fact, there is evidence to prove this. The Bible refers to Moses as the meekest of all men (Num. 12:3). That’s not the temperament usually associated with aggressive, dominant leadership.

Also, at the end of the second stage, after shepherding sheep through a wasteland for 40 years, he wasn’t so confident. When God commissioned him to deliver Israel, he fearfully asked God to let someone else do it. Not the response of a man naturally imbued with confidence.

The Second Stage Was Rather Bland

Moses got off to a good start – attempting to deliver his people – but after than nothing.

The only significant change in Moses’ life during this stage was the development of humility. That’s it. Nothing more, nothing less.

He herded sheep. He got married. He had kids.

He knew how pyramids were built but that knowledge was irrelevant. I doubt he had casual conversations about designing and transporting pyramid blocks.

An aristocrat in Egypt would have had his choice of the best of the available young ladies. Instead, he went from being a notable military leader, in arguably the greatest power center of that day, to being the husband of a commoner unknown to everyone.

He went from being Moses the great to a lowlife shepherd. It was humbling because it was humiliating.

It’s interesting to note, though, that two of God’s greatest servants (David and Moses) were both shepherds before God used them. Humility served them well.

It’s also interesting to note that the Bible magnifies humility. It is one of the greatest qualities we can develop.

Christ was the great example of humility and we are told to be like Him.

Do nothing from selfish ambition or conceit but in humility count others more significant than yourselves. (Philippians 2:3)

The Apostle Peter represented humility not as a convenient add-on to be employed when needed, but as a necessity. It is essential. We should be clothed with it (1 Peter 5:5). We should no more leave the house without wrapping ourselves in humility than we should leave without getting dressed.

Now for the lessons we learn from Moses’ experience.

Moses’ mother was a great example of success. She exercised faith and the effect was immediate.

She devised a plan to save her son from destruction and it worked.

She also cooked up a plan to stay in his life (nursing him for Pharaoh’s daughter) and it worked. No doubt she finagled a way to be included in the entourage that mentored young royals.

It is likely that she planted the seed in Moses’ head that he would one day deliver Israel from slavery. I’m sure she recited the promises God made to Abraham, Isaac, and Jacob. She probably reminded Moses often how greatly God had worked in his life.

Moses had to believe deliverance was the next step and his part in it was obvious. However, when Moses acted on that idea, he wasn’t rewarded. The warm fuzzy never materialized. Instead of a victory parade, he was running for his life.

He fell on his face. He was stopped in his tracks. He was a laughing stock to Israel and the target of Pharaoh’s displeasure. God didn’t seem to be anywhere close.

Moses knew what it meant to be successful in human endeavors, but he wasn’t so familiar with faith. As it turns out, his apparent failure to deliver Israel was a necessary first step.

The common perception on faith is:

If I have enough faith I can get anything I want out of God: healing, success, recognition. The results are only unimaginably wonderful. Massive joy, nothing but happiness.

Yea, I like that idea too but the truth is Moses’ faith rarely if ever, reflected such a notion. If you were there and happened to ask Moses what faith was like for him, whatever he said would translate into something like:

I mean no disrespect toward God or faith or Moses, but his faith experiences were often horrible.

I’m not saying it should be that way or we should always expect it to be like that. I’m saying that Moses teaches us that sometimes that’s the way it is.

Sometimes that’s the way it is a lot.

His first attempt to deliver Israel got him exiled.

His second attempt elicited nothing but ridicule from both Pharaoh and Israel. The more he tried, the more unhappy everyone was.

Once out of Egypt the people went from one bickering moment to another. And Moses was exercising faith the whole way.

A person’s experience with faith, whether it is good or bad, is determined by the goal their faith is attempting to achieve.

And in Moses’ case, the happiness part was often dependent on other people. He was honoring God and accomplishing great things but was getting spit at by God’s people.

Moses even had trouble with his own family members, Aaron and Miriam (Numbers 13). His wife wasn’t too happy when she had to circumcise their two sons.

We expect genuine faith to issue forth in shiny new outcomes instantaneously. The three big accomplishments in Moses’ life – delivering Israel from slavery, leading them in the right way to worship, and delivering them to the promised land – took a lifetime (40 years) and was resisted as much by the people he led as the people they encountered along the way.

That isn’t what we’ve come to expect.

When we have a need for healing, popular thinking leads us to assume that all we need is faith and the problem is solved completely. There’s no residual effect. No scars or limps or twitches.

That didn’t happen in Moses’ experience. He teaches us to rethink faith.

God Doesn’t Have A Limit But We Do

It took approximately two years to reach Canaan and it was rough going. Instead of toughing it out, the people complained repeatedly and bitterly.

The Canaanites frightened Israel. Instead of believing God could save them, they assumed God brought them to the land for destruction.

They had forgotten all the other interventions too.

And God had to respond. How could he not? The people had repeatedly expressed unbelief – ten times, at least (Numbers 14:22). At some point, the human psyche breaks, and that was true here. Past responses were now the only predictor of future behavior.

How God responds seems surprising, but maybe not. He tells Moses that He is going to destroy the entire nation and then start over with Moses.

Extreme, hey? But don’t get too excited. This was a test for Moses. Killing someone when things got bothersome was how Moses did things. He had 3,000 people executed after the incident with the Golden Calf.

God didn’t instruct him to do that. He was just doing what military commanders of that day did.

This time, however, there is a change and Moses responds in a brilliant fashion.

But Moses said to the Lord, “Then the Egyptians will hear of it, for you brought up this people in your might from among them, and they will tell the inhabitants of this land. They have heard that you, O Lord, are in the midst of this people. For you, O Lord, are seen face to face, and your cloud stands over them and you go before them, in a pillar of cloud by day and in a pillar of fire by night. Now if you kill this people as one man, then the nations who have heard your fame will say, ‘It is because the Lord was not able to bring this people into the land that he swore to give to them that he has killed them in the wilderness. ’ And now, please let the power of the Lord be great as you have promised, saying, ‘The Lord is slow to anger and abounding in steadfast love, forgiving iniquity and transgression. . . (Numbers 14:13-18)

And Moses passed the test. God accepted his arguments.

That leads us to the next lesson which is short but important.

Another Person’s Failure Is Your Opportunity To Rise Above

When the Israelites refused to enter the land and God offered to destroy them, Moses didn’t respond judgmentally. Moses was a military man and military justice can be quite harsh. He understood the need for rules and disciplinary action but in this case, a better side emerged.

The Israelites failed badly but instead of acting indignantly and resorting to swordplay, Moses was grasping a new idea. Not every problem is solved with bloodshed. You can rise above.

The Israelites were going in one direction and Moses was growing in another.

All the miracles the Israelites experienced had no effect on their character. They changed the circumstance only. As soon as new problems arose, the miracles of the past were forgotten. Old thinking and usual responses persisted.

The people never learned to trust and people who rely on miracles never do. Instead of begging for a miracle we must work through problems and devise solutions. Resourcefulness isn’t a sin.

“Let God do it” is not a good strategy.

People get along and work together best when they share core values. These values are tent pegs for the soul and they are hammered home from an early age. They keep us steady.

Circumcision was a core value for Moses but when he married Zipporah, he forgot to mention it. It didn’t, however, go away. You can repress a core value in the short term but eventually it comes to the surface.

Moses rediscovered this particular value on the road back to Egypt and Zipporah was the one who handled this nasty job. She wasn’t happy about it.

This particular value was instituted by God and it was seen to religiously and ceremoniously, with great devotion. It wasn’t something to wave off.