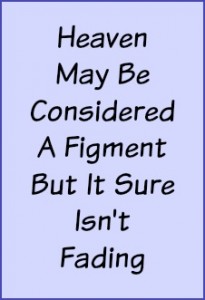 Heaven
According To Everyone

Heaven is a trending topic so it is no surprise that people are thinking and writing about it. Lisa Miller’s book

, however, breaks the mold.

Lisa’s book isn’t a Bible study. It isn’t a book on theology. Instead, she writes from the perspective of human longing, expectation and hope.

The Bible isn’t ignored but it doesn’t feature as the only or even the primary source of information.

I first learned of Lisa, and her book, when she did an interview with Rob Bell for the release of his book, Love Wins. Although the interview was more about Rob’s book, there was an obvious secondary motive.

Rob’s book started out a best seller, bebuting at number 2 on the New York Times Best Seller list. Lisa’s book didn’t fare so well. Both books were published by Harper.

Given the subject similarity and business connection, it made financial sense to bring Lisa and Rob together for an interview and a double book launch.

Although Lisa is not a theologian of any kind, her frequent exposure to religious people, and the ideas they promote, gives her a clear perspective on what people actually believe. This fact is very apparent in her book, Heaven: Our Enduring Fascination with the Afterlife

Heaven is only one word but according to Lisa’s findings it is understood in a great variety of ways. Everyone, it seems, has a vision of heaven.

The book focuses mostly on monotheistic religions but she includes a broad representation: Mormons, Muslims, Jews and every Christian sect you can imagine. Lisa shares a few of her own thoughts about heaven, but she is more than fair. She interviews and quotes a long list of the living and the dead. Dante and John Milton, along with many other sages from the past, have a say.

It occurred to me while reading the book that Lisa has the uncommon ability to speak to people of very divergent religious opinions without chaffing. How often do you see that?

The book is also a memoir of sorts. She includes snippets of personal history that include her Jewish grandparents’ escape, along with her three year old mother, from the Nazis at the outbreak of World War 2.

In a word, you could call the book very human, and I don’t say that negatively or disparagingly. Rather it’s refreshing because in religious conservative circles, humanity often accedes to regulation.

Does she believe? Not exactly, but she also doesn’t seem to be anti. Her words:

The idea of heaven defies logic, but in my mind it represents hope, and I believe in hope.

I didn’t get the sense that she would be disappointed to discover heaven when she opens her eyes on the other side.

If nothing more, the book demonstrates a very important point to anyone who believes in heaven. Heaven may be considered nothing more than a figment by naysayers, but it isn’t fading.

The book is fascinating. It’s well worth a read.