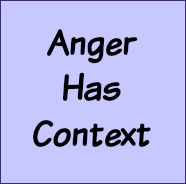 Going Postal is a catch phrase popularized in the last few decades. In everyday usage it often connotes humour, but the phrase stems from very tragic events.

In at least 20 separate incidence between the years 1986 and 1997, 40 individuals were gunned down in various post office locations by people who worked at the post office or had worked there in the past. Hence the term Going Postal.

The one thing all the perpetrators had in common was anger. In each case the anger had been boiling under the surface and eventually erupted in murderous rage, otherwise known as workplace rage. Consequently, anger is thought of only in bad terms. It gets a bad wrap.

Ridding society of anger, however, is not the solution. Anger has actually served many useful purposes.

It is because people became angry that:

These milestones represent great progress in the development of human culture. Anger was a motivating force behind each. That means anger isn’t a bad thing and the Bible agrees.

Since small irritations, though harmless in the moment, have the potential to spiral into death-grip rage we need to talk about anger.

Anger is very much a part of our lives and it should be.

Everyone experiences anger. The only kind of person incapable of anger is emotionally stunted. Numb. Catatonic. If you can’t become angry on the one end, then you can’t be good humored on the other.

If you can’t experience disappointment, then you can’t appreciate joy.

Even God is capable of anger.

It isn’t wrong to be angry some times, even though it is definitely wrong to stay angry or express your anger in hurtful, violent ways.

Every emotion has a useful purpose, even anger. But all emotions must be managed.

You can’t build a wood-framed house from freshly cut trees. Only after the trees are processed into consistently sized planks, can a house be framed.

Emotion is like a fresh cut tree. It is raw material until it is processed. That is particularly true of anger: raw, exposed, vulnerable.

Anger, when processed properly, has the potential to become a building block.

Whatever the emotion or the action that follows, both require management and that involves personal choice.

A person’s habits may be the outcome of how they chose to process emotions. When life delivers stress, which it inevitably does, some people resort to:

All of these responses mask the problems of life effectively but if not curbed they become addictions.

Let me be clear, though. The problem is not the emotion. It is the way the emotion is processed.

Processing any emotion properly pays big dividends and that is true of all emotions, even anger. The idea is to manage anger properly, not dispel it.

Without anger many difficult situations would never change. Anger helps:

There are times when you should become angry. Of all emotions, anger is fundamentally the catalyst of healthy change.

Women of today vote because women of yesteryear became angry about not being allowed to vote.

Anger doesn’t just happen. It has context. An angry moment is preceded by some stimulant: insult, mistake, disappointment, failure, inconvenience, abuse, injustice, unfairness, etc., and it is followed by a response. There is no such thing as stand alone anger.

Although anger can be stimulated by many different things, there are only three responses:

if you’re human and live among humans, trying to avoid or ignore anger is unrealistic.

We get our anger cues from adults and peers. When parents respond to inconvenience angrily, children learn to do the same. What is modelled becomes the standard. We become like the people we mix with.

Parents who are angry, exemplify anger to their kids. Kids who adopt an angry style from parents gravitate to angry people and the response is perpetuated.

It takes very little to ignite anger but it takes a lot of intelligence and training to avoid spewing it.

Anger Is The Good Guy

But anger’s not the bad guy.

We wrongly assume that anger is the bad emotion and the only honorable thing to do is avoid it. That kind of thinking isn’t just wrong, it is illogical.

Some studies even indicate that the connection between various health problems and anger is not as definite as some would suggest. There is no question, however, that over eating to stay happy is definitely the cause of many health problems.

A first response to anger is holding it in, but there’s really no such thing. Anger can’t be bottled indefinitely. It seeps slowly in the form criticism, cynicism, disagreeability, passive aggression and when bottled for too long, the postal version may come out all in a rush.

The second and more direct response to anger is to openly express it. Attack the person or thing perceived as causing the anger. We are familiar with what this looks and sounds like.

Expressing anger in this manner makes the angry person feel great. The initial pain is numbed but the issue causing the pain never resolves. It spreads the pain and increases the venom. The situation only becomes worse.

Why Does This Happen

Or more specifically, what are people thinking when they express anger improperly?

Good question. A part of the answer lies in should/blame thinking. Psychologists refer to these as trigger thoughts.

Should thoughts are based on the idea that you know exactly how things should be and exactly what others should do. In theory you may be right, but no one ever does what they should at all times and you really can’t be sure that your ideas are absolutely correct anyway. You may have a good plan but it isn’t the only plan and may not be the best.

But there is also the Blaming thoughts. This happens when we assign blame to others for our bad circumstances. You’re lonely or you’ve been hurt or your frightened or you feel smothered by your circumstances and it’s easier to blame someone else than find a solution.

Blamers make their happiness the responsibility of other people. These people become angry and seethe inwardly over the ill treatment they endure. They love self pity and fail to take positive action to change their circumstances.

Anger, they feel, is their only option.

Managing anger is a process. Snapping your fingers won’t solve the problem.

If you are angry about how your wife mashes the tooth paste tube, get over it.

Don’t qualify the list. Just make it. Write every impulse down: punch the boss, bush-bar bad drivers, insult the neighbor, yell at the wife, beat the kids.

Once you’ve eliminated killing and maiming you can formulate constructive responses. You can also moderate your expectations. The all-or-nothing attitude won’t work in an angry situation.

Let others know what you need but be willing to make generous allowances for their perspective.

This is a tricky matter because false humility is condescending in the extreme. When attempting to diffuse an angry situation you must never come across as speaking down to people.

If anything you must attempt to get on their level or even below them to make your appeal.