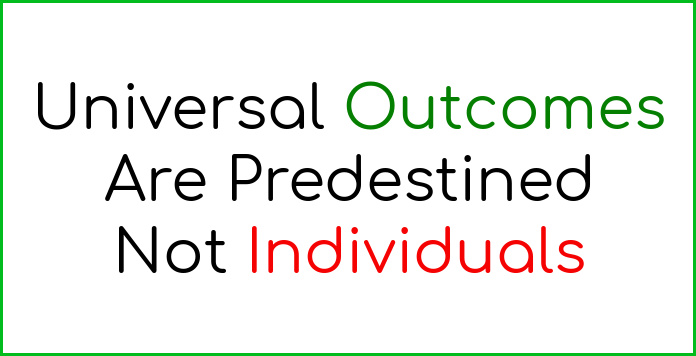 Of All Moral Choices
Salvation Is The Simplest
And Least Complicated

In the colonial era of American history, religion was very prevalent. The first settlers on American soil were religious dissenters, aka Pilgrims or Puritans. They lived by a very strict rule of life and church was the central point of their lives.

One well known minister from that era, Jonathan Edwards, preached a sermon titled Sinners In The Hands Of An Angry God. The topic was Hell and no one could describe it better than Edwards.

In response to that sermon, almost the entire congregation reacted in some way. They wept in their seats, moaned, begged for mercy, cried out, walked around, fell down and more. That service is thought to be the start of the great revival that swept the area.

What people don’t always point out is that the colonies were immersed in the doctrine of Calvinism and those early Christians took the belief to it’s logical end.

Calvinism is the belief that God alone determines which individuals will be saved and which will not, and these eternal choices were made before creation.

In other words, if you or any other person is a Christian now, it is only because God decided in eternity past that He would save you. He saw you before you were conceived and chose or elected you for salvation. God was personally and intimately involved with you even before you were you.

In the colonial years, they believed that salvation was entirely a work of God. The Elect need do nothing, indeed could do nothing.

If any person approached a Christian leader and asked how they could be saved, the answer was simple. Nothing! You can do nothing to make it happen or to avoid it. If God has chosen you, you will be saved.

It is no wonder then that so many people responded so emotionally to Edwards sermon. If the listeners were longing for heaven – a reasonable assumption since they were in church – but were insecure about it, how could they not?

It doesn’t stop there.

The logical extension of Calvinistic thinking is that anyone who doesn’t get saved, doesn’t get saved because God decided not to save them in particular. He knew each one of the unsaved in eternity passed just as personally as He knew the saved but decided not to save them, which means He decided they would be damned. That was the only other option.

To be fair, Calvinists argue that God didn’t decided to send the non-elected to hell because they were already headed in that direction. Everyone starts out on that road, but that argument doesn’t help much.

According to Calvinists, at the very moment God was choosing some to be saved from hell, He was ignoring those He decided not to save and that’s OK because the unselected ones were going to hell anyway.

The more Calvinists talk, the worse it gets for them.

Calvinism, of course, is not a word in the Bible. It is the name of a man who lived in the 1500’s and popularized the teaching, John Calvin. Calvin gave these teachings institutional weight when he published his ideas in Institutes of the Christian Religion, 1536.

He wasn’t the first to teach these ideas.

Saint Augustine (4th century AD) also wrote about Calvinism, although he and Calvin differ a little, as do most who believe in Calvinism. Augustine wrote about the doctrine extensively but, thankfully, it doesn’t predominate in Catholic teachings.

In the words of Calvin, the doctrine is defined as:

God’s eternal decree, by which He compacted with himself what he willed to become of each man. For all are not created in equal condition; rather, eternal life is foreordained for some, eternal damnation for others (Inst. III, 21, 5).

There are several reasons the idea is illogical and therefore fallacious.

Calvinism bolsters the worst in human nature. It encourages bigotry, chauvinism and even jingoism.

When one nation or people group considers itself chosen, and therefore superior, there is no happy ending. The chosen are always privileged and everyone else is marginalized. The result is aggression both ways.

There are many examples of this.

Calvinism isn’t always the driving force behind every case of genocide or oppression but in these cases it was. The Pilgrims were Calvinists. The Explorers were influenced by Calvinism and Hitler made good use of Calvinistic thinking to support his immoral regime.

Logically, It Makes No Sense

We believe that God made each person with an amazing capacity for learning and development. We say things like,

You can be anything you want to be.

You can do anything you set your mind to.

And many of our most favored political documents (e.g. Magna Carta, Declaration of Independence) promote the kind of liberty those sayings imply.

Calvinism, however, strips us completely of the one liberty that means the most. The liberty to accept or reject Christ. The freedom to be self aware and honest about personal weakness and failure.

I’m not saying we can save ourselves. Self help programs aren’t the answer, but any person can know they need help and can honestly confess that to God. Or refuse to.

That is a valid choice. Any person can make it. Unless Calvinism is true.

Logically, It Is Cruel

Hell is a threatening idea. Thinking you might go there because you weren’t chosen for heaven is horrible in many ways.

It smacks of a partisan attitude. It encourages a cliquish, entitled, condescending, judgmental, haughty mindset. It divides people. It makes some feel privileged and proud while others feel rejected.

It breeds a smug, self-satisfied, I’m OK you’re not outlook. The kind of thing we’re taught to avoid in grade school.

All of that makes it cruel.

Logically, It Disallows The Simplest Moral Choice Of All

The decision to get saved is a moral choice. According to Calvinism, it is a choice no one is capable of making.

But if this moral decision isn’t possible, why would any other moral choice be an option. Morality is morality whether it involves salvation or not. Why would the prohibition of choice only apply to salvation?

Also and most importantly, of all moral choices, salvation is the simplest and least complicated. It requires the admission of sinfulness, not a full and detailed accounting of every sin. No other moral choice is simpler.

The person that hears my word and believes on Him that sent me has everlasting life. . . John 5:24

It can’t get any simpler than that.

So if humans are incapable of knowing and confessing their sinfulness, then how could we ever make the complicated moral decisions that confront us daily?

Here is what we have:

What that means then is that the only choices humans can make are immoral. We can only make bad choices. Any good choices we might make are only accidental.

Calvinism creates a dilemma. If even the elect are incapable of making the simplest moral choice, how can anyone be judged for making immoral choices? Shouldn’t we all be exempted from consequence?

You get the point. Where does it stop?

Every challenge against Calvinism is met with by an unending, twisting, tangled maze of arguments. keeping track of each argument and how they interconnect is like playing fifteen games of chess simultaneously.

Very few people can do that.

You’re not going to understand this. No one really figures it out. Many Calvinistic thinkers even admit that the only thing you can do is acquiesce.

Calvinists spend inordinate amounts of time explaining why “World” doesn’t mean everyone and why God’s desire that all men come to the knowledge of the truth doesn’t really apply to all men.

God wants everyone to know the truth but only some to embrace it! Does that make sense?

If you weren’t confused before, you will be.

The Bible is God’s simple message of salvation. You don’t need a degree to figure it out, but you’ll need one to get your head around Calvinism.

Logically, It Contradicts What The Bible Says

A few of the verses Calvinists have written volumes to explain, or maybe I should say correct, follow:

(God) will have all men to be saved and to come to the knowledge of the truth. 1 Timothy 2:4

The Lord is not. . .willing that any should perish but that all should come to repentance. 2 Peter 3:9

For whosoever shall call upon the name of the Lord shall be saved. Romans 10:13

That’s just a few. There are more.

Logically, It Encourages Christians To Lie

We are commanded to preach the Gospel to everyone. Jesus plainly said:

Go into all the world and preach the Gospel to every creature. Mark 16:15

But that means Jesus is commanding us to lie. If only some are elected and we present the Gospel to everyone, then we are bound to tell some of the non-elect that they can be saved when they can’t.

If we don’t qualify the Gospel – it is good news only for the elect – then we are knowingly misleading the non-elect, which is the same as lying.

Would Jesus really tell us to do that?

All These Observations Makes Calvinism Unfair

Yes, God can do anything He wants but I can’t imagine any scenario in which He would want Calvinism. It isn’t fair and goes against everything the Bible says about God. I doubt He would deny Himself (2 Timothy 2:13).