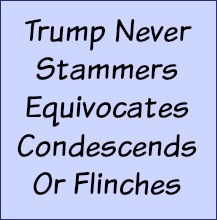 Donald Trump is not your average institutional guy. He has never been a politician. He’s worked with many people in his businesses but his history of winning has nothing to do with concessions from peers.

When he announced his candidacy, very few took him seriously. I didn’t. It smelled like another publicity stunt. But Mr. Trump’s actions since have eroded the doubts. He sounds more and more believable all the time.

Even though he’s never held public office, he did run a short lived campaign for the 2000 Presidency. The campaigned stalled because the party he represented – Reform Party – was dysfunctional, according to Mr. Trump.

This isn’t the first time he’s considered the presidency, either. It was a consideration as far back as Ronald Reagan.

That means He’s not a Johnny come lately. He’s primarily a business man but he’s made a habit of speaking out on public affairs many times. The Donald has never been afraid to share his thoughts. People like this.

He has a battle on his hands with Hillary but following are several reasons he might edge her out.

He Enjoys The Public Eye

It goes without saying. The President is a public figure. He lives under a spot light and how he responds to that light is an important factor.

The campaign trail is usually where we get a glimpse of how candidates handle the exposure. When they fluster, stutter, falter or blink in confusion, the ratings go down. Some candidates work hard to prepare for these spotlight moments. It doesn’t come natural. The ones that get our attention are the ones that bask.

Bask may not sound like an appropriate characterization for a President but let’s be honest. The guy who halters, stammers or dodges is less likely to be believed or followed.

If you know The Donald, you know he looks you in the eye. He doesn’t hesitate. There’s nothing equivocal about his public manner. Every person may not like Mr. Trump. Some may not understand what he means but no one will scratch their head wondering if he is confused or uncertain. He isn’t shy.

He Is Aware Of The Issues

Many don’t like his style and he shoots from the hip a lot, but he is aware of the issues. This isn’t his first dance.

Any issue. You name it. He’s said something about it. And, unlike career politicians, he’s said enough to give a general idea of what he really thinks on the issues. Refreshing!

He cares about the little guy too. There’s no card up his sleeve to trump social programs.

Mr. Trump makes statements that career politicians could never get away with. I’m not saying he’s always right or you should agree, but instead of fearfully taking on the media’s framing, he misses no step in putting a different spin on his off-the-cuff remarks. He does it convincingly.

Hillary, nor any other politician in recent history does this well. Remember Dan Quayle? Right or wrong, he never got over his Murphy Brown remarks.

Personally, I don’t think there’s any substance to Hillary’s email snafu, but she’s still reeling over the outcry. This kind of stuff rolls off Trump’s back.

The public isn’t used to plain speaking politicians, especially since the media convulses over anything they perceive as blood in the water. But every time Trump is accused of political/social incorrectness he never flinches. He explains why the perception is wrong and moves on.

He’s Never Been Short On Ideas

He hasn’t always succeeded like he expected. He’s tried and failed several times, but his record overall is a good one.

Many speculate about big money controlling political agendas and office holders. Well, here is a guy who epitomizes big business but instead of controlling from the sidelines, he wants to stand in office and use his ideas – and experience – to Make America Great Again.

That makes him a man of the people more than Hillary or Obama. Reaganesque but only more so.

He Has A Nack For Catchy Sayings

The 2016 slogan is Make America Great Again. There is a question as to whether he originated the phrase or not, but even if it didn’t originate with him, he sure has popularized it. Many of his other sayings are sticky also.

Sometimes by losing the battle you find a way to win the war.

Very insightful coming from a man who is known for his winning ways. And there’s more.

And he has a sense of humor.

Sorry for the last one Mr. Trump. I couldn’t resist.

He’s never been a politician but he’s rubbed shoulders with all the ones that count. He’s contributed to their campaigns. He’s shaken their hands. He knows their policies, what they think, what they want and how they work. The ones he doesn’t know are probably the small fish.

He Isn’t Owned By Anyone

He’s self funding his campaign! Who does that?

Yes, many individuals have made contributions but Trump has contributed millions, about two-thirds of the money. If he needs more, there’s no question where the bulk of it will come from.

The important bit is this. No big business is behind Trump. That’s good news for everyone. Outside of Ross Perot, no one else has approached the presidential campaign as financially independent.

He Isn’t Right Or Left

He’s Donald Trump. He’s probably a little right of Hillary and little left of the GOP. The real issue thought, is he has the sense to know what isn’t going to work and he has the inertia to get things moving in the right direction.

I don’t know who will be the better President and I’m not sure there’s much in the difference, but if I’m betting, I believe Donald Trump will swing the campaign bat well enough to beat Hillary.