The Toti 69er is an annual cycling race organized by the Amanzimtoti Cycling Club which offers variable distances: 19k, 69k and 94k. The race first started in 2002 and now attracts elite cyclists.

There’s no road closure but the route is marshalled so cyclists are catered for at intersections. The route is also monitored by emergency vehicles and CycleSphere provided service vehicles to help with breakdowns.

Members of my club, East Coast Cycling, enter the race each year and since I had the day off I decided to put my name in the hat.

It was different in several ways to the main races in and around the Durban area. The field was light. A total of 330 entered and there were a few no-shows on the day. To give you perspectve, 330 is less than one batch in the Tour of Durban or Amashoave. That could be good or bad, depending.

It’s good if you don’t like a crowd but it’s bad if you get a puncture. I did in the first 15 kilometres which meant the bulk of those riding the 94k left me behind. I spent most of the ride on my own. A larger field would have been a benefit.

The weather was a little chilly at the start but was comfortable throughout the day. Batch starts were a tad bit disorganized, but overall The Toti Cycling Club put together a great riding experience. 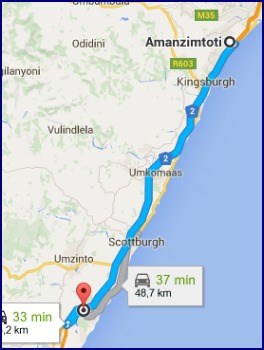 The route follows the R102 between Amanzimtoti and Selborne. No official route map was provided but as you can see is it very straight forward. The only tricky part is getting back into Toti at the end.

The scenery is great. Views of the Indian Ocean, small communities and rural settings. It’s all good.

Probably the biggest difference between this race and others, like Tour of Durban or Amashova, was the road surface. At least two-thirds of the race is gravel. Not the loose kind but the gravel that is laid with asphalt. It’s rougher than usual.

Mountain bikes handle gravel surfaces well but road bikes not. I had no experience with gravel but learned a lot in the process.

I got caught in the middle and ended up with a puncture. For the record, Live Strong recommends 25mm to 28mm tires for road bikes on gravel.

I also learned not to believe everything you read on websites. ROAG says the elevation of the route is approximately 800m, which is one of the reasons I was motivated to enter. Our club rides do that much climbing over 70k, so I figured this would be simple.

My Edge 500 clocked over 1100 meters of climbing. That’s not a bad thing. It’s good for training but I didn’t expect it.

Either my device is wrong or the website needs adjusting. My legs tell me the device is spot on.

Oh, and one last bit. If you do the race, pay attention on the route going out. I didn’t watch and got lost coming back in. Had to stop and ask for directions, and had to ask twice. The first person told me to turn left at a certain road but was gesturing right.

I confirmed what I understood this good intentioned person to mean by asking someone else.

It was a great training ride! Hope to see you next year!