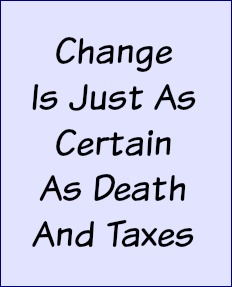 Every One Changes
Every Day

Change is what we do. It can’t be avoided. The problem is we don’t always change in the best ways or the right direction.

Sometimes abilities lay dormant. We don’t make the effort to develop them.

Sometimes abilities diminish. We develop them and then don’t use them.

Sometimes we take on bad habits or waste energy attempting to be things we can’t or shouldn’t. Not wrong things but things outside the limitations of our talent set.

Sometimes and worst of all – but strangely acceptable to most – we plateau. We reach above-average, rest on our laurels and stop forging ahead.

The Bible gives us many reasons to see Change differently.

Paul made a very interesting statement to the Philippians:

He (God) who began a good work in you will perform it until the day of Jesus Christ! Philippians 1:6

We could probably get into a long discussion about the definition of The Day of Jesus Christ and never reach consensus. But what we can say is that day hasn’t arrived yet. God is still working in the lives of people and you can count on that for as long as you live.

God Cannot Use A Person He Cannot Change

God cannot – God will not – use a person He cannot change. And He changes every person He uses.

God attempts to bring out more of the best in us and gently works to move us in the right direction. He uses people, institutions and circumstances to accomplish this goal. Fighting it is futile. Accepting it is calming.

When David became tired with the inconvenience of change and saw life as routine and boring rather than adventurous, he committed adultery, murder and polygamy in quick succession. Boredom, like idleness, is the Devil’s workshop.

The Changes God Makes May Surprise You

Job is a good example. When things fell apart for Job, he had no idea what was happening. He didn’t see it coming and felt forsaken, betrayed and judged.

But the question is why was this a surprise? Why didn’t he see this coming or at least expect some kind of change.

The answer is simple. It’s human nature. If we compare favorably to everyone around us, i.e., we are better than they, it’s cool. We are proud and satisfied.

Job was surprised because he saw himself as the best, and he was. There was no one better. The lesson? No one arrives. Expect continuous change.

The Changes God Makes Will Surprise Your Friends

We learn another important lesson from Job. When God changes your life, friends may not be the place of consolation. The Book of Job is mostly a record of the ongoing argument between Job and his friends about why he did or didn’t deserve the calamity in his life.

But this is where we learn to be gracious. If we struggle to understand what God is doing in our lives, and we have a front row seat, then we should appreciate it when others don’t get it either. If we don’t see change coming, then why should our friends?

I’m guessing Job knew how it felt to be forgiven. I’m also guessing he knew how to forgive people who were clearly in the wrong. Here he learned to absorb, tolerate and graciously forgive those who have no right to judge but couldn’t be convinced of that without of God’s intervention.

But that is an important change God makes in our lives. We move from just forgiven to forgiving. How else can we learn it is more blessed to give than to receive.

The Changes God Makes Won’t Make You A Better Person

Trying to be a better person is certainly a worthy goal but it isn’t absolute. You will never be perfect. In fact, you won’t even get close.

And again, Job is the example.

According to God’s testimony, Job was the best person on earth. No one was better. He stood well above the crowd. He was the example everyone tried to follow, so what was the point? Why did God focus on changing Job?

This is where common ideas blind us to truth. Religion promotes the belief that God’s primary objective is to make us better people. It is common to hear church people pointing out what is wrong and shaming those who do it, but is that the end of the story?

Are we satisfied only when a thief stops stealing? Does all progress stop there?

As far as we know, Job didn’t steal, lie or cheat on his wife. He wasn’t lazy or frivolous. He was a good man. His goodness wasn’t in question, so what was God changing?

The advice is simple. Recognize Change as an everyday experience. Embrace it!