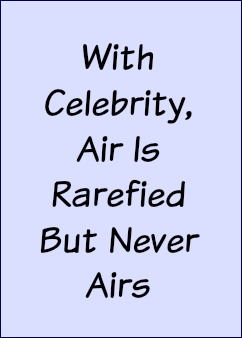 If we can turn off the judgment for a little while, we might learn something from their experience that can help the rest avoid marriage-divorce mishaps. We might even learn to be a bit more forgiving.

Wealth is seductive and draws many admirers. It’s better than pheromones or hormones. It makes those born beautiful more attractive and has a way of camouflaging ugly. It’s uncanny. A money-over turns the most homely, never-before-noticed person into the most-sought-after. Fat wallets give wart ridden frogs a princely sheen.

Money gets in the way of true romance and that’s a problem because there is no shortage of cash with the stratospheric elite. Wealth is a side effect of celebrity but the only thing it produces for certain is a rush of those mining for it.

Unfortunately, money will neither produce a good match nor glue a bad one together. Mike Tyson and Robin Givens illustrate the point.

Celebrities get a lot of attention, and they love it. They don’t enjoy being stalked by in-your-face cameras 24/7 but it’s part of the popularity deal. The limelight has a few sour notes.

But here’s the thing. Being popular means you are the center of everyone’s attention. You’re the important person. Everyone hangs on your every word or response or song or whatever it is that catapulted you into popularity.

Celebrities learn to love this. It’s the staple of their social diet.

What happens, though, when one center-of-attention type marries another? Who becomes the center then? There’s bound to be conflict of interest.

Does one celebrity love the other because they are praiseworthy or praise giving? It’s a good question. It may explain a lot.

With celebrity, air is rarefied but never airs.

There’s pressure with popularity. An adoring public pushes the famous to continually be the person in public they fell in love with on screen (or stage). Try as they might, though, no one can do that.

What is true of human nature – we do things to be accepted – is exaggerated with celebrity. Celebrities try to stay in character and everyone around them tries to measure up. And celebrities are good at this. They make a living putting on airs.

What happens when the mask comes off, which it will inevitably do. It’s difficult to maintain image on a toilet seat. The after effects are astonishingly familiar. There is no mask for life behind closed doors.

What you see there is what you really get and once that cat’s out the bag, it may be put out for good.

We all marry people with faults and we know this going in. With celebrities, the faults may not be as apparent or may be completely invisible until it’s too late.

When two multiple-image people meet and marry, they’re so busy adoring the public person they fail to discover the real one. That is, until they marry, and what they find then might be intolerable.

You can’t marry celebrity. You can only marry a person. Katie Holmes was initially attracted to Mission Impossible Tom. Scientology Tom was only a distant shadow until they married.

Many celebrities start off nowhere and work their way to the top. We’ve all heard the stories and we love it. From nothing on one day, to everything the next.

It sounds exciting but the reality is, extreme altitude change is difficult to manage. They even have a name for the symptoms: Altitude Sickness. In celebrity, altitude isn’t the only problem. The environment is unfriendly too.

It’s like moving from a lowly but steady state country – the mundane – to one that’s a bit unstable – celebrity. Once you arrive, there are no guarantees. Only a select few are allowed in and their status is constantly threatened. Staying at the top is never easy.

And it’s inevitable that stars will eventually burn out. The only way to manage a falling star is step aside. In marriage, that may mean stepping out.

Can you imagine kissing your married partner as you leave for work in the morning and then flirting, embracing, kissing and fondling your supporting actor on set that day? And doing this day in and day out for an entire career.

They’re job is to take on the character of the scripted persona completely. Feel it, embrace it, consume it and be immersed in it. Make it believable.

The ones who do that best, receive the reward, but this raises a significant question. How can an actor fully absorb a different character on set without residual carry over?

How can any person fully love one person at home and another on set? There’s bound to be blowback. These people play with fire for a living.

Instead of condemning the couples who don’t make it, maybe we should spend more time applauding the ones who do.

Celebrity and Stability are not synonyms. If anything, celebrity is to insecurity what yeast is to dough. It agitates and ferments. It makes it grow.

Naturally talented, highly gifted, remarkably intelligent people are not automatically immune to insecurities. Just being extraordinary must make them feel out of place. But what we think of as incredibly charming and entertaining idiosyncrasies may be nothing more than a cover for insecurity.

What happens when what these people are on screen is really a cover for what they and we can’t really bear?

Additionally, what happens when these extraordinary people are not acting? What they are on stage is what they are in life. We love the fact that comedians make us laugh but life isn’t a joke. At some point a serious response is needed.

An actors insecurities, which we may confuse with idiosyncrasies, may charm and entertain us on scree but might be difficult to live with up close and personal.

Celebrities don’t always know who they are, are not always comfortable in their own skin, often struggle with latent or manifest insecurities and find it difficult to separate reality from fantasy.

Even when the person is adorable on some level, the extreme emotional tides may be more than one can bear.

Your Judgment May Be Hypocritical

The lifestyle of celebrities is way outside the box. They don’t just play with boundaries, they realign them completely. But before you pass judgment, make sure you don’t have a TV or Netflix account, both of which prove you have an interest.

And please don’t claim to watch only the benign stuff. Even the Disney channel produces some very spicy on screen personalities.

If the public wasn’t watching and paying, celebrities would have to find another way to entertain.