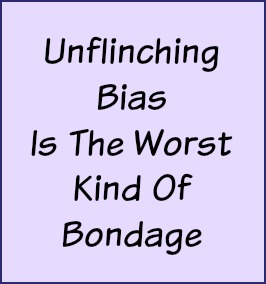 Bias May Become
Obstinance
Before It Becomes
Repentance

John chapter 8 represents a pivotal point in the relationship between Jesus and the Pharisees. It wasn’t the last time Jesus spoke to them or responded to their questions but it does record one of the longest single conversations Jesus had with the religious leaders in Jerusalem. And it didn’t end well.

It took place about 29 AD which means Jesus was approximately two-thirds into His three-year public ministry. The Pharisees had argued and debated with Jesus for two years and even talked about killing Him.

Things were escalating. In the end of John 8, they attempted to stone Him.

There is very little new content in this chapter. Apart from the opening few verses (the woman caught in adultery), the issues had been mentioned before.

The Pharisees complained in chapter eight that Jesus had no evidence for what He claimed. They knew this wasn’t true. Everyone else knew this wasn’t true and Jesus did respond to their accusations but one of the most important statements He made was to those who believed. What He said has inspired and stimulated thought ever since.

You shall know the truth, and the truth shall set you free. (John 8:32)

But getting back to the Pharisees, just to show how misleading their claim was, following are the many times and ways Jesus was attested to. All the references are from the Gospel of John.

In spite of so much evidence, the Pharisees still insisted there was nothing to back up the testimony of Jesus.

How The Pharisees Responded

In spite of the evidence, the Pharisees’ responses are dismissive, defensive and sarcastic.

The Pharisees were clearly being obstinant. There was no open discussion or respectful debate. They weren’t asking questions or sincerely seeking answers. They were not offering rational arguments. Their intent was to cause trouble. Every effort to discredit Jesus had failed and the frustration bled through.

Getting back to what Jesus said about truth, we have to ask what truth He had in mind?

Remember, we’re not all the same. Every human is similar but the individual physical, mental and emotional qualities that make you, you also make you different.

Complicating the whole situation are the truths about how all these facts relate. For example, we know vitamin A is essential to maintain good health. That’s one fact/truth but there is more. Too much of this vitamin can also be detrimental to your health. How much, how often, when and in what form to take this vitamin are also truths to ascertain.

We haven’t discovered all those facts yet. We learn new things about ourselves and the world around us every day.

Life will never stop being a learning process. As long as we have more to learn or discover we are short of all truth.

Additionally, I doubt there is any one person who has immediate recall of all the facts we have in hand or the truth each fact reveals.

I think it is safe to say several things about the truth Jesus was referring to:

And that truth is salvation. It is the most important and longest lasting truth we will ever encounter.

This truth isn’t like a friend you can unfriend. You may doubt your salvation but you can never shake it. And the amazement and wonder never cease.

Jesus also wasn’t talking about a difficult truth to find or process. I came across this truth in my backyard and I wasn’t even looking. Countless thousands can say the same.

Arguments could be made that God created avenues for conveying truth to all humanity in every era. The nation of Israel was a shining light. Light, even spiritual light, moves too quickly to be observed but it’s too bright to be missed. It’s also penetrating.

Jesus was talking about a single category of truth any person can understand and every person can access. Otherwise, the freedom He mentioned is based on ability or status or standing or plain old luck and would apply to very few.

Are we willing to believe that’s what Jesus meant? Was He saying that only a few of us have the ability to make it?

I think it is safe to say that Jesus was NOT talking about all truth in the larger sense of the word. He wasn’t even talking about a large amount of truth. He was focused on some particular truth that was universal enough to be accessible to every person and simple enough to be grasped by all.

But I would go a step further. We can also rule out negative truth. Jesus was focused on positive, affirming, liberating truth.

For example, if it is really true that everybody lies like Dr. House frequently suggested, I’m not sure how that liberates. If I’m a liar and you’re a liar and every other person we meet is a liar, there’s no freedom in that. If anything, it makes us insecure, paranoid or skeptical.

Drug addicts may find comfort in the company of other addicts but is that freedom? Wouldn’t we call that enabling and reinforcing? Isn’t that the kind of bad behavior that encourages bondage?

Another good question to ask is what kind of freedom was Jesus talking about.

It wasn’t material or physical freedom. Slavery was the only kind of bondage the Pharisees understood. In the first century world of Rome, you either owned slaves or you were a slave. It was a slave-based economy. They naturally assumed that’s what Jesus was talking about.

But Jesus wasn’t promising to transform every slave into a plutocrat. Circumstance and situation are what happens around you. The freedom Jesus mentioned happens inside. It’s how you think and feel about your situation, not your situation.

The person who thinks freedom is doing nothing lives in bondage to laziness. Again, being totally free to do whatever you want, even nothing is not what Jesus had in mind.

Here’s is my take on it. Salvation is settled once and forever the moment you believe. Jesus said whoever hears my word and believes on Him who sent me:

Has everlasting life, and shall not come into condemnation, but is past from death unto life. (John 5:24)

There are several takeaways in that statement but the two most obvious are the immediacy and finality of salvation. It happens immediately and once done, it’s done! You won’t need to get saved again, ever. It can’t be lost. And there are no updates.

But even though salvation is secure, your personal insecurities about it don’t automatically or immediately dissipate. Initially, you feel wonderfully unburdened but as soon as you fail, you begin to wonder and worry.

Learning just how real and secure salvation is happens through time and error. The more you follow, the more secure you become.

We all have a bias. It’s natural. One’s particular bias may be wrong but there is no sin in having a bias. The worst bondage in the world, however, is enslavement to old ideas, inflexibility, especially in the face of strong evidence to the contrary.

Changing the mind, however, opens the door to belief and salvation. It’s a process and it’s liberating!