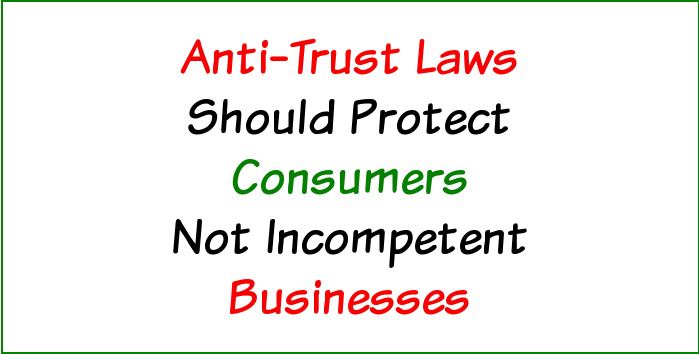 Competition And Fair Pricing
Are Alive And Well With Big Tech

Apple is being investigated in the EU, UK, and the USA regarding anti-trust rules. Investigators are focused on Apple’s App platform, motivated specifically by the allegation that Apple manipulates the platform to reduce competition with apps developed by Apple. The biggest (but not the only) complaint behind the allegation comes from Spotify.

A second developer, Epic, is stirring the pot with the same complaint. Now that they have gained momentum, they no longer want to pay for the right to sell on the store. Apple gets 30% of the first year’s subscription price. Developers agree to this upfront and then when they gain traction, it hurts losing all that money to Apple.

The reading gets a bit thick at times but I found Apple’s response to Spotify thought-provoking.

I can see both sides but lean heavily toward Apple. Both complaints come from industry hefties whose growth was made possible by the Apple gateway.

And it’s true. Apple offers a great option for developers to get their brand before the public. The fees associated with being in the store are agreed to upfront and the rules are clear. At this point, the suit seems like a “he said, she said” sort of scenario but hopefully, the angst will be sorted soon and the rest of us can get on with life.

Apple, of course, is just one of several being targeted by Anti-Trust investigations. Google, Amazon, and Facebook are all under pressure.

Personally, I don’t use Facebook much but many people do, not only for social benefit but for business promotion also. All these companies serve useful purposes that benefit a large number of people.

Data indicates that 197 million people worldwide visit Amazon every month. More than one billion people use Google’s products and services. And Facebook has roughly 2.8 billion active users every month, more than a third of the world’s population. I might add that many of the people using Facebook, Google and Apple are in third world cultures. The benefit is astounding.

CORRECTION: I was recently notified by a “good neighbor” from FRACTL that the numbers have radically changed. Instead of 197 million, Amazon now boasts 2.7 billion monthly searches as of the end of 2021. You can find many other very interesting numbers for Amazon’s amazing growth at CouponFollow.

Personally, I do use Amazon, a lot, and Google, and I’m writing this post using my trusted Apple desktop computer which I consider one of my primary tools for daily productivity. I used PC’s for years before converting but now I can’t imagine anything but Apple.

Sorry, Mr. Gates. I mean no insult. You brought personal computing to the world and I can’t say how much that changed my life so you’re among the heroes too.

I’m not alone, though. In fact, I would venture to guess that the investigators are probably using Apple devices of one kind or another to write their reports and more than likely employing Google search to access data all while munching on snacks they ordered from Amazon. And, of course, keeping in touch through Facebook or one of many varied social apps offered on Apple.

All this information begs the question. Where do you draw the line between public benefit and anti-trust? Anti-trust laws were originally created to prevent big players from strong-arming small competitors out of existence which, in turn, created a pricing free-for-all far worse than price-fixing. With no competitors and high demand, business owners could literally name their price and no one could do anything about it.

What that means is anti-trust was originally designed to protect consumers. Competition was the point, not business opportunities.

No one is getting a free pass. The big guys are constantly duking it out and that keeps everyone humble.

Big Tech Encourages Competition And Fair Prices Down The Line

Big Tech also provides healthy competition and fair pricing for businesses using their platforms. Amazon, Google, Apple, and even Facebook feed meritocracy, and that in turn benefits the public more than legislation ever could. Through these services I’ve found and purchased goods from many companies I would never have heard of otherwise.

If you have a great product or service and you wish to promote it, all these platforms offer you the greatest exposure. If you don’t like what they offer, fair enough. Go it on your own.

There are literally hundreds of thousands of businesses in very diverse categories ranging from individuals to massive corporations taking advantage of the opportunities these platforms provide.

If you want to sell widgets out of your garage, like Jeff Besos did when he started, go for it. The door is wide open. You may or may not succeed but you never know until you try. Big tech makes trying possible.

I’m an author. I have two books listed on Amazon. In ten years, only 833 copies of my books have made it into circulation. That’s far less than the 100,000 I was aiming for. I advertised on Facebook and Google and followed the promotional guidelines on Amazon. I believe I even listed the book on Apple services but I still haven’t reached my goal.

Who do I blame for that?

I can’t blame Amazon or Google or Apple or Facebook. These platforms have made it possible for me to even try to succeed. Regardless the less than optimum result, I am elated that I was able to publish and that the books are still available.

I love using the services these platforms provide. I’m all for anti-trust but any legislation that reduces the effectiveness of these platforms or my access to them will be viewed as unnecessary government intrusion. The problem here is not big government. The problem is using power in the wrong way, a way that hurts the individual more than it helps.

Regulators beware. The next election cycle is looming.