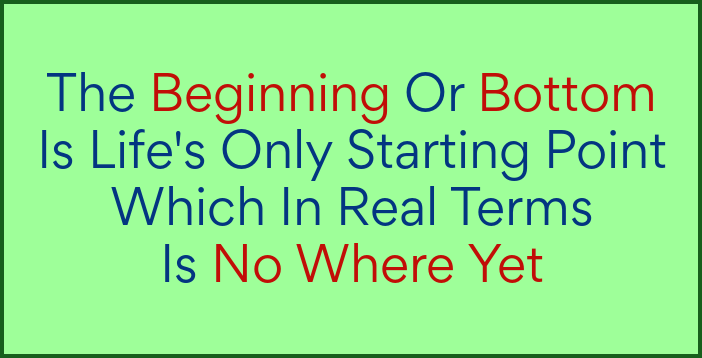 The pertinent details of Moses’ life are well documented in the Bible. Thankfully, it doesn’t include his entire bio. Just the important details.

Moses lived long enough (120 years) that a full-length bio would arguably be longer than the Bible and that length would make it difficult to isolate important lessons.

Instead, his life is divided neatly into three separate stages of 40 years each and only the most important details from each stage are included. The first two stages provide very little detail but it’s enough to gain important insights.

Before we get into the lessons, let’s look at the details of the first stage in broad strokes.

STAGE ONE: THE DEVELOPMENT STAGE
(Infancy to adulthood in Pharaoh’s house, Exodus 2:1-10).

The Book of Exodus only provides ten verses on this stage but several lessons emerge.

Growth Is The Only Option

The first stage of life for everyone is the growing stage or to put it differently, the stage at which people tend to balk. Growth starts on day one. It’s the only option but we generally find it uncomfortable.

People want to be grown but they don’t enjoy the process of growing.

They want to be well informed but that achievement requires hard work, the kind we tend to avoid.

No one starts at the end.

The beginning, or the bottom, is the only starting point, which in real terms is nowhere yet.

Opportunities To Grow Must Be Seized

Opportunities to grow are not always available but when they are, they must be seized. Opportunities are either engaged or wasted. There’s no in-between.

For Moses, the situation was about as bad as it could be. He started below the bottom. To say he was disadvantaged would be an understatement.

Pharoah had enslaved his Jewish countrymen to stop their population growth but in spite of the slavery, they continued to grow.

Not to be deterred, Pharaoh then resorted to infanticide, demanding the death of all male-born children. That’s when Moses was born.

Growth Should Be Facilitated By Parents

Parents don’t teach their kids everything for two simple reasons. They have neither the time nor the expertise to do so. Some don’t even have the inclination.

Can you imagine Moses’ Mom teaching him how to wield a sword?

Moses faced an impossible situation but the good news is he didn’t just survive, he flourished and it was all because of his mother’s courageously devised plan.

That’s what parents do. They step into the gaps to make sure their kids are provided opportunities they otherwise wouldn’t have.

In Moses’ case, he only had two options: A dead-end or the deep end. It was either death by decree of Pharaoh or tutelage at the hand of Pharaoh. We know where Moses landed.

His mother, Jochebed (Exodus 6:20), isn’t mentioned often but her plan not only kept him alive it also advanced his future prospects.

As a result of Jochebed’s inventive efforts, Moses was adopted by Pharaoh’s daughter, taken into the house of Pharaoh (the lap of luxury), trained in all the wisdom of Egypt (Acts 7:22), and tradition tells us he was an effective military leader with notable exploits.

You could say that everything Moses did was a tribute to Jochebed’s faith and courage (Hebrews 11:23).

How many kids can say their parents did that for them?

Growth Qualified Him To Do God’s Will

Moses’ adoption by Pharaoh’s daughter gave him options that few people had. The opportunity wasn’t wasted on Moses.

The most significant observation is not in the detail but in the outcome. He learned, developed, and accomplished things.

He not only learned in the sense of gaining information/understanding, he learned how to learn.

Learning never stops and the skills that enable us to learn are always needed. The person that knows how to learn will always be in high demand.

At the end of his first forty years, Moses was mentally astute, verbally articulate, and physically capable, but more importantly, he developed the skills and resourcefulness to handle unforeseen problems as they arose.

Moses became the kind of person who could capably lead Israel into a new era and to a new location, a journey fraught with perils and unknowns.

A homeless person couldn’t do this.

An illiterate person would struggle to lead a nation.

Moses was born at the same level as everyone else. He had potential but no capabilities to speak of. But He applied himself and became the person God needed him to be.

Moses was called to lead Israel into nationhood. He was chosen to do the job because he did the hard work of qualifying.

If he hadn’t learned to read, write, communicate, and strategize, (a boringly repetitive process) how could he have stood before Pharaoh or led an entire nation through an unheard-of geographical transition or be the greatest lawgiver ever?

Without the development that took place during the first forty years, Moses would have never qualified as God’s man for the last forty.

Nowadays personal development is not seen as an important issue. It seems silly to say it but you get the impression that most aren’t worried too much about reading and writing. As long as you want to serve God, that’s good enough.

I’m not sure Moses would agree.

The development stage is important because, without it, you won’t be shortlisted for any significant jobs.