Competition And Fair Pricing
Are Alive And Well With Big Tech

Apple is being investigated in the EU, UK, and the USA regarding anti-trust rules. Investigators are focused on Apple’s App platform, motivated specifically by the allegation that Apple manipulates the platform to reduce competition with apps developed by Apple. The biggest (but not the only) complaint behind the allegation comes from Spotify.

A second developer, Epic, is stirring the pot with the same complaint. Now that they have gained momentum, they no longer want to pay for the right to sell on the store. Apple gets 30% of the first year’s subscription price. Developers agree to this upfront and then when they gain traction, it hurts losing all that money to Apple.

The reading gets a bit thick at times but I found Apple’s response to Spotify thought-provoking.

I can see both sides but lean heavily toward Apple. Both complaints come from industry hefties whose growth was made possible by the Apple gateway.

And it’s true. Apple offers a great option for developers to get their brand before the public. The fees associated with being in the store are agreed to upfront and the rules are clear. At this point, the suit seems like a “he said, she said” sort of scenario but hopefully, the angst will be sorted soon and the rest of us can get on with life.

Apple, of course, is just one of several being targeted by Anti-Trust investigations. Google, Amazon, and Facebook are all under pressure.

Personally, I don’t use Facebook much but many people do, not only for social benefit but for business promotion also. All these companies serve useful purposes that benefit a large number of people.

Data indicates that 197 million people worldwide visit Amazon every month. More than one billion people use Google’s products and services. And Facebook has roughly 2.8 billion active users every month, more than a third of the world’s population. I might add that many of the people using Facebook, Google and Apple are in third world cultures. The benefit is astounding.

CORRECTION: I was recently notified by a “good neighbor” from FRACTL that the numbers have radically changed. Instead of 197 million, Amazon now boasts 2.7 billion monthly searches as of the end of 2021. You can find many other very interesting numbers for Amazon’s amazing growth at CouponFollow.

Personally, I do use Amazon, a lot, and Google, and I’m writing this post using my trusted Apple desktop computer which I consider one of my primary tools for daily productivity. I used PC’s for years before converting but now I can’t imagine anything but Apple.

Sorry, Mr. Gates. I mean no insult. You brought personal computing to the world and I can’t say how much that changed my life so you’re among the heroes too.

I’m not alone, though. In fact, I would venture to guess that the investigators are probably using Apple devices of one kind or another to write their reports and more than likely employing Google search to access data all while munching on snacks they ordered from Amazon. And, of course, keeping in touch through Facebook or one of many varied social apps offered on Apple. END_OF_DOCUMENT_TOKEN_TO_BE_REPLACED

Great Doctors Are No Better
Than The Staff
Who Surround Them

I doubt anyone includes hospitals in their top ten list of most desirable places to visit but whether by accident or pre-planning, it is a visit everyone makes, probably more than once.

Not counting my birthday, I’ve been in the hospital six times myself and I’m neither sickly nor accident prone. Hospital visits happen quite normally. It’s inevitable so it only makes sense to know your hospitals before you go.

That isn’t a choice we usually make but maybe it should be.

When looking for good medical care, most begin by asking folks to recommend doctors. It’s not a bad plan but that It isn’t the best strategy.

GP’s and specialists are usually attached to a hospital. If you need hospital care, it will be done in whichever hospital the doctor is contracted with. Once you’ve picked your doctor, you’re locked in which means choosing a doctor is choosing a hospital. They come together as a package so you might ask about hospitals as well as doctors when investigating.

After experience with a few different hospitals, I now ask for doctors who have excellent reviews and who work in hospitals with the same reputation. A doctor, any doctor, can be great but their performance is no better than the staff who surround him or her and hospitals, like doctors, aren’t all equal.

One procedure, even a minor procedure, involves many people and processes. All you need is one weak link and you have a formula for undesirable outcomes.

When weak links are apparent, it is scary to watch. And you’re witnessing the whole thing except when you’re out.

I’ve used two hospitals over the past year. One, Umhlanga Rocks Hospital, I’ve been in three different times. The other, Gateway Private Hospital, I visited just a few days ago for vascular surgery and what a difference. The experience at Gateway gave me some interesting insights and spurred me to write this comparison.

The two hospitals are so close geographically you could throw a stone from one and almost hit the other. But geography is the only metric in which they are close.

Gateway is relatively new so in the early days, Umhlanga was the closest hospital for folks in our area. It made logistical sense to go there.

Some Things
Should Be
Automatic

I spent time in the hospital recently. It was short. Only one night, but it gave me perspective on what should or shouldn’t happen in a hospital. I walked away a little wiser and thought I would share the lessons learned.

I’m not a doctor, nurse or hospital technician so this is not intended as medical advice. I’m speaking as a patient and you don’t need any qualifications to be a patient.

My sinuses were blocked and had been for a very long time. The solution was to remove polyps and, of course, reconstruct the septum. The procedure is done under general anesthetic but is considered minor surgery. Many people go home the same day, but in my case, the infection/blockage was worse than the scans indicated and my nasal/sinus passages weren’t easy to navigate which means the op took a little longer and was more invasive than usual.

Make no mistake, though, major or not this op is personal. Proverbially speaking, it’s in your face. END_OF_DOCUMENT_TOKEN_TO_BE_REPLACED 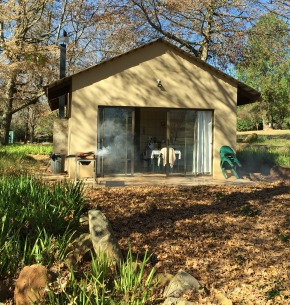 Before visiting the Central Berg in May 2016, we asked friends for recommendations on where to stay and Berghaven Holiday Cottages was mentioned. I also searched online and discovered it was very competitively priced.

In the category of self catering accommodations, I can’t say Berghaven is the best but we discovered a few particulars that definitely make it an attractive choice. END_OF_DOCUMENT_TOKEN_TO_BE_REPLACED 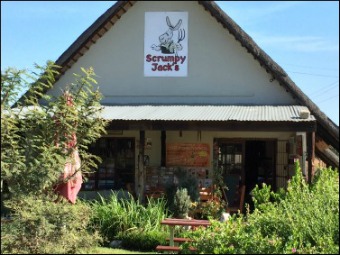 Easy To Find
Hard To Leave

Literally! You can’t miss Scrumpy Jack’s. It fronts on the road and sits on a hill.

It’s also on the way to just about anywhere you’re going in the Central Drakensberg (7 kilometres south of the Thokozisa information centre on the R600, opposite the turn off to the Ardmore Guest Farm, just after the entrance to The Nest if you’re headed south).

What that long winded description means is it’s right in the middle of anywhere you want to be in the Central Berg. 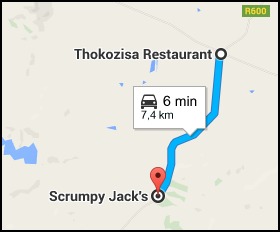 But the visibility and easy access aren’t the most important bits of information.

I wouldn’t say this shop has everything – no shop does – but it has a very diverse and personalized assortment of offerings: Bee tours, pony rides, a cafe and more. It even has a pet pig named Porky who lazily – sometimes snoringly – welcomes all visitors to the shop. 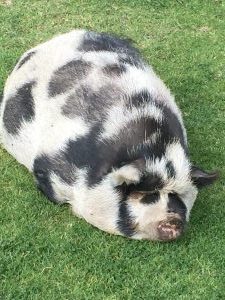 The shop has a range of delectables to browse and buy: chocolates, nougat, nuts, biltong, jams, brittles, biscuits, teas, coffees and hot chocolate to name a few. I even noticed corn chips and a cool drink cooler.

If you’re snackish or ready for a meal, no worries. Seating is available and they offer puddings or light meals with hot or cold drinks to order.

But there’s more. This is not just another been-there-done-that tourist shop. What makes Scrumpy Jack’s unique are the high quality, locally produced and packaged products that you’ll rarely find any where else. END_OF_DOCUMENT_TOKEN_TO_BE_REPLACED