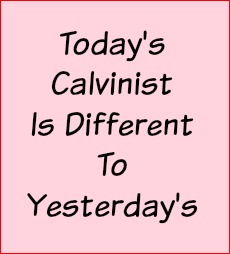 Either/Or
Neither/Nor
What Are You
Going To Be

I consider myself neither Calvinist nor Arminian but rather a mix of the two. I don’t mean to sound uncommitted or indecisive when I say that.

It’s just difficult for me to think any person could really side completely with either.

And the two ideas vary a lot.

I doubt any person in either camp today is exactly what the forebears of either belief were in the past. Which, of course, means that if you say you are a Calvinist now, you will be differing with Calvinists of yesteryear.

As things move forward, and we think more deeply about our beliefs, perspective changes.

The same could be said of Arminians but does anyone ever talk about Arminianism. Other than Calvinists.

Of the two ideas, the one most talked about, studied, explained and argued over is Calvinism. Everyone joins in that conversation. Arminianism, however, gets most of it’s attention from Calvinists.

So, I decided to put together a comparison of the two. Don’t get upset though. No insult is intended. The following list of comparisons is not exhaustive and is written in the spirit of fun and humor. END_OF_DOCUMENT_TOKEN_TO_BE_REPLACED 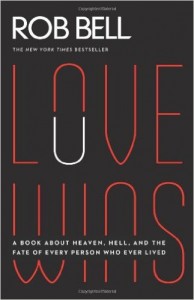 Is Bell’s Universalism
Worse Than Calvin’s?

recently hit the market, or maybe I should say the fan, based on the maelstrom that followed. It’s really making people think.

Not “believe” but think and I’m certain that’s a good thing. Only a thinking person can believe, right?

Even before the book was released the flurry of accusations, disavowals and condemnations – proclaimed, of course, with “hear I stand” affirmations of Rob’s unquestionable infidelity – made one think the anti-Christ had surely arrived. And these responses were based on nothing more than a pre-release video ad.

The ad was provocative, yes, but not the basis for laying criminal charges.

That didn’t matter though. With little evidence and no identifiable crime, stake burning mobs began gathering.

And after the release? Whooooooooooa! The barrage of heated acrimonious remarks was enough to melt glaciers.

I try to avoid universal everybody’s-doing-it statements but it definitely seems like “everyone” took aim at Rob. For all the right reasons, naturally. I don’t doubt a few hangers-on will keep the firestorm fueled for some time to come.

The question is how do you make sense of all the noise?

Providing a list of every naysayer or attempting to analyze every contrary remark would take an endless amount of time so I won’t go there. I will, however, focus on one review for discussion purposes. The writer is Kevin DeYoung who is reformed (lower case “r” for me – talk more about that just now). His remarks are representative of the negative reactions so he is a good place to start.

His first response – I feel more might be coming – was posted on The Gospel Coalition and I will excerpt a few remarks to illustrate the presumptuous ranting manner in which Bell’s ideas are being attacked.

My purpose, by the way, is not to encourage anyone to agree or disagree with Bell or DeYoung. These two men don’t represent the opposite ends of the good vs evil spectrum. Thankfully, one isn’t absolutely right and the other absolutely wrong.

There are more than just two possible conclusions and according to what Bell said in the book he understands that. The problem is DeYoung doesn’t. He and those like him allow for no divergence on certain ideas and assume Bell must be “completely” wrong because he opened up discussion on ideas that are “absolutely” fixed. Like so many others, his write-up is laced with the language of assumed-understandings from beginning to end.

His title reads: “God Is Still Holy And What You Learned In Sunday School Is Still True…”

And to mimic Rob’s approach to such absolutist remarks…

Let’s be clear. From what I understand some of those Sunday schools agree with Bell.

Truth? DeYoung, like so many others, speaks from a very narrow, near history perspective – mostly opinion – and quotes people who endorse that perspective. I’m being generous to call it perspective, a word that implies a long broad view.

His introduction provides a very generalized, hazy rendering of Rob’s primary point and includes a summary of his accusations, on which he expands in the interminably long exposé that follows:

The theology is heterodox. The history is inaccurate. The impact on souls is devastating. And the use of Scripture is indefensible.

I’ll talk more about it later but for the record, long winded statements are typical of reformed teachers and there is good reason for it. The heart of their teachings is so irrational, illogical and flaky they resort to long drawn out twist-and-turn, hard-to-follow discussions just to give the appearance of intellectual superiority. Taking this approach diverts attention from their senseless confusion to what seems to be excessive cerebral activity.

Who can argue against that?

However, not only is the good news better than that, as Rob would say, it really isn’t so complicated either.

DeYoung repeats or alludes to his accusation points ad nauseam throughout the article but only as assertions. Any proof he offers is from people whose opinions mirror his. At one point he says:

If Bell is right, then historic orthodoxy is toxic and terrible. But if the traditional view of heaven and hell are right, Bell is blaspheming. I do not use the word lightly, just like Bell probably chose “toxic” quite deliberately. Both sides cannot be right.

“Blaspheme” doesn’t really apply anyway. We use it to characterize actions or words intended to impugn God’s name or affront His person. Bell might be attacking ideas but he clearly isn’t defying God. He believes the Bible and works from it not around it. However, in the heat of the moment, with so many egging him on, how could DeYoung resist.

The history DeYoung learned, which he assures us Bell got wrong, is an interpretation sanitized by the religious institutions of the American west, which not only trained him but continually monitor his acceptance.

Does anyone who knows how the system works think he can be entirely honest? Even publicly considering a different – not new – idea, would immediately trigger disbarment proceedings. His (their) interpretations of history and the Bible are “inspired” and therefore set. There is no room for discussion.

But, for me, here is the real issue. DeYoung is a dedicated “calvinist.” So dedicated in fact that his seminary peers referred to him as Calvin’s clone.

For those who may not be aware of it, calvinism – not the Bible – teaches that God preselected certain individuals to go to heaven while assigning everyone else to hell and these selections were made before the universe was created. In case you didn’t know, “calvinism” is slang for “reformed.” END_OF_DOCUMENT_TOKEN_TO_BE_REPLACED 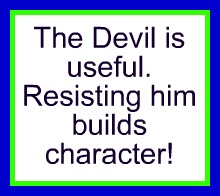 If God is so powerful…how does the Devil exist?

This question was originally posed by an agnostic/atheist type (Agath) and sent to me by a Christian friend but it’s a little bit confusing. No explanation was offered so you have to analyze it a bit to get a handle on what is really being asked.

After reading the question, my first thought was, “why shouldn’t the Devil exist?” I know he’s not the nicest guy around and I don’t like him any more than the next person but does that constitute a reason to X him out?

And, yes, God does have the power to dispose of him but if God were to annihilate him, who else should He blot out and by what rule would He decide who goes and who stays? Should I expect Him to eliminate every person I don’t particularly like?

Quite honestly, I’ve never met the Devil or tangled with him directly – at least not that I know of – but I could give you a long list of people who have aggravated me to no end. What about them? Should they be on the death list also?

Aside from personal issues, however, what other reasons could justify the Devil’s elimination? Should we expect God to blot out any person who does wrong and, if so, aren’t we all in danger? No one is entirely without sin so everyone could be on the list. Solomon said…

“There is not a just man upon earth that does good and sins not.” (Ecclesiastes 7:20)

And only an argumentative or delusional soul would disagree with that point.

So the next question is, would we expect God to exterminate only those who commit particularly egregious crimes and, if so, who gets to decide where acceptable crimes end and egregious ones begin?

Obviously, Agath’s original question spawns many more sub queries making it difficult to fully resolve the issue. Maybe before we demand God eliminate the Devil’s miserable soul we should take a look at what the Bible actually says him. And the first observation to note is… END_OF_DOCUMENT_TOKEN_TO_BE_REPLACED 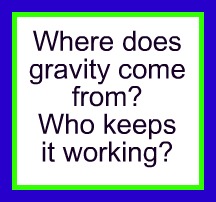 A friend recently sent me an email posing an assortment of questions about miracles. The questions originally came from an agnostic/atheist type (Agath) – my friend is neither – and were intended to discredit God and belittle believers.

A summary of each question is included for your reference. I summarized them because unedited they were quite long but I was careful to retain the essence:

I can’t say whether Agath is genuinely open to real answers or not but he apparently won’t accept fluff. According to my friend “God works in mysterious ways” won’t do, hence this post.

I’ll discuss only the first two questions in this article. The others will come later but since the first two are closely related and Agath offered an answer for each they seemed like a good place to start. END_OF_DOCUMENT_TOKEN_TO_BE_REPLACED 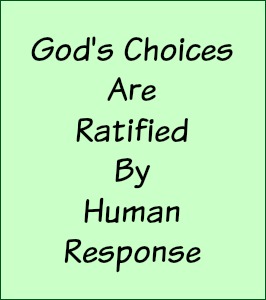 Unfortunately, God’s dealings with Jacob and Esau are often used to bolster the claims of Calvinism, the idea that God elects certain people for salvation and sends everyone else to hell. Admittedly, God made three very interesting statements relative to these two men that on the surface seem to support a Calvinistic view.

This post, however, is written in an effort to rethink Jacob and Esau and offer a different perspective. It isn’t a final answer on God’s sovereignty but is a different interpretation on these two fellows and God’s relationship to them.

It is my contention that the names “Jacob” and “Esau” were used, in most cases, as references to nations not individuals. In other words, the name of the person, Jacob, is used to represent his posterity, Israel.

And this isn’t just my opinion. Interchanging related words in this manner is a well accepted rhetorical device – otherwise known as metonymy – which is often used in the Bible. Most references to “Jacob” and “Esau” are references to their descendants and that is particularly true in Romans 9.

Figures of speech aside, however, you don’t have to be grammatically astute to recognize that any direct statement to or about “Jacob,” after the death of the man, in every case is a reference to his descendants.

Most references fall into that category. The conversation with/about Jacob and Esau lasted almost two millennia. Obviously, most of what God had to say was said after they were dead.

What that means is God’s choice of and discussions about Jacob or Esau was national. It was focused on the larger picture. He was choosing a community, a nation to work with. He was selecting Jacob’s posterity not just Jacob and this choice had nothing to do with personal, individual salvation.

Now, with that understanding in mind let’s note some facts and make some general observations about the Romans 9 passage.

God made the following critical statements:

Although all three statements were repeated in Romans 9 they were originally recorded in the Old Testament and were separated by hundreds of years.

Paul added some explanatory remarks to these statements which seem to further endorse Calvinistic ideas:

Everyone admits these statements were made in the context of Romans 9. Not everyone accepts the Calvinistic interpretation imposed on them. I offer the following arguments as the basis for a different opinion. END_OF_DOCUMENT_TOKEN_TO_BE_REPLACED