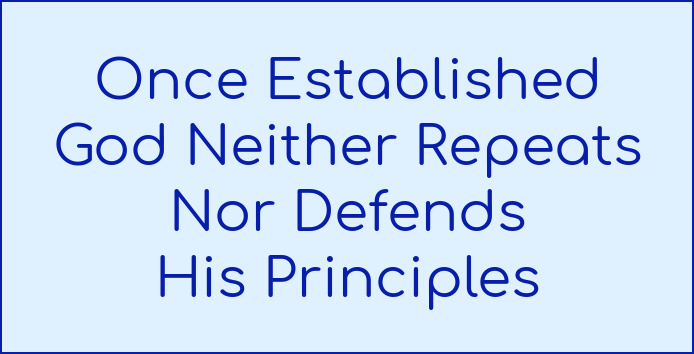 Abraham is usually recognized as the founding leader of the Jewish religion and he definitely was one of the more prominent contributors. The interesting thing is, much of what he did religiously he received from his ancestors and, other than Abraham’s descendants being selected as the guardians of God’s revelation, there were only two new developments in this religion during his lifetime.

He didn’t wear different clothes or “move his affiliation” or modify his diet. The only additions were:

Taken together, these additions don’t add up to massive religious changes but both were an inconvenience to Abraham, especially the land issue. It was a constant source of irritation.

On a religious level, not much changed during his life but on a personal level, his world was turned upside down.

Admittedly, choosing Canaan as the future home of Israel was significant to us but for Abraham it wasn’t very gratifying. Through much of history it was identified with his descendants but Abraham never owned any of the land other than the cave in which he buried Sara and living in Canaan was not a treat for him or his family. The spiritual environment and most of the residents were a constant source of grief.

To follow God, Abraham made many personal sacrifices with few positive outcomes to validate his troubles. When he died, the religion was still barely noticeable and his family was divided. So, we must ask, how did Abraham know with certainty he was where God wanted him to be? How did God direct him in the first place and how did God encourage him to endure these troubles?

In order to appreciate his sacrifices you need to know the problems he faced.

To start, he traveled hundreds of miles from Ur to Haran and then a further 400+ miles from Haran to Canaan, a place he had never been and about which he knew nothing. He didn’t even know where he was going when he started.

To say this journey was “comfort challenged” is an understatement. There was no “modern” means of transport and he traveled with his family, a large number of servants and a large number of animals all of whom had to be fed and protected. They were large enough to be a small city. Moving across town would have been difficult. A distance of several hundred miles required a level of dedication and commitment that is rare. In Abraham’s case it also required an unusually strong sense of faith.

Abraham’s family situation was often discouraging. Being childless, Sara lived in a state of disappointment which was only compounded by Abraham’s desire for children. Sara went along with his ill advised plans, in an attempt to be supportive, but she got little in return from her husband. When she suggested he have children with her servant, Hagar, he complied immediately not realizing the suggestion was only a cry for affirmation. He lived with that mistake for many years to come. We’re still living with it today.

His marriage wasn’t the only source of relationship pain. Abraham’s father died in Haran and his nephew, Lot, fought with him over rights to grazing land in Canaan. Eventually the two separated never to be restored. The rest of his family stayed behind. He never saw them again.

Even though Abraham’s “household” was large (his personal militia included at least 318 men) he never got established in the land. He was nomadic. He gave the appearance of being unsettled, even unstable. He moved several times within the land (on one occasion out of the land) and related to the locals only at a distance. “Untrusting” and “disconnected” would be the best words to describe his relationship with his neighbors. He was never close friends with anyone in the area.

When Abraham moved to Canaan it was a step down socially and culturally. He gave up everything when he left Ur: name, relationships, lands, influence and most of these things were never recovered in his lifetime. Many generations passed before any of his descendants took possession of the land. Even more generations passed before he was recognized for the greatness of his faith.

We are not being unreasonable to ask, “how did God communicate with this man?” How did He convince Abraham to go in the first place and how did He encourage him to stay once he arrived? On a technical level the answer is easy. He used spoken words, established principles of truth, circumstances and people to convey His message.

There were several times when God spoke audibly to Abraham over a span of at least 30 years:

These messages were specific and personal. They required a very direct means of communication, such as the audibly spoken word and the information is pertinent for us also.

Some would suggest that God still speaks in this way today. If so, then we would expect the message to be very personal and have huge implications for the greater population. That was the case with Abraham. We shouldn’t expect any less now.

We could say more about this but it isn’t the point of this post. We will leave it for later.

Abraham did many things in Canaan, which he no doubt had previously learned about in Ur. All of them were well represented in Bible history. God didn’t reteach these principles to Abraham but He did respond to Abraham’s observances of them. God’s response was His voice.

In fact, every time he moved within the land he built an altar as a matter of course. He also practiced tithing (Gen 14) which is a bloodless offering. God responded by recording these events for our benefit.

For the most part Abraham was civil toward the surrounding communities but he kept a safe distance. He interacted with them when necessary and was always fair but he was never “close” to any of them.

Abraham did commit adultery but not easily or without consequence. We are certain he understood monogamy or Sara wouldn’t have needed to suggest he have a child by Hagar.

The practice of having children by concubines was widespread in those days. It was a matter of protection. There is power in numbers. If Abraham didn’t live by a different standard, he and Sara would have adopted this practice long before they arrived in Canaan.

Abraham led the way in defeating a confederate army of five different kings only because he wanted to save Lot and his family from captivity. When the battle was over, he confidently and publicly refused any of the spoils, all of which were associated with Sodom.

The same man who was honest and courageous on one occasion also lied twice to different kings (dishonest). He did so to protect his life (cowardice) and he put Sara’s life in jeopardy when he did (selfish).

The truth is, Abraham made a lot of mistakes but he never gave up on himself or God. There was a thirteen year period, following the birth of Ishmael, during which God said nothing to Abraham. His relationship with Sara was strained during that time and he probably never touched Hagar again but he knew something about the grace that God gives. Instead of running he patiently waited.

In the story of Abraham, God never restated any of these principles. He never told Abraham to worship, offer sacrifices, be socially guarded or be monogamous. They were well established principles and God doesn’t repeat Himself. He doesn’t reteach each successive generation everything He established before.

Abraham was aware of these principles and when he failed, God was silent not noisy. Fortunately, even God’s grace was an established principle which sustained him through the failure. These are principles we can bank on even today.

We have much more Bible than Abraham and far less reason to need individualized instruction. Therefore, if you want God to speak to you, the best place to start is the written Word. The more Bible you read the more God you hear.

God Spoke Through Other People

Sometimes God used the consequences of Abraham’s actions to communicate with him. This happened more than once.

When Abraham lied, God spoke to the kings, in both cases, not Abraham. In return, the kings reprimanded Abraham publicly. They were echoing God’s sentiments. God didn’t need to say anything.

When Abraham committed adultery, God said nothing to anyone. Sara, however, had a lot to say. The friction was a constant reminder that adultery is a no-no. God needed to say nothing more.

There were two details in Abraham’s life that kept him off balance. One was living in the land without socially integrating and the second was having a child by Sara. The question for Abraham, in both cases, was not “did God speak,” but “did God mean what He said.” No one had received instruction more clearly or specifically than Abraham. The clearness of God’s communication was not the issue. Abraham’s ability to accept it was.

When he arrived in the land and experienced famine, he was confused. When he remained childless for years, especially after he arrived in the land he was frustrated. When Sara suggested he have a child by Hagar (doing what they knew was questionable) he was uncertain. But, through all of these situations Abraham learned that God not only speaks, He means exactly what He says.

Abraham lived a hundred years in Canaan and survived famines, family conflicts, war and God’s judgment on neighboring cities. All of those problems, however, were incidental. The real lesson for Abraham was learning to overcome his indecision.

Getting to Canaan was difficult. Staying there was even more difficult. His resolve was constantly tested. What we learn from his experience is not “how” God speaks to us but that He doesn’t repeat Himself and He really means what He says.

When God told Abraham to sacrifice Isaac, the Bible clearly says it was a test. A test of what? A test of his resolve to take God at His word. God never changed His instructions to Abraham but He did change Abraham’s ability to live with it.

For now, if you want to know what God is saying to you, read your Bible. Do what it says. THINK!AboutIt.