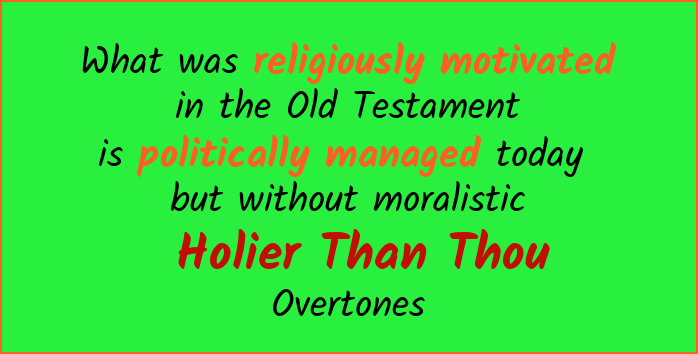 Most people think that religion can make a person better morally and bring them closer to God but that idea is far from true.  In fact, James said people who live a religious life and brag about it (bridle not their tongues) are delusional (James, chapter 1 verse 26).  According to James, a religious life is useful but not for moral improvement.

Take, for example, some of the religious regulations in the Old Testament and there were many.  Diet, food preparation, sewer management, dress code, work-rest cycle (time management), charitable practices, financial management, personal hygiene and medical procedures were all included in the religious code.  When James mentioned religion this is what he was referring to.

All of these principles are still commonly observed today, one way or another, in every civilized community. We wash our hands regularly, maintain elaborate sewer systems and legislate restrictions for many aspects of everyday life: food processing, food service, medical qualifications and practice, financial transactions and investments, labor laws and we even encourage people to practice good personal hygiene without becoming obsessive.

The “five second rule” means you can still eat something that has fallen on the floor as long as it hasn’t been there for more than five seconds.  Personally, if it touches the floor I put it in the bin but I don’t look down on, ridicule or think poorly of those who do otherwise.

These practices are sometimes motivated by spiritual institutions, which enumerate them in minute detail.  At other times, political institutions regulate them but, at all times, they stem from Old Testament religious law.  You could say that a civilized democratic community is a religious one.

But, here is the point.  Religious legislation doesn’t make you a holy Joe.  What was religiously motivated in the Old Testament is politically managed today but without moralistic, “holier than thou” overtones. We are not more spiritual today because we have sewer systems than the Israelites were for keeping human waste outside the confines of human traffic.

There are many people who don’t believe in God and have no use for churches but they are religious; they use toilets, wash their hands and eat only food that is not spoiled and so on.  That makes them healthy biologically not spiritual.  These practices do not bring anyone closer to God or make them more God like.  Hitler did many of these things.  We don’t think of him as moral.

Sadly, religious code is constantly expanding.  Once we get used to one set of statutes we add more as a way of keeping the faithful tried and tested.  What we do today makes Moses look like a legal simpleton.

The Mormons don’t allow coffee, the Jehovah Witnesses don’t allow blood transfusions, the Amish wear no buttons (ornaments) and only use horse drawn carts for transport, many religions disallow or discourage contraception, many disallow divorce and the list goes on.  Eventually the rules become more the object of worship and less the general guidelines for living.  In the New Testament Jesus corrected this tendency when He said, “the Sabbath was made for man, not man for the Sabbath” (Mark chapter 2 verse 27).

So, what is the point of religion if all these things don’t make a real spiritual difference?  What is the evidence that genuine religion has been fully exercised?  Well, James answers this question also.

After stating that religion can be quite useless for improving your spiritual character he goes on to describe the outcomes of a person who is religious in the right way and there are only two:  one, people will be helped (orphans and widows particularly) and two, you will remain free from the corruptions of the world (James chapter 1 verse 27).

If you wish to be genuinely spiritual you will have to do more than wash your hands, use a toilet and attend a church service every now and again.  You will have to engage in meeting the needy where they are and providing the necessary support.  Even remaining free of the world’s pollutions is self-serving if you don’t find a way to help the desperate.

One last thought.  For those who are religiously well practiced and feel very comfortable with their achievement you still lack one thing.  Jesus told one of the most religious men of His day, Nicodemus, he needed to be born again.  Nicodemus was better than most religiously but nowhere spiritually.  It was in the context of a conversation with him that Jesus made His well know statement:

For God so loved the world, that he gave his only begotten Son, that whosoever believes in him should not perish, but have everlasting life. ( John 3:16)

Are you religious?  That’s nice.  Are you born again?  That’s imperative.