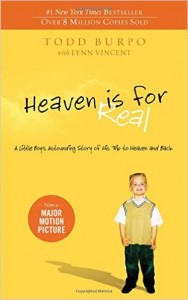 Whatever You Expect After Death
Requires Faith

Some people don’t accept heaven as a reality. They have never seen it, touched it or visited so they reject the idea.

But, the reality of heaven is not based on personal experience. Like the outer edge of the universe, a place no one has seen or visited, there is good reason to believe it exists. I’ve never been to either place but I have no doubt they are real.

And just like places closer to home, e.g., the north and south poles or the top of Mt. Everest, I have never been to or touched these places but I do believe the people who’ve been there and taken the pics.

Well, heaven is just like these locations. I haven’t been there yet either but others have and some have told us about it. The most recent case was four year old Colton Burpo whose story was told in Heaven Is For Real

. Colton told the story and his father, Todd, did the writing.

Colton, however, wasn’t the first to talk about visiting heaven. The Bible mentions several who had similar experiences:

Going further back in history, the Old Testament tells us:

So the concept is well established in the Bible and even though it is referred to as the third heaven – the first one being earth’s atmosphere and the second outer space – it obviously is very near. Some have crossed over and come back and several more have seen it.

Heaven is described as having physical dimensions but its proximity isn’t calculated only in geographical terms or hard measurements. It’s much closer than you might think.

But here is the question. Why will we believe the testimony of people who have been to the north and south poles and to the moon but we will not accept the testimony of Jesus, John and Paul along with others in the Bible and countless others since, regarding heaven?

For the disbelieving, heaven becomes nothing more than an idea, feeling, attitude, mindset or anything that numbs the pain of life and anyone who says they have been there is labeled weak minded, unstable, demented or psychotic.

Well, the Bible actually teaches that heaven is a very real and literal place and that God dwells there. And the countless testimonies of individuals in and out of the Bible who say they have seen it are good reasons to consider heaven to be more than a figment.

The word “heaven” is used almost 700 times in the Bible and is found in 20 different books in the New Testament. That constitutes very broad coverage if the place isn’t real and the implications are quite serious. If heaven is not a reality most of the New Testament is a lie and we have good reason to throw the whole thing out.

Further, not only does the New Testament make many references to heaven, half of those references were made by Jesus. In the Sermon on the Mount alone, Jesus referred to heaven in very literal terms over 12 different times.

If heaven is not a reality Jesus is either an outright liar or raging lunatic or both. In Matthew 5:12 He said…

Rejoice when you are persecuted (among men here on earth) because great is your reward in heaven.

Jesus made it very obvious that in His thinking earth was one place and heaven was another. And He also made it clear that the two are closely connected. What happens in one place will determine what happens in the other.

And, by the way, He didn’t say heaven was your reward. He said your heaven is where you’ll find it.

Attempting to work your way to heaven means you’re missing the point. Heaven is God’s free gift. The work you do here may earn you rewards in heaven but relying on anything other than the mercy, grace and sacrifice of Christ to get there is a waste of time and energy. An insult to God, really. Jesus paid the way, we only need embrace Him to get there.

Trying to work your way to heaven doesn’t make you a bad person but it does mean you have taken a wrong turn. Jesus said, “I am the way to the Father.” Accept that.

But, enough of that for now. Jesus repeatedly indicated that heaven is technically the place God resides. Consider the following:

Let your light so shine before men (i.e., here on earth), that they may see your good works, and glorify your father which is in heaven. Matt. 5:16

Jesus made it very clear that man dwells on earth, God dwells in heaven and there is a close connection between the two places.

And our prayer should be…

If heaven were nothing more than a state of mind these teachings would make no sense at all.

We shouldn’t be surprised or dismissive when the odd person gets a glimpse of heaven and lives to tell us about it. Heaven is the dwelling place of God and if God – who dwells in heaven – isn’t far from any one of us, then we can believe heaven isn’t so far off either.

In fact, Heaven is the primary reality. It existed before earth (eternally, actually) and even though we were created to live on earth, we – and earth – were patterned after heaven. You could say that earth is the reflection of heaven’s reality.

Even the Old Testament Tabernacle is said to be a copy of the real one in heaven.

We shouldn’t think it strange when heaven spills over into this life through some individual who has a near death experience (NDE). I wouldn’t encourage you to dwell on it or try to find a way of visiting whenever you wish but heaven is real enough and close enough to bleed through on the odd occasion. We should expect it!

For these reasons, we can’t help but find Colton Burpo’s NDE compelling. Not so much because it provides new revelation but because of the manner in which it comes to the surface. He shares unsolicited details of his experience, which couldn’t be known had he not been to heaven.

His story reveals nothing we didn’t believe already but it does confirm what the Bible says about heaven. It can’t be disregarded.

Colton’s experience is one of God’s gentle reminders that heaven is real and we really should take it seriously. Go here for a complete review of Colton’s book.

By the way, other statements in the Bible lead us to understand that heaven will have:

No hatred, no heresy, no compromise, no misunderstandings, no wars (conflict), no grief, no murder, no theft, no locks or alarms, no sickness, no disease, no hospitals, no physical pain, no emotional turbulence, no confusion, no disappointment, no anxiety or depression, no frustration, no facades, no aging, no sin, no guilt, no pollution, no shortages of food or water, no stress and no pressure.

Hard to imagine, I know, but the other choices – all of which require even more faith – are far less appealing.

You can get Colton’s book inexpensively here

And tell us what you THINK!AboutIt.