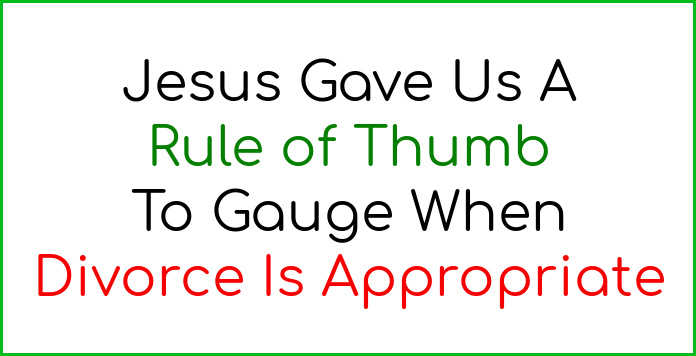 Was Jesus Writing
A New Rule
Or Confirming An Existing One?

In the Sermon on the Mount Jesus made some very interesting remarks about divorce:

And by these remarks He threw everyone into a tailspin. Or at least it seems that way judging from the many diverse – and bizarre – interpretations imposed on the text.

Not A New Rule

Many people treat His statement like a completely new and inflexible rule that was intended to draw an indelible line in the sand, and anyone crossing the line is eternally doomed. But this can’t be the correct understanding.

Jesus was clarifying an Old Testament statute not writing a new one and the clarification represents no modification on the original ruling which, by the way, was quite liberal. You can read about the Old Testament teaching here. For now consider the following:

There aren’t enough word studies and grammatical arguments to erase these facts and whatever studies one produces are trumped by context every time anyway.

For the record, traditional definitions of adultery and fornication, which Jesus did not agree with, are:

Fortunately, there are many who reject both the definitions and the resulting interpretations and would suggest the following:

Those who accept the traditional definition of adultery see it as nothing more than the married version of fornication. For them, both are only sexual and the only difference is whether or not one of the parties involved is married to someone outside the relationship.

Jesus doesn’t agree with this understanding and I don’t need clever word studies to prove it. His words, carefully considered, are the proof. He said, and I am paraphrasing:

That is the exact meaning of what Jesus said and it challenges the traditional meaning of adultery.

Jesus used both words, “fornication” and “adultery,” to refer to the same married couple going through the same divorce. If traditional definitions of fornication and adultery are true they can’t both apply and Jesus would never have referred to a wife committing “fornication.”

But He did and we have to infer from that that fornication refers to sexual sin both by unmarried and married people. There is no difference. And the logical conclusion is adultery involves more than just sex. In fact:

Any time a husband or wife, in anger, speaks abusively to their partner they have violated their marriage vows, adultery. This is a mild breach and one that many can identify with – who hasn’t spoken meanly to their partner – but it hardly qualifies as justification for divorce unless it becomes chronic.

Even though some would laugh at the above example psychologists verify that many sexual problems have resulted from verbal hurts left unresolved.

But the real question is, “Why did Jesus mention adultery-by-fornication as a reasonable excuse for divorce?”

If that constitutes a reason for divorce, wouldn’t other problems qualify also? And if the answer to that question is yes, why didn’t Jesus mention them?

Was He suggesting fornication was the only reason to allow divorce and was He saying that divorce had to follow in such cases? No to both questions.

Jesus was giving us a rule of thumb for rationally gauging an appropriate time for divorce:

Any breach of the marriage contract which is equally or more abusive than fornication qualifies as a reasonable justification for divorce.

Some examples would be:

Based on experience, and with this guideline in mind, you could say that in extreme cases it is more sinful to stay married than it is to get divorced. In such cases divorce relieves the pressure and reduces damage.

This is understandable. The Bible is not a legal journal and cannot contain every possible ruling for every possible infraction of the law. It does, however, give us the guidelines for making judgments when situations fall outside the stated boundaries.

That is exactly what Jesus did in His remarks regarding divorce and remarriage.

Yes, there are plenty of people who disagree. Divorce for them is only sinful and saving the marriage at any cost is the all consuming purpose.

And remember this. Marriage was created for perfect people in a perfect world, not for sinners in a fallen environment. Jesus is the Savior, not marriage and He died to save people not make every marriage right.

One thing for sure. Those who hold extreme attitudes toward divorce and remarriage will be the last people sought when couples are facing divorce. Closed minded people are intellectually and emotionally incapable of sympathizing with a divorce and more likely to criticize, which only adds to the hurt and damage.

Many couples work very hard planning their wedding, buying how-to books and consulting professionals. Well, the same should be true when planning a divorce. Both require diligent, intelligent planning. Don’t let pain or sadness keep you from doing the smart thing. Learn from your past and plan your future.

And DIVORCE 101: A WOMAN’S GUIDE TO DIVORCE

is a book that can help you do that. Tracy, the author, having gone through divorce without suitable resources decided to put what she learned in writing. She’s experienced the feelings, personally considered the issues, had the meetings, organized the details and made the decisions and that experience is shared in her book. It is mostly practical but contains great emotional insight and support as well. Divorce 101 is a compilation of all the pertinent information you will need in planning your divorce.

If you prefer a digital copy, Tracy’s book can be downloaded here and the download comes with several free bonuses to help you get through your divorce wisely.

Tracy also put together a website, WomansDivorce.com, which provides helpful articles from a wide range of professionals – and variety of perspectives – relating to every stage of divorce. She also has a blog in which many ladies share their experiences.

If your marriage is failing and you don’t feel loved but you aren’t quite ready for divorce court yet, your problem might be more solvable than you think. In The Five Love Languages

He explains that even two good partners can easily fall out of love if they don’t learn how to love each other properly, in the right”language.” The adjustments are not difficult and languages are easy to understand. Many call his approach miraculous. Get the book. It’s a small price to pay to save a marriage.