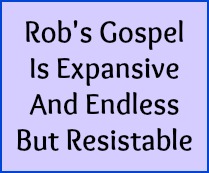 was a play this chapter would follow the intermission.

In the first half Rob offers a new way to think about heaven and hell, other than the popular…

Once you die it’s over, there’s no turning back.

And his ideas go much further than just questioning the finality of death. He says the offer of salvation may never end. The first four chapters are important for developing his thought:

That is his proposal.

In the final chapters, with these ideas fully out in the open, Rob takes a different tack. He focuses on four accepted concepts and uses them to reinforce his proposal. The concepts are:

Although Rob doesn’t focus on individual salvation – how to get saved or what happens when you do – in this chapter he does talk about the “new creation.” For him, the new creation includes everything not just people.

Rob begins by pointing out several words, all coming out of human experience, all found in the Bible and each illustrating what happened on the cross:

Rob presents these words as synonymous. The meanings are parallel rather than sequential. Each word describes the same event from a different perspective. They don’t each add layers of new meaning to the others.

But if all of these words are in essence the same, why so many? Why not use one word and be done with it?

Rob suggests that using different words enables people from a broad range of backgrounds to grasp what happened on the cross. Different cultures or settings respond better to some words than others.

For example, “Sacrifice” would be relevant for primitive cultures that understand sin, guilt and atonement in terms of blood offerings but “Redemption” would be more relevant for Wall Street.

This explanation, however, doesn’t diminish blood atonement as some might suggest. Rob is describing what happened on the “Cross” and there could be no cross if there was no shedding of blood. Rob simply points out there are other words that communicate the same thing. In fact, he concludes this part of his discussion by saying…

The point, then, isn’t to narrow it (the cross) to one particular metaphor, image, explanation, or mechanism. To elevate one over the others, to insist that there’s a “correct” or “right” one, is to miss the brilliant, creative work these first Christians were doing when they used these images and metaphors…The point, then, as it is now, is Jesus. The divine in flesh and blood. He’s where the life is. p. 129

Following this, Rob moves on to the Resurrection, the second part of this story and he makes three important points.

Rob explains that death and resurrection are really just two ends of one event, one cycle.

This death-to-life cycle isn’t new. It occurs every year as the seasons change and even every day as old cells die and are replaced by new.

So, when the writers of the Bible talk about Jesus’s resurrection bringing new life to the world, they aren’t talking about a new concept. They’re talking about something that has always been true. It’s how the world works. p. 131

Not something you can argue with.

“New Creation” Includes Everyone and Everything

Rob then refers to the outcome of Jesus death and resurrection as a “new creation” but says it applies to more than just a few individuals:

When Jesus is presented only as the answer that saves individuals from their sin and death, we run the risk of shrinking the Gospel down to something just for humans, when God has inaugurated a movement in Jesus’s resurrection to renew, restore, and reconcile everything “on earth or in heaven” (Col. 1), just as God intended it…Individuals are then invited to see their story in the context of a far larger story, one that includes all of creation. p. 134

According to Rob then, a Gospel that doesn’t include everything is “small.” The “full story” is bigger than avoiding hell and not sinning.

Rob’s Gospel, however, doesn’t work without individual involvement. He talks about personal death on many levels:

To our egos, our pride, our need to be right, our self-sufficiency, our rebellion, and our stubborn insistence that we deserve to get our way. p. 136

Some accuse Rob of being too generous but it is clear from this chapter and others that his Gospel isn’t easy. Open to all, yes. Accessible, yes. Easy, no.

See the review of Chapter 1 here.

See the review of Chapter 6 here.