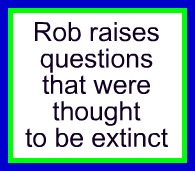 Rob’s Premise And Quandary
Chapter 1
“What About The Flat Tire?”

In his latest book, Love Wins

, Rob Bell again shows that he neither slavishly follows the curriculum nor fears testing convention. The book represents his biggest push against the envelope so far and in it he challenges some of our most sacrosanct beliefs about heaven and hell.

One question that permeates the discourse is: what does it really mean to say “God is Love” and how can we balance His love with the idea of eternal, everlasting, never ending wrath? Rob says, “What is God like?” is the recurring question throughout the book. (p. 182)

He gives us a broad sweeping statement of his focus on the cover:

A book about heaven, hell and the fate of every person who ever lived.

And in the book he asks many searching questions implying ideas that fly in the face of common understandings. But, he codifies none of them.

The book focuses mostly on when a person arrives at heaven or hell and how permanent the placement is once there. It’s mostly philosophical but Rob does include many Scriptures (134 to be exact).

What makes his approach unusual is even though he clearly challenges our accepted beliefs he makes no statement of faith nor does he provide a systematized list of doctrines: do’s and don’t’s, spiritual how-to’s or salvation formulas .

In that regard he definitely changes the rules.

He doesn’t use high church terminology to articulate his theological ideas, so in effect he speaks to everyone. Because he isn’t regurgitating what is commonly believed, he doesn’t use accepted jargon and has no need to prove he is equal to or more clever than all the rest.

He’s articulate, yes, complicated, no but he seems confusing mostly because he doesn’t parrot common terminology or ideas.

Rob also doesn’t broach the topic combatively. He mentions no modern leaders by name. He doesn’t even name doctrines associated with popular personalities and he endorses no accepted positions. Instead of taking sides: calvinism/arminianism, premil/amil, catholic/protestant, cessation/continuation, etc. he stands in the middle seemingly drawing a little from everyone.

To spur the conversation he asks a bazillion questions about. . .

He brings no new ideas to the table and in the end combines several, sort of.

He gets a lot of negative attention because he raises questions about issues that were thought to be extinct and therefore not allowed.

And for these questions he replaces the dismissive, well worn and rather unconsidered answers, which are the standard responses, with ones that are more thoughtful, that open the door to discussion and he stops just short of “believe this or else.”

And, yes, he does suggest understandings which reshape our beliefs about heaven and hell but, his intent is not to mislead. His exploration is rooted in Scripture and motivated by one firm belief. On the opening page of his preface he says:

First, I believe that Jesus’s story is first and foremost about the love of God for every single one of us. It is a stunning, beautiful, expansive love, and it is for everybody, everywhere.

This belief becomes the basis for many of his questions but Rob avoids the absolutist approach. He explores many conventional and unconventional ideas, opening the door to dialogue and pushing old boundaries but without setting up new ones.

At times he seems to deny convention. At others he seems to acknowledge it. But, he is never far away from traditional ideas. He talks through them and around them not away from them.

Obviously, Rob does believe some things with certainty but that wasn’t the point of the book. His beliefs do bleed through, though, and I’ve written a post showing what I think those beliefs are here.

For Rob, discussion is paramount and he says so in his book…

I believe the discussion itself is divine.

And Jesus, Rob points out, encouraged discussion by answering many questions with questions.

Chapter 1 is a salvo of questions. The questions and the usual answers aren’t new but, as I mentioned, they are hushed. A few of the common answers are inserted occasionally but only to create a platform for the next searching question. They poke at the gray areas and are designed to make you think. They imply conclusions Rob does not state.

Is There Really No Chance To Get Saved After Death?

What about people who never heard the Gospel because the missionary had a flat tire – hence the title of the chapter? And is our future in someone else’s hands? Can uncooperative government departments and language barriers prevent a person getting into heaven?

What about people who were told about a wrong Jesus or were abused by those who claimed to represent Jesus?

He offers a series of “what if” questions that naturally give rise to others:

By themselves these questions seem strong. Almost convincing. He leaves you thinking that maybe there are reasons to believe some people will get a second shot at salvation after death but then Rob uses one example that almost contradicts the implication.

He refers to Renee Altson who, in spite of being raped and molested, repeatedly over many years by her Sunday School teaching, Scripture quoting father, found the right Jesus anyway.

Her experience demonstrates the pervasive nature of the Gospel and proves that tragic experiences don’t always prevent a person embracing Jesus.

Rob even has a later chapter dedicated to the omnipresence of the Gospel, “There Are Rocks Everywhere.” So, coupling Rob’s questions with her experience seems confusing unless he is trying to emphasize uncertainty.

Rob is giving us a reason to think not an absolute answer.

It is, however, naive to think every single person in every era was exposed to the Gospel before they died. And it is harsh to suggest that it doesn’t matter.

So, Rob points out the tension between circumstances that can prevent a person’s engaging the Gospel and the widespread accessibility of the Gospel.

Exactly How Is Salvation Secured?

Rob doesn’t deny the idea that Jesus is the only way to salvation – although he doesn’t couch the belief in terms we often use – but he does compare the salvation formulas we commonly use today to how various people expressed saving faith in the Bible:

In the Bible, however:

And to this I would respond with a negative and a positive observation. The negative: Rob has mixed contexts and confused semantics to make his point. “Saved” sometimes refers to temporal salvation, not eternal, and that is true of the Matthew 10 reference. And “Israel,” as it is used in Romans 11, is referring to a national entity not individuals.

Although Rob warns against abusing context in his chapter on hell he seems to be playing with it here. The double standard doesn’t sit well with the theologically informed.

But, in spite of that negative observation his point is a good one, which is: salvation has been over formularised – not his words. In an effort to make salvation simple we have made it mechanical – also not his words.

And that is just the first chapter.

Before you go negative on Rob, get the book

and read it for yourself.