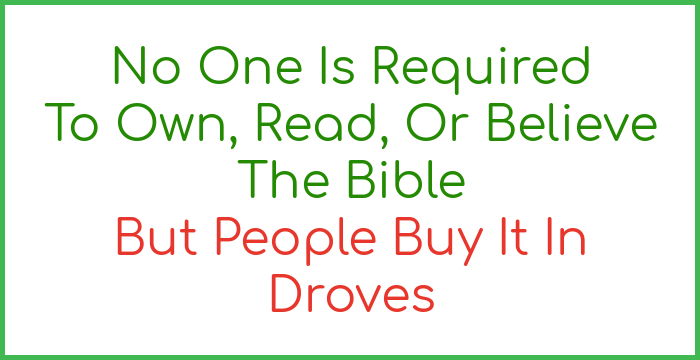 The Bible Sells Best Because
It Is Living, Powerful And
Universally Desired

The Bible is often said to be the world’s best-sold book but search the bestseller lists and you won’t find it anywhere, top to bottom.

It makes you wonder. If it’s a best-seller, why isn’t it on the list? Well, the answer is simple.

The annual sales figures for the Bible are so high, averaging between $425m and $650m, repeatedly – year after year – that it dwarfs the sales of all other books. The best any other book can hope for is second place and a very distant second place at that.

A list of “best sellers” is interesting only if the top spot is up for grabs so the real best-seller had to give way to all the rest.

Guinness Records reports an estimated 2.5 billion Bibles were printed between 1815 and 1975 and The Economist estimates more than 100m new Bibles are printed every year making a staggering total of over 6 billion in print. The New Yorker also pointed out that in 2005 the number of Bibles sold in the US alone was conservatively estimated at 25 million and Barna research indicates that 92% of all American households have at least one Bible and typically own three. That means most of the 25m Bibles are being sold to homes that already have at least one and likely more.

By comparison, the Harry Potter series – 7 books in all – sold only 400 million copies total and no one expects it to keep pace. Also, there is nothing to suggest it will become a classic and I doubt existing owners are buying second, third or even fourth copies of each book in the series.

Other interesting comparisons include Mao’s book of quotations which has sold over 900 million copies in a comparatively short time, since 1966, and the Qur’an which became popular in recent years but there are big differences in the way these two books compare to the Bible.

Not only does the Bible continue to enjoy annually increasing sales and distribution totals, it does so strictly without coercion. No one is required to buy, own, read or believe the Bible. In fact, in countries heavily influenced by the Bible, freedom reigns. People who don’t believe are free to disagree with it publicly if they wish. They can swear at God, find fault with the Bible, disagree with those who believe it and debate the issues without worry.

All of that is to say that Bible-influenced countries are open. The same can’t be said for Mao’s book or the Qur’an.

When Mao’s book came into print every home in China was required to have a copy and that regulation was enforced for many years. The penalty for not owning the book was severe and the Chinese population, being so large, accounts for several hundred million copies.

The penalty for owning a Bible, by the way, was worse. One book was banned, the other required reading but in spite of the ban, Bible distribution is catching up with Mao’s book even in China.

Like Mao’s book, the Qur’an’s popularity is also the result of enforcement policies. It is used heavily in the educational systems of Muslim countries and doesn’t only influence lawmaking, it is the law. Based on its teachings, some are disallowed an education and it influences many areas of public life also: what people wear, what they eat, and how they interact socially and politically.

Some countries sponsor contests to see who can quote the Qur’an verbatim. You do find pockets of Christians in Muslim countries but they are persecuted regularly. There can be severe penalties (beating, imprisonment, and the like) for owning a Bible, and converting to Christianity is even worse.

All of that is to say that Mao’s book of quotes and the Qur’an enjoy high print volumes due to political and cultural enforcements. The Bible, however, has never enjoyed the same kind of promotion.

In the earliest years of church history, clerics refused to translate the Bible into common languages arguing that only the well-trained should read it. Anyone who refused to accept this dictum and made an effort to translate it into any language other than Latin was persecuted and in some cases executed. Common language Bibles were not meant for the masses (no pun intended).

The Bible has never been an easy book to own.

John Wycliffe, who outspokenly differed with the organized church on many issues, was one of the first to translate the Bible into English. Although he died of natural causes, he was persecuted while he lived and pronounced a heretic several years after his death. To broadcast his judgment, his remains were exhumed in 1428, crushed, burned, and thrown into the River Swift. His writings were also burned and scattered.

William Tyndale was the first to translate the Bible into English directly from Hebrew and Greek. His New Testament was also the first English translation to be printed using moveable type and for his efforts, he was executed by strangling and burned at the stake along with as many of his Bibles as could be confiscated.

It wasn’t until 1611 that the first “authorized” (allowed) version of the Bible was produced. This translation is known today mostly as the King James Version. Even though the Bible has been translated, published, read, studied, analyzed, bought, sold and given away freely since then, particularly in the English-speaking world, it is still banned in many communities.

But in spite of the bans and the persecution, the Bible still enjoys the greatest popularity of any book ever produced in human language. Although atheistic, the Chinese government has allowed the distribution of more than 50m Bibles in their country. Why? Popular demand.

The government couldn’t stop the supply of Bibles so they decided to slow it down by restricting the allowed number. More than twice the 50m are needed and Bibles are still being smuggled into the country illegally.

The Bible’s popularity is not based on clever marketing, cultural trends, or legislation. It is based on the desire to know God and its availability is made possible by the efforts of many determined people, now and in the past, and the miraculous intervention of God.

Obnoxious believers should understand that Bible truth is not like rocks or jam or catch phrases. You don’t have to throw it at people. You don’t need to smear it on everything or pin it on your lapel. The Bible changes one’s life, it doesn’t supplant it. If you want to spread the Word, live the Bible, don’t just quote it.

And for those who oppose it, remember this. No one has to own a Bible. No one has to read a Bible or understand it. No one has to believe the Bible but don’t waste your time trying to oppose it. Not only would you be going against the stream, but you will also get egg on your face for sure.