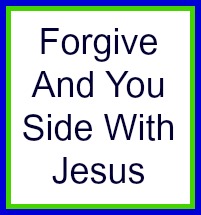 God isn’t isolated to one area or one time slot each week, like church.

He’s in church, yes, but no more so than the office or the kitchen or the wee hours of the morning when we can’t sleep. God is a little bigger than a few small segments of your life.

He’s everywhere all the time and He’s never idle.

He’s listening and responding even when He isn’t doing any apparent thing in your behalf.

He tags along everywhere we go, in church and out, and that means He is aware of it when we feel like people are throwing stones at us. He feels the impact of every stone but rather than protect us, He uses those “stone throwing” moments to help us learn.

Church is His classroom. Life is His internship.

Sometimes, however, we miss opportunities to gain valuable experience because we respond to life’s difficulties the wrong way. We feel cheated, insulted, unfairly passed over, misrepresented, falsely accused or manipulated – Offensive, all of it! – and we call on God to make it go away as if He is our personal judge, prosecutor and jury.

We cry and moan and writhe in pain and we usually do this because revenge isn’t really an option. Unfortunately, there is only one thing that helps and it is the last option on the list . . . if it’s on the list at all.

Forgive all the stone throwers!

Now, before I say more about forgiveness please understand that offenses are inevitable and Jesus is the one who made the point.

The proof of that statement is the reality we live everyday. Offenses occur more regularly than the sun rises and they come from every direction:

Offenses occur between employers and employees and teachers and students. Even friends, neighbors and fellow Jaguars fans will offend us from time to time. Familiarity breeds contempt because the closer we get to one another the more our faults emerge. And those faults offend.

But you don’t need to be close to offend. Even strangers will abraise occasionally. The idea that offenses must come is not in question, but how shall we respond?

Responding personally to what might be considered an avalanche of offenses turns one into a perpetual victim; not a useful response. It eventually produces bitterness and everyone around you absorbs the misery also. It’s a downward spiral.

Forgiveness is the answer and there are good reasons we should learn this special art? The first reason is:

Jesus Taught Us To Forgive

And He did this two ways: by instruction and by example. The preponderance of evidence here is compelling and suggests no person has any excuse for not forgiving others.

Everything Jesus taught He also modeled, so it is no surprise that we see Him extending forgiveness to so many people under very extreme circumstances.

Anyone following the example of Jesus must be found on the side of forgiveness. Any other position pulls against Jesus not with Him.

Another reason we should develop an attitude of forgiveness is:

None Of Us Inhabit The Box of Righteousness

No human being lives entirely in the box 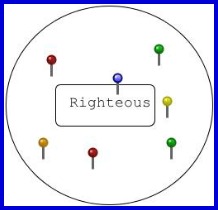 That means that the only type of human who can retaliate against an offense is an offensive human! Does that make sense?

I’m not suggesting that all humans are equally offensive or offensive in the same ways. We’re all different. Some live closer to the box than others. Some may have a foot in the box or lean up against it – I’m thinking of Mother Theresa types here – but no person lives only in the box, except Jesus and He chose to forgo judgment for the present.

Picking up the stones others throw at us and throwing them back, not only perpetuates the stone throwing cycle it also encourages others to do the same. Before long everyone is so busy throwing stones it becomes a competition to see who will be the last man standing.

The only way to win is for everyone else to die.

So, think about it long and hard before you react lemming-like to the vermin around you. Your reaction could start a war.

It Is The Only Way To Be God-like

The Pharisees excused their unforgiving attitudes by teaching that only God could forgive sins. In the eternal sense that is true but there is a bigger observation to make. We have no right to judge sins.

Jesus spent His time teaching about forgiveness and showing us how to forgive. The only thing He said about judgment is “don’t do it!”

We Can’t Change The Past

And the only way to change the future is to not become fixated on what shouldn’t have been or what could have been.

You can only learn from the past if you don’t try to change it and the lessons we learn can only be applied to the future. Change your perspective.

Forgiveness Relieves Us of Revenge, Resentment And Obsession

We can’t change the past but it can definitely change us if we entertain the malice of revenge, resentment and obsession. The longer we hold onto to vengeful attitudes the more toxic they become.

If bitterness is the poison we drink while wishing someone else would die then forgiveness is the only antidote. Don’t drink the poison!

Forgiveness Must Be Given Not Offered

Offering forgiveness is a very condescending, self righteous, arrogant way of expressing a very thinly veiled attitude of judgment. Nothing forgiving about it.

Be forgiving, adopt the attitude and you’ll open the door to better relationships.