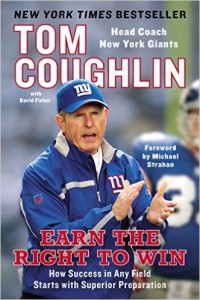 It’s no surprise that Tom Coughlin has written a book but you might be surprised that it’s not the usual co-written scrabble to make money off celebrity status. Nothing promotional about it.

In this book Tom is making his point not the publisher’s. It’s not a bio of any person or organization. It’s about winning and how Tom managed to do that consistently over his entire career.

No, Tom is not a writer, he’s a coach, but the book shows that he’s cerebral about his job and there are many points in the book that are universally useful for any person in any kind of work.

This post covers chapter one. The previous post covered the introduction in which Tom emphasized his primary point, preparation and in chapter one he begins with “Build The Structure.” Following are the main points of the chapter.

Tom begins in the usual place, goal setting, but what he says about it challenges traditional thinking. Most of us are trained not to bite off more than we can chew and there is a place for that type of caution but Tom says set a goal and make it a big one. He quotes Michelangelo to make his point.

The greatest danger for most of us is not that we aim too high and we miss; rather we aim to low and we make it.

It’s interesting to note that many of Tom’s thoughts are not original. His plan of action is his, though even that isn’t absolutely original either, and he works his plan tirelessly but Tom isn’t too proud to listen to other good leaders in any field. You’ll find him quoting several prominent individuals throughout the book.

But once Tom sets the goal he doesn’t dwell there.

Know What You Have To Work With

Or another way to say is “Start with what you have.”

Tom starts with the long view, the goal, and then comes right back to the ground view, where he is standing. Once you’ve set a big goal, leave it alone (don’t worry about it any more) and begin assessing the tools you have to work with and how best to use them.

Some people get so carried away with trying to define and refine the actual goal, they fail to start making progress. Reaching any great goal is not a one step or few step process. Big goals make for long journeys but you can only start where you are.

The important thought here is you can only do what you can do. This is where you don’t bite off more than you can chew or bet the farm.

To illustrate my point, I recently wrote and published a book on divorce

. Writing was the easy part. Publishing, however, wasn’t so easy.

Traditional publishing wasn’t open to me so self publishing was my only option. Sounds straight forward and there are many easily accessible self publishing options all offering most of the same packages. The problems is they all charge a bundle and there are no guarantees. The cheapest package I could find for my basic needs was close to two thousand dollars. My situation didn’t allow that kind of outlay so I researched and found people who could provide the same services at a tenth of the price and in each case, unlike self publishing service, the job wasn’t finished until I was satisfied.

No, I’m not a New York Times best selling author, yet, but I am learning to win the small games right now and I started with what I have in hand.

But let me warn you not to get too hung up on your personal weaknesses or inabilities. Assess what you have not what you don’t have. Don’t worry about how able others seem to be or how disabled you are by comparison. There are as many roads to success as there are people traveling. Your road is your situation. Walk it. Trying to change it is wasted energy.

The best way to overcome limitations is to take stock of what you can do and what opportunities are available to you. Don’t focus on the goal or what you don’t have.

Once you’ve done your personal resources assessment you’re ready for the next step.

In other words, this is your short term plan, your schedule, the things you will repeatedly do to insure you are making consistent progress in your journey to your ultimate goal.

Obviously, your schedule will be a mixture of daily, weekly and monthly activities.

In every case your results will be measurable. You’ll know if you’re winning and by how much and if you follow your plan repeatedly over an extended period of time you eventually win more than you lose.

That approach builds hope and belief and you need large amounts of “self belief” to reach personal goals, especially big ones. “Self belief” inoculates you from popular public opinions about those trying to succeed: skeptical at the idea, critical of the progress and condemnation when there are setbacks. You need self belief.

Establish The Rules And Enforce Them

I call this “create a culture.”

In most cases no one succeeds if they aren’t working in a team. Husbands and wives will win together or lose together. Stephen Covey says interdependence is much more valuable than independence.

But teams only work well when they work together, according to predetermined rules of operation.

Couples, for example, must move from a “you want” – “I want” mentality to a “we want” mindset. Otherwise they are competing against each other. That’s not how teams work.

When “you-me” is transformed to “we” the couple begins building a cultural framework, a unified mindset, an atmosphere of progress in which both work together against the odds and eventually forge a life goal in spite of the obstacles.

But they need rules of operation to create and sustain that sense of combined effort.

These rules, by the way, are practical not moral. They reflect wisdom not rights and wrongs. When rules are observed consistently the progress made helps each person understands the importance of each members participation. No one is more important. All are needed and appreciated for what they do.

For example, financial rules involve things like budgets and the budget rule is simple. Never spend more than the amount allocated for each budget category. When the team principle is working everyone thinks through and contributes to establishing a budget.

And the rule for this situation is if we haven’t discussed it ahead of time then we discuss before we spend the money to make sure everyone is aware and happy.

One of Tom’s rules was you had to show up for team meetings five minutes early. Rules are great. They build an “Us” environment rather than a “me” or “you” one.

Or don’t be manic-depressive.

Manic-depressives get very excited or very depressed sometimes for no reason at all and you rarely see it coming. They never reach a steady state and that is Tom’s objective in coaching his teams to win.

By resilient Tom means we should learn to sustain a sense of well balanced hope and belief. We should stay even keeled.

When things go well we should be cautiously hopeful. We should expect to succeed but not take success for granted.

When things go badly we should be resiliently hopeful because we are prepared for it. We expect bad moments and therefore aren’t surprised. We also know they don’t last forever so we don’t give up.

Tom’s point is being prepared enables us to remain emotionally steady during extreme highs and lows, which are inevitable.

Financial progress, for example, never follows a straight line projection. It goes up and down depending on the economy at large and contingencies at home.

Build An Organization With Character

The two things we look for in the people we work with are ability and character but they are separate issues.

People with above average levels of ability – the kind of people commonly found in the NFL – sometimes have very little character. Everything comes to them easily. Working hard to stay on top isn’t required and they are so loudly recognized they don’t learn what it is like to earn the right to play much less win.

These people are not easy to coach. Humility – coachable, teachable – is lacking. In the early stages they led the teams they played for and never learned to be a team player.

So when Tom refers to character he is talking mostly about coachability (humility) and everyone needs to be coached occasionally. Tell me which person on any team never needs to be taught. No one has all the answers for every situation.

There are other qualities to develop but humility is most important. It catalyzes the learning process.

This goes without saying. No single person can do everything. To succeed as a team every person must play part, the big people and the little people. Tom says no team is stronger than the 53rd player on the roster.

Fifty-three the largest number of active players allowed on the regular season roster but for Tom the 53rd position is delegated responsibilities on the team and their performance is just as important as anyone else.

Tom’s thoughts remind me of 1 Corinthians 12 where Paul says all the members of a church have gifts and every gift is equally important. I think Tom’s method agrees with Paul’s advice.