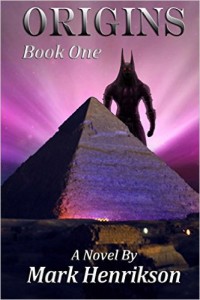 Origins by Mark Henrikson is Sci-Fi with a twist. It is written from an alien perspective but is based on historical record (the biblical account of the Exodus).

It comes in two formats: paperback and ebook. Both available through Amazon. I received my copy free through BookBub.

The story’s timeline spans some three thousand years (plus/minus) beginning with the period just before the Exodus and extending into the present. The narrative alternates between the two ends of that period and follows four plot lines: aliens in Egypt, an alien (Hastelloy) visiting a psychologist in the present, an NSA agent (Mark) attempting to interfere with NASA’s deployment of communication devices and archeologists researching Egypt’s pyramids.

The book also makes reference to thousands of years prior. The lead character, Hastelly, is 25,000 years old.

The story begins with two alien forces poised to engage in intergalactic war. One side is benevolent and non-interfering. The other forcefully intrudes and abuses foreign intelligent life forms wherever found.

The outcome of the battle isn’t an absolute win for either side. The bad aliens get the upper hand but the good guys manage to escape, and in the chase that follows both species crash land on planet earth.

It’s a bad situation for both. Though advanced well beyond even today’s technology, neither has the means to launch from planet earth and return to their home worlds.

This is where human history, with particular focus on the Exodus, is explained with a different twist.

While the book does have a creative element there are several fail points that should be noted.

One, the theory that Aliens participated in building the pyramids has been around a long time. Nothing original there.

Two, the story line, which follows the major events of the Exodus, isn’t original. Even the characters are borrowed from the Exodus story – Mosa, the lady who grew up in Pharaoh’s palace takes the place of Moses.

It was a little monotonous to know what was going to happen before it happened.

Three, the last fail point leads to the third. The book moves quickly from one event to the next as if borrowing from the readers familiarity with the Exodus. Characters are developed poorly. Events are painted in broad strokes. Familiarity with the biblical version of the Exodus is assumed.

The best portions of the narrative happen before Egypt or the Exodus come into view.

Four, alternative it is not. Alternative history offers a different set of possibilities. Events as we know them alter. In Origins nothing changes. Slaves happen, pyramids happen, plagues happen, Red Sea happens, wanderings happen and Moses (Mosa) leads. The outcomes are the same.

Alternative interpretation, yes. Alternative history, no. A more interesting narrative would have the slaves ousting Pharaoh and taking over Egypt.

Five, idioms are a problem. These aliens don’t just speak English, which is quite acceptable given the primary market place is English speaking. They speak a modern American idiomatic English. For a parody that would work. It’s not a parody.

This is book one in a five book series so all four story lines are left dangling. Unfortunately, I didn’t feel compelled to read further.

To the author’s credit, at this writing the book has received over 625 reviews, most of which are positive.

I got my copy free through BookBub.