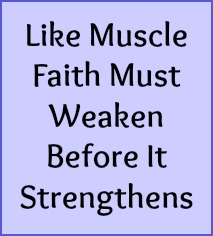 Please note that I didn’t say faith is formed in spite of wobbles but rather it is formed through wobbles.

Wobbles are the exercises that faith goes through to grow and Abraham exemplifies this truth.

The Bible says of Abraham that he was strong in faith, and yet it records his many foibles. It makes you wonder.

You could almost define Abraham by his wobbles so we need to qualify what strong in faith really means. But first, what it doesn’t mean or what the Bible doesn’t say.

It doesn’t say he had enough faith, as if faith is something to keep pumped up. Abraham didn’t go through hyping exercises each morning trying to achieve a faith-state mentally.

It doesn’t say his faith was big, as if it comes in sizes, the implication being faith only works when it is big. If faith was measured by size, we would have to say his was often just as small as it was big. Size wasn’t an issue.

It doesn’t even say that his faith was strong. It says he, Abraham, was strong in faith. That is a significant distinction. Faith is just faith. It’s a tool. We use it – or not – as much as we will.

Many people have handyman tools they rarely use and are dangerous on the odd occasions when they do. Maybe faith works in a similar fashion.

Not only is Abraham credited as being strong where faith is concerned, he is also referred to as the example for all those who follow. That is, he is the father of faith. This is very interesting because, as I said:

On some days he seemed determined to believe but on other days, he flipped.

He relocated from Ur to Canaan, an enormous faith step, but he took family members with him. Exactly what God said not to do.

That’s just one example. There are many more.

Abraham wasn’t the first person to exercise faith and in some ways he wasn’t the most impressive. Abel’s faith was more humble. Enoch’s was more spiritual. Noah’s was more patient. Abraham displayed some of those qualities but not to the same extent. All of those people were recognized for their faith but only Abraham is recognized as . . .

The father of all them that believe. (Romans 4:11)

And those that believe are called . . .

The children of Abraham. (Galatians 3:7)

With so many other impressive examples of faith preceding Abraham, why is Abraham singled out as the father? What exactly is the difference?

The answer has to do with application. Obviously, faith can apply to many areas: parenting, church planting, evangelism, even building a business. Abraham’s faith involved several of those areas but he became faith’s father predominantly in only one: salvation.

Abraham believed God and it was accounted to him for righteousness. (Romans 4:3)

Not only did he express saving belief personally, he also believed in ways that enable him to become the father of the nation (Israel) through whom the Savior would come. In a sense, his faith made salvation possible for everyone.

All of that is little off the point, though. A more important question is with his many wobbles why was he referred to as strong?

The word strong is associated with things like durability, unflinching resolve, brazen certitude. Abraham had none of those things. No fist pumps. No boisterous declarations. His greatest displays were doubt and frustration.

But he was referred to as strong.

Here again, the answer might be more simple than we think. Maybe the word strong means persistent in faith, to the point where he became proficient. He exercised faith more than others – especially after his mistakes – and developed a level of experience others didn’t have.

It doesn’t require strength to believe when everything is going well. Strength is in persisting when things are going wrong.

That was the case with Abraham and he is our example to follow.