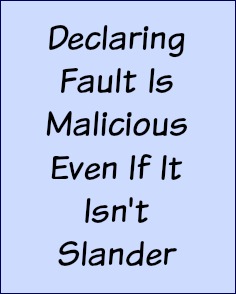 I’m neither a judge nor a lawyer but this ruling raises several questions about the wisdom of requiring fault in the case of divorce:

If The Claims Are Not True

Courtrooms are like megaphones for sharing dirty laundry. The records are public and scandalmongers love it! It’s the portal to the gossip centers of the world. Sadly, accusations made in these proceedings, true or not, are likely to leave stains on the accused.

Even if the cat is a mirage, it’s still out the bag and much more difficult to contain than the real thing.

The accused will never fully purge the characterization? There’s bound to be endless rebuttals, if not reprisals.

If The Claims Are True

What if it’s true? What if the accused is as bad as the claims suggest? Is the courtroom the best place to mention it?

Courtrooms are punitive not corrective. It’s the place where evidence is weighed and the guilty are branded. No remedial counselling is offered.

If one partner has character issues which can’t be resolved and the other partner needs release, public character assassinations may not the best way forward. 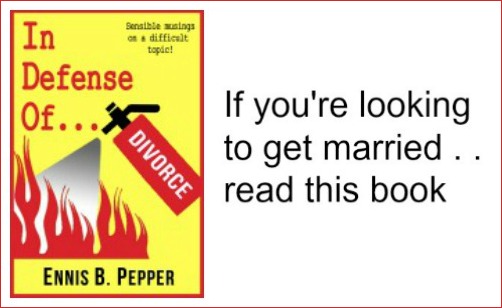 Handwriting On The Wall

Maybe Omar didn’t prove his accusations but the very fact that he made them in such a public way is indicative of irretrievability.

What is the judge thinking? What more does he want? If he couldn’t accept the specifics of the claims, he should at least recognize the obvious. Is there any way forward for this marriage?

Judging Divorce Is Never A Solution

Divorce law in India requires that fault be stated and proven, but this is not a solution. It would be better to disallow divorce completely than to require fault.

After a married partner files for divorce, is there any possibility of going back? What’s left? There is an aftermath either way.

If divorce is not allowed, as in the case with Omar, can you imagine how chilling the relationship would be afterward?

Honey, I didn’t really mean it!

Does the court or any other thinking individual believe a better marriage will naturally follow? The gap can only widen. Nothing is corrected. The marriage is worse after the plea than before.

But that’s not all.

If the divorce is allowed, can you imagine how future conversations might sound when dad collects the kids for weekend visits?

And what about school. Never mind the insecurities caused by family breakups, school peers – especially the bullies – are bound to feast on these juicy bits of information. Even the children are branded.

Forget respect. Decency is out the window.

Usually we keep personal issues private. We hide the worst. We don’t share it publicly. But when it comes to Fault divorce, all windows and doors are opened. The cat isn’t just let out the bag, it is imprinted on a billboard.

I can’t say the judge was wrong. Maybe Omar couldn’t prove his claims but in what decent world would he have to make them?

I will admit that if you wish to keep the divorce rate low, requiring public crucifixion of at least one of the partners is a way to accomplish that. Take every bad quality an unwanted partner displays and put it in a public document for all to see. That is essentially what happens when fault must be established to justify a divorce.

Even the worst married partner hesitates. The approach is definitely prohibitive and that may very well be the reason India has such a low divorce rate.

One thing for sure, a person must be very desperate, or brave, to initiate a divorce under such circumstances.

I have several really great friends and I love them all. We’re close. We share personal stuff. I’m comfortable asking them favors and vice versa. It’s give and take.

But as close as we are, I don’t want to marry any of them, and it has nothing to do with the fact that I’m already married. If I were single, I still wouldn’t want to marry them. I don’t have to think about it. I just know.

That doesn’t mean they are bad people or poor marriage partners or unreliable, shiftless, no-counts. It means they aren’t for me and I’m not for them.

The reason I mention this is because it is very possible that a young, inexperienced person could meet and marry someone in the great friend category only to realize afterward that the person they married qualifies only as a great friend.

The friendship they love. The marriage, not so much.

But, of course, there are complications to such a situation. If you marry a great friend and then separate, it gets ugly. Instead of moving one notch down, from married back to great friend status, you become enemies. It happens often.

I’ve seen this happen up close and personal many times. People who were great friends get married and then get divorced. Their relationship is radically changed, and the friends they shared in common feel like they need to pick sides.

But I’m wondering. Does it have to be this way? Is that the only possible outcome? What is it that makes this series of transactions so traumatic?

What is it that motivates legislators to require couples breaking up to establish fault? What or who are they protecting? Is there a better way to do this?

Is it the nature of love and marriage, the psychological deficiencies of human nature or does society’s perspective on the issue set us up for these relationship feuds?

Maybe a little of all three but this post is focused on cultural perspectives. India’s approach needs adjustments.

It would be simplistic to suggest that going from friendship to marriage and then divorce wouldn’t leave an unwanted after taste, but how bad should it be?

Newly weds may discover layers they don’t easily accept and may eventually find intolerable, but the qualities that made them friends haven’t changed.

So what is it about divorce that transforms a great friend into an absolute enemy? Whatever the answer or the solution, finding fault is a part of the problem.