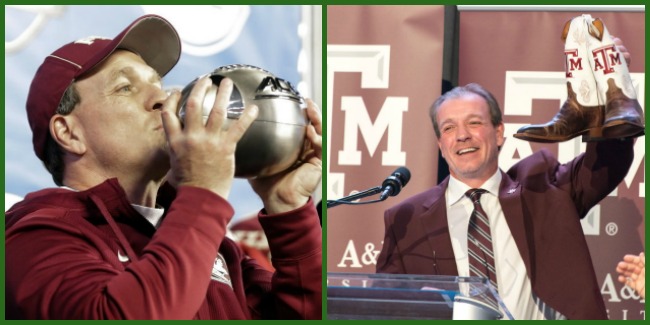 This May Be
A Good Thing

Jimbo Fisher just finished eight seasons with highly recognized achievement as head coach for the Florida State University football program and now he’s moving on to Texas A & M. He’s taking on another head coaching job but this time in a conference that is most unforgiving.

It’s one of those jobs where if you don’t do well, and very quickly, you may as well pack your bags.

Jimbo seemed to do well at Florida State but all that’s in the past now. The big question is how will he do in the future? Will the next stint fare as well for him?

Whatever happens, it won’t be easy. The conference situation alone is difficult enough but that’s just the obvious. Adding more stress to an already difficult situation, Jimbo negotiated the highest head coaching paycheck ever (7.5 mill a year) and that from a school with a mediocre past. Even Gus Malzahn’s new contract is for less (7 mill annually) and the upgrade came only after his team bumped off Alabama and Georgia in the regular season.

That’s not easy to do at any time, under any circumstances, and you can bet your best fan jersey it won’t be repeated by Jimbo in the near future, other than in his dreams. You can also bet TA & M will be expecting no less.

So, the question is this? Is Jimbo crazy or is he one of the best coaches that ever walked planet earth. Important question! Let’s look at the history.

If we go by the numbers, it all sounds good. Jimbo sports many medals on his lapel:

Those numbers represent only his tenure at FSU. He’s been the quarterbacks’ coach and/or offensive coordinator at several high profile schools including LSU and has worked magic with quarterbacks and game plans. He was assistant at LSU when they won the National Championship in 2003.

These are not shabby credentials but how do we read these numbers? What do they really mean? Is he, in fact, that good or is there another way to interpret the data?

Obviously, he’s a talented man. No one would suggest he lacks skills. He can recruit. He understands the game of football as well as any coach. He’s seen it from many perspectives. Even Nick Saban admits Jimbo coordinates offensive play as well as any in the game. And he’s coached some great quarterback talent to stardom in the NFL.

But what I’ve said about Jimbo applies to a long list of coaches at many levels in collegiate ball. Every championship team has coaches who make the same contributions but most of them never wear the head coaches hat or receive unimaginable paychecks.

So, again, we have to ask. Do these numbers represent hardcore evidence that Jimbo is the next great man to hold a position from which many have fallen? Or is it all just circumstantial? Texas A & M is betting on the former. I think we should all be a little nervous for such a historied program.

I have to admit up front that as a die-hard Seminole fan, I questioned Jimbo’s head coaching style from day one. I didn’t say anything before now because I was concerned about objectivity. Replacing Bowden is not an easy thing to do. Bowden fans, like myself, don’t always see straight when making comparisons. It’s not easy warming up to a Bowden replacement.

But that’s how I saw it. Jimbo always seemed to be a nice person – one of the good guys. He seemed to know football well, but I never got the sense that he was in control. His on-field presence was a bit explosive, erratic, angry. He always seemed agitated. It appeared that he was too involved in the play by play.

That was my first impression. That alone made me nervous.

As time passed, there were other issues that seemed to emerge.

I readily admit that, although an avid spectator of football, especially college football, I am not an aficionado. There are nuances to the game I do not and probably will never understand. I admit that Jimbo has far more knowledge and insight into football than I.

But, I doubt seriously that he understands football any better than any other coach with the same number of years playing and working in the field.

So, I would like to put aside the deep nuanced analysis of Jimbo’s efforts at FSU and make a few broad observations that indicate Jimbo may not be as effective as some suggest.

I can’t tell you how happy I was when FSU won the 2013 National Championship. It was a great year for the Noles and for the ACC. The vaunted SEC was knocked down a notch or two and what’s not to like about that?

But I was as concerned about how the game played out as I was happy with the result. There wasn’t much for Nole fans to be proud of. Florida State, who was clearly the more talented team, seemed confused, distracted like they only started thinking about the game as it started.

Auburn, of course, didn’t help. Gus Malzahn, who I think is one of the finest up and coming coaches around, had his team pumping. They had a great plan and they executed. It was as if they couldn’t wait for the kickoff and they enjoyed every play.

If Auburn was aware of the talent divide, it didn’t show. Unlike FSU, they came to play.

I held my breath the whole game. It wasn’t fun to watch. It was a miracle that FSU pulled out a win and, unfortunately, coaching had little to do with it. Incredible talent eventually won the day.

No one talked about this following the game. Everyone was too busy celebrating but I was worried. I thought then, and still believe now that Jimbo is not a preparation coach. His teams are not ready for games, especially the big ones.

Losses in the bowl games over the next two years justify the concerns. Oregon mashed FSU in the first 2014 playoff and Houston embarrassed the Noles in the 2015 Peach Bowl. FSU played catchup the entire game against Houston and never caught up. Even talent couldn’t make the difference.

FSU’s recruiting classes in recent years have been great. Out of seven years, six classes were top ten and five of those were top five. Most of the time Jimbo gets the credit for this but, again, I’m not so sure.

Jimbo didn’t build the FSU football program. He didn’t start at the bottom and work his way to center stage. FSU had a reputation long before Fisher donned the garnet and gold. He stepped into a good situation.

To his credit, whatever recruiting he did, worked. He brought in some really great talent but we have to ask. Did those recruits line up only because of Fisher? Did any other coaches influence this outcome? Would the recruits have come only because they believed in Fisher or did FSU’s established reputation play a part?

These questions are important but they miss the most important point.

With all that great talent, where are the results? Why wasn’t FSU in contention for National Championship more than once? Don’t mention the playoffs at the end of 2014. They don’t count. Losing 59 to 20 is a joke, especially when the team they lost to, Oregon, was kicked around by Ohio State in the final (42-20).

FSU wasn’t prepared for that game, and I was not surprised. In fact, I’m sorry to say that I anticipated it and told a friend I thought they would lose badly.

The 2015 bowl was no better. Houston’s coach admitted his team could never match FSU’s horses. It didn’t matter. Fisher was apparently not paying attention and the entire team followed suit.

And the 2017 season? Yea, the starting quarterback was injured in the opening game but does that mean the season’s over. Didn’t FSU still have a defense that was touted as the best in the nation on paper?

Wouldn’t a head coach be resourceful enough to find a way to motivate wins with a great defensive approach? Wouldn’t a motivated defense take pressure off a developing freshman quarterback?

To explain his poor season and his eventual move, Jimbo has complained about the poor resources FSU provides for his team. They can’t keep pace with the likes of Alabama, Clemson and others who have state of the art facilities.

There’s nothing wrong with wanting the best facilities and resources for your team, but please! Good coaches are resourceful. They find ways to get the job done with whatever they have in hand.

And his predecessor is a good example.

Bobby Bowden took a fledgling program and beat the best in the country, on the road. He didn’t wait for better facilities or complain about the pay. He took his team on the road to every big name school that would have him. And he often won.

Bobby was the King of the Road, the gunslinger of football. He whaled. He never whined.

Running Or Moving Up

Personally, I believe Fisher is running. He had a bad year, a very bad year and he knows there is no excuse so why not run. It’s the easy way out. I’m not sorry he’s running. It saved the school some money and the fans more pain.

I’m not sure what A & M’s motivation is but when you’re passing out so much money, you’re bound to get a bite.

I wish Mr. Fisher and Texas A & M well but we may shortly have new evidence to show that Jimbo should receive less than the five-stars everyone thinks he deserves and certainly less than 7.5 million a year.

Unfortunately, he’s not a loss to FSU and I hate to say it but I doubt he’ll be much of a gain to A & M.

I have always cheered for the Noles. Always! When they lost, I was depressed. But to Jimbo’s credit, that changed. For the past three years, I have cheered for Clemson when they played FSU. I hate to admit that, but I knew Clemson had a better chance of Championship aspirations under Dabo than FSU had under Jimbo. And I’m an ACC fan and a coach fan also. The ACC is a great conference and good coaches help make the world a better place.

And for that reason, I am excited! I’m excited about Willie Taggart! He comes in with head coaching cred. He grew up in Florida passionately supporting the Noles. May he do well at FSU.