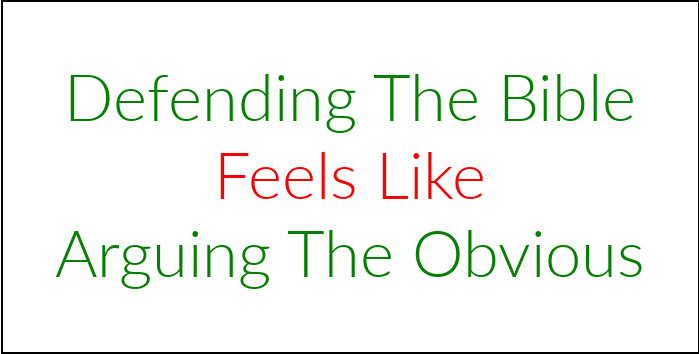 Three, all we can do in one brief post is scratch the surface. The following outline is just a brief framework around which further study should be encouraged.

Archeology Verifies The Possibility Of An Accurate Text

The Bible was written over a period of approximately 4500 years. That’s such a long period of time that most people assume corruption would have seeped into the text over the ages.

The Book of Genesis alone goes all the way back to Adam and covers at least 3000 years of history. All the family heads from Adam to Joseph made entries into this record: Adam, Noah, Shem, Abraham, Isaac, Jacob, and Joseph.

Is it possible to keep the record straight and accurate under these circumstances? The answer is, yes!

Archeology verifies that family records were kept in this manner and in the earliest stages were inscribed on stone (thousands of stone records dating as far back as 5000 years ago have been found). That would obviously make the records easier to preserve and nearly impossible to edit. It’s written in stone so to speak.

If you consider Moses the first person to begin officially compiling the Bible, the process took approximately 1600 years.

Moses received Genesis as the family history, recorded by various individuals (from Adam to Joseph) and He wrote the next four books, Exodus through Deuteronomy during the last forty years of his life.

The rest of the Old Testament was written over the next 1000 years, the last book written around 400 BC.

The writing of the New Testament began around 50 AD and was finished around 90 AD. These figures are approximations but they serve the purpose of this post. You can read more on the timeline at Compelling Truth.

Here’s the point. That’s a long time for one unified document to maintain a singular focus. In spite of this long span of time, the message never diverted from a coming King and a coming Kingdom.

The Message Is Clear Even Though Authors Were Disconnected And Unqualified

Adding to the argument is the fact that the Bible was written by approximately 40 different authors several of whom never knew each other.

They came from a variety of different backgrounds none of which prepared them for writing: farmers, shepherds, kings, fisherman, doctors, and so on. Moses was one of the few trained in a scholastic manner.

Which means they couldn’t confer to get their story straight.

They also didn’t have book stores providing them with multiple copies of previous materials from which to gain a perspective on shared topics. Copies of the Bible were tightly guarded so I doubt successive writers had access to everything written beforehand.

Yet, the focus and the direction of their teaching maintained consistency. Everything pointed to Christ.

They often wrote under duress and said what the crowd didn’t want to hear. Elijah and Jeremiah were threatened for what they had to say. Isaiah was actually executed.

Collusion and conspiracy were not possible under these circumstances but in spite of that, the Bible is very unified on many themes: marriage, salvation, and creation to name but a few.

The Bible does not play favorites

The Bible regularly records the sin of its most prominent figures and it was the sinners who kept the record.

Today’s celebrities may be nonchalant or even proud about their failings and no one bats an eye but the public is very unforgiving toward spiritual leaders whose faults become apparent. In spite of that, the Bible reveals all. No holding back. Evidence that it is genuine.

The Bible never ascribes angelic ora to anyone. Only students of the Bible do that. If the Bible was contrived by humans, they would have surely left out their fail points.

Transmission Of The Bible

“Transmission” is the word we use to refer to the passing of the Bible from one generation to the next. This transmission was done in three forms.

Autographs: The original texts were written either by the author’s own hand or by a scribe under their personal supervision and the original copy was referred to as an autograph.

For example, the Gospel of Luke and the Book of Acts were historical records compiled by Luke but were written under the auspices of the Apostle Paul. We no longer have the original autographs today but we do have reason to believe the copies we do have are accurate.

Manuscripts: These are handwritten copies of the originals.

A handwritten copy of an Old or New Testament book or even just a portion of a book is referred to as a manuscript.

Duplicating the Bible by hand is usually thought of as an argument against the reliability of the Bible, but, in fact, the evidence shows it to be one of the greatest testiments to its accuracy and trustworthiness.

Until Gutenberg first printed the Latin Bible in 1456 (the very first book to be printed), all Bibles were hand-copied onto papyrus, parchment, and paper.

That means that manuscript evidence spans a period of three thousand years. That’s huge! If hand-copying was a source of inaccuracies you would expect to find corruption galore. Instead, you find just the opposite.

The consistency in the manuscript evidence leaves one incredulous!

Translations: When the Bible is translated into a different language it is usually translated from the original Hebrew and Greek. However, some translations in the past were derived from an earlier translation.

For example, the first English translation by John Wycliffe in 1380 was prepared from the Latin Vulgate.

The point here is that even though the wording may change from one translation to the next, the meaning remains remarkably the same.

The Dead Sea Scrolls were discovered in eleven caves along the northwest shore of the Dead Sea between the years 1947 and 1956. They are considered the greatest manuscript discovery of modern times.

Fragments of every book of the Old Testament have been discovered except for the book of Esther.

The Isaiah Scroll, found relatively intact, is 1000 years older than any previously known copy of Isaiah. In fact, the scrolls are the oldest group of Old Testament manuscripts ever found.

If anything, these scrolls have certified the accuracy of the Bible we read from today.

Copying manuscripts was a profession in antiquity. To do this work required special training in detailed procedures.

The Israelites were even more obsessive. Their scribes were trained in the teachings of the Bible and they followed very strict procedures when making copies which included the following:

There was nothing haphazard about this process. Could mistakes happen? Yes! But with so many thousands of manuscripts to compare, we can be very confident that the document we hold today mirrors the originals.

It Is The Most Attested Of Ancient Documents

The best way to fully appreciate manuscript evidence is to compare the numbers. Biblical manuscripts number in the tens of thousands while secular documents from the ancient world number in the hundreds. The closest secular document is Homer’s Illiad and the numbers are in the hundreds, approximately 1800 and none of these leftovers date any closer to the original than 400 years.

The numbers are constantly changing as they find new evidence so I won’t list them here but a quick search will produce scads of numbers for the autophiles.

The New Testament has copies dated within a few years of when the books originated. The youngest document was written almost two thousand years ago.

The bottom line is there is a great deal of manuscript evidence for the Bible and the evidence reinforces the text of the Bibles we carry around today. No other ancient document compares.

The Bible Is Self Endorsing

The Bible makes several claims as to what it is and how we got it.

All Scripture is given by inspiration of God (God-breathed) and is useful for teaching, rebuking, correcting, and training in righteousness.

Do not think that I have come to abolish the Law or the Prophets (the Bible); I have not come to abolish them but to fulfill them. I tell you the truth, until heaven and earth disappear, not the smallest letter, not the least stroke of a pen, will by any means disappear from the Law until everything is accomplished. (Matthew 5:17-18)