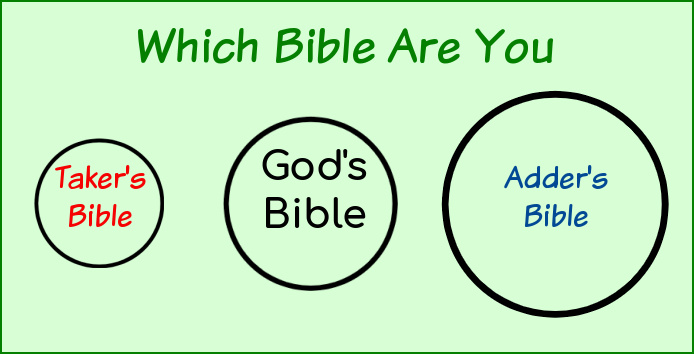 Peter Was More Like A Pharisee
Than A Christian

Most people think the only way to abuse the Bible is to disbelieve it, and that means there are only two kinds of people: those who believe it and those who don’t.

That approach keeps everything simple. The people who believe are OK. Those who don’t are in trouble. Accept or reject. Embrace or deny. In or out. One group is good, the other not.

I’ve got news for you.

There are actually two ways to abuse the Bible. One way is obvious and the other a bit insidious. One group admits to abuse. The other group isn’t even aware.

The obvious way to abuse the Bible is done by people who do not believe the Bible.

They read through it cherry-picking the portions they like and discarding the rest. This approach isn’t an outright rejection but the end result is a complete rearrangement.

I call this the Take-Away approach to the Bible and I refer to the people who do it as Takers.

Adders Are Problematic Too

I call this second class of abusers Adders. These are people who believe the Bible, endorse the Bible, love the Bible, and claim to adhere to it ardently, but in the end, only create confusion by adding more restriction and regulation to what the Bible actually says.

This is not an opinion. The Bible clearly warns against both approaches.

For I testify unto every man that hears the words of the prophecy of this book, If any man shall add unto these things, God shall add unto him the plagues that are written in this book:

The same idea is expressed in Deuteronomy 4:2 so from beginning to end, taking away and adding to the Bible, are warned against. The penalties are not the same but both are considered serious offenses.

Takers Are Aware, Adders Are Not

In case you’re wondering, I’m not addressing those who take away from the Bible. Takers know who they are and aren’t afraid to own it. They are completely aware.

Adders, however, are driven by compliance obsession and are blind to that fact. I’m talking to believers, those that should know better than to add to the Bible but in many cases aren’t even aware that that is what they are doing.

Adding isn’t occasional. It’s been going on ever since Moses – or before – and I doubt it will come to an end any time soon. Without getting into too much detail, consider the following:

This list focuses on the New Testament era but the same thing occurred in the Old Testament. After receiving the Law, religious leaders quickly went to work making extra rules for obeying the law. They came up with 613 in all. These were unnecessary extras.

Making things worse, these rules were disobeyed on penalty of death.

Even when these restrictions aren’t considered necessary for salvation, they are required for acceptance. If you want to be a part of the group, you must act like, think like, and agree with the group.

If You Can’t Agree, You Still Must Respect

Wherever you land on this spectrum of beliefs, you have to admit that it represents a lot of addition, the very thing the Bible clearly says is not allowed.

The problem is these ideas aren’t just diverse. They are diametrically opposite and differences generate a lot of friction.

The people who embrace the various sides are definitely devoted, and we respect that, but they can’t all be right. Someone is right and everyone else is skewed in the wrong direction. How do we manage that tension?

The answer may be found in a question. Why does the Bible pronounce extreme penalties on people who add to the Bible? The truth may be more simple than you think.

But when it comes to spiritual matters devotion to God takes precedence over respect for fellow men. Differences are viewed as an affront to God and fighting ensues.

Turning my cheek is one thing. Turning God’s cheek for Him is another.

If you can’t agree with beliefs you consider wrong, then you have to at least humbly respect the other person’s perspective but that hasn’t been the case.

Adders Don’t Get Along

Religious history is full of conflict. Adders are passionate about their beliefs, to the point of obsession in some cases. Defending those beliefs is a badge of honor.

Never mind the fact that Jesus taught us to turn the other cheek, when one person’s truth is offended by another person’s truth, blood can flow. The cheek thing has little traction with religious zealotry.

In fact, the penalty for transgressing in some religious groups was death. Both Old and New Testament religions regularly engaged in blood-drawing conflicts. Sounds gruesome! And scary!

I’m not suggesting the Bible teaches conflict but that is the outcome when you start adding to the Bible. Groups attack each other over the rules they’ve added in.

The Trail of Blood gives a very brief sketch of the conflict that occurred between religious groups from the time of Christ until now. 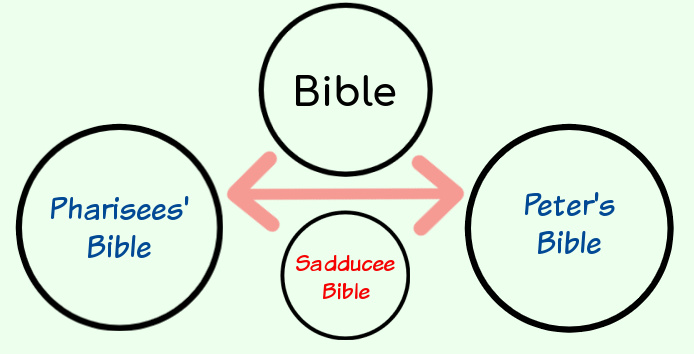 Peter was very much like the Pharisees but also at odds with them, not only because of their differences but because they were both Adders. There were Pharisees in the crowd that came to arrest Jesus and Peter drew his sword in response to them. He was ready to fight.

Don’t be too quick to cheer Peter on, though, because he was also at odds with Jesus, even more so than he was with the Pharisees. At the core of all this sword drawing, arresting, fighting, and dodging are Adders trying to establish their ideas as dominant. Jesus wasn’t a part of that tension.

To be clear, neither Jesus nor the Bible encourages interfaith conflict. This is entirely the result of Adders getting carried away with their own ideas about God and truth.

I could be burnt at the stake just for writing this post. Glad I didn’t live back then.

The Pharisees And Peter Were Both Adders

The idea for this post developed when I was preparing a Bible study based on Peter’s denial of Jesus (Luke 22:54-62). The denial took place immediately following Jesus’ arrest and during His trial by the Sanhedrin.

It never occurred to me before that study that many on the Sanhedrin were believers. Not believers in Jesus but believers in the Bible. Some of them, not all of them.

The Sanhedrin was made up of both Sadducees and Pharisees. Sadducees were Takers. They denied the resurrection and several other key beliefs. Pharisees, on the other hand, believed the Bible.

The Sadducees didn’t recognize Jesus because they couldn’t be bothered. He was political trouble and they didn’t want that. The Pharisees were blinded by all their add-ons.

The High Priest during the time of Jesus was a Sadducee, but there were plenty of Pharisees on the Sanhedrin. There’s a serious observation in all this. At what point do Add-ons become more important than Jesus? At what point are we comfortable allowing our add-ons to obscure Him from view?

Nevertheless among the chief rulers also many believed in him; but because of the Pharisees, they did not confess him, lest they should be put out of the synagogue. (John 12:42)

The Pharisees who did believe in Jesus were afraid of the ones that didn’t. Why? It’s simple. Adders don’t get along with people who disagree. They demand adherence on penalty of ex-communication and in some cases death.

But it also occurred to me during that study that Peter was a Pharisee. We usually think of Peter as being at odds with the Pharisees, and he was to a limited degree, but it wasn’t because he was correct but because he was an Adder.

The Synagogue schools, which he surely would have attended, were organized by Pharisees. There’s no question he was raised to think, believe, and act like Pharisees who were Adders. At the arrest of Jesus, he was probably closer to a Pharisee than he was to Jesus.

How Did Peter Compare To Pharisees

The following comparison shows how close Peter was to the Pharisees. The Pharisees believed:

What did Peter believe?

Peter thought like a Pharisee in every way except where Jesus was concerned.

If Jesus hadn’t repeatedly bent or broken Pharisaical dietary rules (Matt. 15:2), we could understand Peter’s adherence, but Peter had no excuse. Those rules were a major tenet of Pharisaical teachings. Peter continued to lean toward his background in spite of Jesus’ influence.

The above-mentioned context (Acts 10) includes the story of Cornelius, a Roman Centurion in Caesarea. God had to use miracles, visions, angelic messengers, and voices from heaven to coax Peter to visit with Cornelius and share the Gospel. Why? Because Peter was still living under the influence of Pharisaical thinking in spite of the fact that Jesus had clearly said, preach the Gospel to every creature.

Peter wasn’t alone in his Pharisaical mindset. After his visit with Cornelius, he returned to Jerusalem and was immediately confronted by the Jewish believers who required him to explain himself (Acts 11:1-4).

How Did Peter Compare To Jesus

Peter was unwittingly walking more in the footsteps of Pharisees than Jesus – before he was finally converted, to use the word Jesus used. It took a while for him to get there but it might help us to see the picture if we compare Peter to Jesus.

Jesus’ plan was quite clear.

That is what the Bible prophecied and what Jesus taught. Peter, however, was quite different. Peter’s plan was to:

Two observations are needed. Peter’s plan was massively different to what Jesus planned. Peter was very close to the Pharisees but differed wildly from Jesus. He was in no man’s land.

But a second observation is the fact that Peter’s ideas weren’t obviously wicked or obscene. He was badly wrong but not in an obviously outrageous sense.

When Peter drew his sword at the arrest of Jesus, he was fighting for the right person but for the wrong reasons and in the wrong way. Peter was an Adder and what he added took precedence over what Jesus said. We mustn’t let that happen in our lives.

I’ll say more in the next post but for now, THINK!AboutIt.