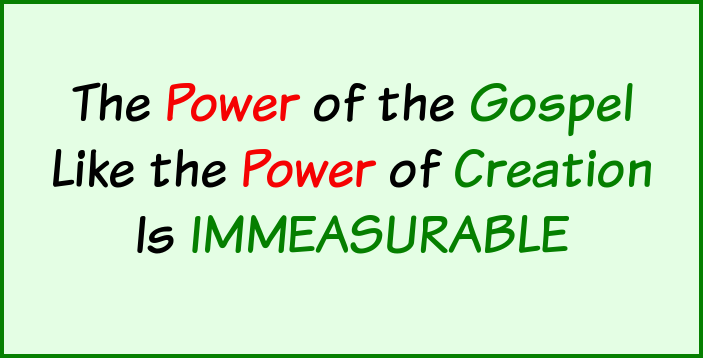 To start, a definition. A very short one because the Gospel is not complicated.

The word Gospel means Good News. That’s common knowledge so we need to extend the def a little and explain exactly what the news is.

Simply stated, the Good News is the death, burial, and resurrection of Christ for the sins of the world. That’s it! And we in the New Testament era – the last two thousand years – are the recipients.

Old Testament folks became believers by believing in the anticipated Messiah and if they were paying attention they could have pieced together details of the Messiah’s sacrifice but the information wasn’t as neatly revealed in the Old Testament as it was in the Person of Jesus.

The point, of course, is that the Gospel is brief but don’t let that brevity fool you. The meaning and intensity of the message are greater than the brevity would indicate.

The Gospel Is Power

To say the Gospel is powerful makes it a comparative issue. The Gospel is more or less powerful than other forms of power but that is not how we understand the Gospel’s power. There are no man-made or natural forces that can measure up.

Gospel power compares only to the power of creation. Believers are even referred to as new CREATIONS!

The Gospel transforms lives completely and forever. Education can transform life to some degree but its effect isn’t very durable. It requires updates to remain relevant.

Food can empower a life physically but only if there’s a constant supply.

One application of the Gospel lasts forever. It’s not like sunscreen. It won’t wear off.

The Gospel Is Accessible

Most power sources are closely guarded. Electricity is supplied to our homes only because power plants are meticulously maintained. Security protocols are also in place to protect against unexpected failures or even attacks. It’s a constant concern.

There are no security fences around the Gospel and no guards to keep you out.

The Gospel Is Resilient

Christians are politically involved, and that’s a good thing, but they must guard against becoming too emersed in the political process. Politics can save no one and, thankfully, will never get in the way of the Gospel.

When politicians and the political process fail, and it will, no worries. The Gospel remains just as available and effective as it always has been.

Politics is an effort to manage society with laws. The Gospel offers a different management principle: Grace. Yes, we need both to maintain a degree of balance but never think politics and the law can diminish the power and availability of the Gospel. The Gospel can survive every political, social, and natural disaster one can throw at it.

EMP’s can damage electrical power. There is no EMP that can effectively disable the Gospel.

Laws come and go and often fail to do what they were intended for. The Gospel never fails, is never diminished, is never supplanted, and never goes away.

The Gospel Has Manners

The Apostle Peter makes an interesting statement about sharing the Gospel.

Always be prepared to give a defense to everyone who asks you the reason for the hope that is in you. But respond with gentleness and respect. (1 Peter 3:15)

That entire verse screams manners. Why would anyone bother to ask us anything if we were arrogant know-it-alls? We must conduct ourselves with humility and grace to provoke the questions and we must respond with gentleness and respect when asked.

The Gospel Is Rational

There two things needed for a person to get saved: repentance toward God and faith in Christ.

These two concepts are easy to understand but not so easy to see.

Repentance means a change of mind. A good example would be the person who is atheistic on one day but then begins to respectfully consider the reality of God’s existence on another.

It’s not a change based on convenience, like planning to eat hamburgers but realizing you had no buns, you eat hotdogs instead.

Repentance isn’t induced by external circumstances or biology. It’s philosophical, rational, intellectual. It happens on the inside and is like a chemical adjustment of the brain.

But how do you get people to repent? Not by preaching repentance!

Instead, we present arguments. Reasoning and logic are repentance-inducing tools that we should use often. Paul is the model here. The Book of Acts records him reasoning with the Jews and proselytes on several occasions and in different locations (Acts 17:2, 17:17, 18:4, 18:19, and 24:25). In some cases, he did this for several days.

In every case, he was arguing for the Gospel and attempting to convince people to believe.

We should follow his example. Rather than throw the Gospel at people, we should find out why they don’t believe and provide sound rationale for thinking differently.

The Gospel Is Needed

Medical doctors don’t have it so easy. They must diagnose each patient’s case before prescribing treatment.

We begin knowing that salvation is the goal and the Gospel is the answer. The difference between us and doctors is patients usually go to doctors knowing they are sick and looking for help.

People aren’t so willing or honest where the Gospel is concerned. We must help people see their need and convince them the Gospel is the solution. But we know this upfront. No guessing involved.

The Gospel Is A Tool

Tools are great to have. We buy them knowing how useful they can be but many times, they corrode in a toolbox waiting for the far-off occasion to use them.

The difference with the Gospel is we don’t have to buy it. We receive it for free and know the benefits from day one. And we never lack situations in which it can be useful. Like tools in a box, the Gospel has no effect till we share it but unlike mechanical tools, it’s always usefu.

The most valuable truth in the world is the Gospel and we have it in hand. Don’t waste the opportunity. Share it. People will be affected.